Lessons from Iraq for Afghanistan 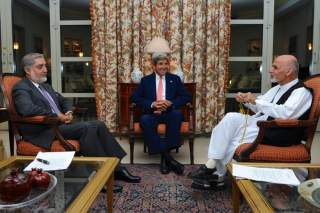 When President Obama meets Afghan President Ashraf Ghani and Chief Executive Officer Abdullah Abdullah (Ghani’s partner in the unity government) this week to discuss the future of U.S.-Afghanistan relations, they must keep the lessons of Iraq in mind. In 2011, when Iraq refused to provide legal protection for U.S. forces if they were to remain in Iraq, President Obama seized the opportunity to fulfill his campaign promise to withdraw U.S. forces from Iraq and declare his Iraq policy a success.

Although the United States and Iraq remained committed to their Strategic Framework Agreement on political, economic and security cooperation, in effect the United States disengaged from Iraq. Withdrawal from Iraq had three interrelated unintended effects. The first was increased domestic polarization. America had been playing a mediating role providing a cushion between Iraq’s Sunni, Shiite and Kurdish communities. With U.S. disengagement, relations between the Shiite dominated government of former Prime Minister Nouri Al-Maliki and the Sunnis and Kurds rapidly deteriorated. The second effect was increased regional interference in Iraq. Iran, Turkey and some Arab States intensified their involvement in Iraq, competing to fill the vacuum left by the United States. This competition among regional rivals and their proxies inside Iraq aggravated the polarization.

In this struggle, Sunni Arabs lost ground and were marginalized. This marginalization and the disintegration of Syria next door led to the reemergence of an extremist terrorist movement, this time calling itself the Islamic State, Daesh or ISIL. The third effect was the disintegration of the large Iraqi national security force that proved unable to deal with the ISIL threat on its own. Without an American combat presence, the Strategic Framework Agreement and the large Office of Security Cooperation inside the U.S. Embassy were inadequate to prevent Iraq’s unraveling and the rise of a new global terror threat.

The unity government in Afghanistan has clearly heeded the lessons of Iraq.  It wants U.S. combat forces to stay in adequate numbers for the foreseeable future. Within hours of being sworn in, the government signed a bilateral security agreement with Washington to include providing suitable protections for U.S. forces in country. Given the existing threats from the Taliban and the Haqqani network, and new threats like ISIL, Kabul recognizes that it needs a continued U.S. and coalition military presence. To encourage continued U.S. engagement, it has dramatically improved cooperation with the U.S. military.

It appears that President Obama is ready to meet the Afghans halfway. According to press reports, the administration has decided to respond favorably to the Afghan request to slow down the pace of withdrawal. The original plan was to reduce the number of U.S. forces from about 10,000 to fewer than 6,000 by the end of 2015. Under the new plan, more U.S. forces would remain in Afghanistan in 2015 and 2016 to assist Afghan forces combat the Taliban and other terrorist groups, including ISIL, who are seeking to increase their presence in Afghanistan. The ISIL footprint in Afghanistan may be quite small today, but it could grow substantially, especially if increased pressure on the terrorist group in Iraq and Syria forces some elements to seek safe havens elsewhere.

Slowing the pace of U.S. withdrawal is a positive step, but may not be sufficient. Afghan forces that have taken the responsibility for the country’s security are likely to face serious tests in the coming fighting season by the Taliban. These Afghan forces are performing courageously despite high casualties. Nevertheless, the U.S. forces will probably have to assist them to prevent Taliban from changing the balance on the ground by seizing major swaths of territory or eroding the morale of Afghan forces.

Two further steps are needed to avoid a repeating the Iraqi debacle.

First, help Ghani on Pakistan. The Afghan President has taken a number of domestically difficult steps to improve relations with Pakistan: sending Afghan army officers to train in Pakistan, using Afghan security forces against Pakistani extremists based in Afghanistan, downgrading relations with India, and improving relations with China and Saudi Arabia. However, as of now, Pakistan has not delivered on its reciprocal commitment to bring the Pakistan-based Taliban leadership—long supported by Pakistani Military intelligence—to the negotiating table and push them to accept reasonable terms for ending their war on Afghanistan. These talks were supposed to start a few weeks ago. The United States should support the peace process by pressing Pakistan to deliver on its commitment. If Pakistan fails to keep its end of the deal, it is likely that Ghani would have to abandon this accommodating approach and take a more hostile stand. Such a development would not serve U.S. interests.

Second, abandon the plan for total withdrawal of combat forces in 2016. The key lesson of Iraq in 2011 was that total withdrawal was premature and left a dangerous situation in its aftermath. The situation in Afghanistan and its neighborhood in 2016 will require a U.S. military presence in Afghanistan for some time to come. The Taliban aside, the threat of global terrorism from al-Qaida and related groups including ISIL will likely grow in 2016. Full withdrawal also would have a negative effect on the peace process because setting deadlines may encourage the Taliban to wait us out.

Maintaining a residual U.S. military presence would also help the United States be better informed and allows for effective and timely responses to threats emanating from the region—such as a Pakistani nuclear weapon or critical components falling into terrorist hands. Keeping a presence also allows the United States take to advantage of unanticipated opportunities, including to go after high value terrorist targets such as al-Qaida leader Ayman al-Zawahiri who remains in Pakistan. Afghanistan, unlike other states in the area, wants the United States to maintain a presence. The administration should respond positively. The longer-term U.S. presence does not have to be large nor open-ended. It should be subject to review at least every five years and end when no longer needed.

Shifting the policy unambiguously on withdrawal by 2016 will not be easy for President Obama. He wants to withdraw U.S. forces from Afghanistan before he leaves office and some of his political supporters will be disappointed. But U.S. interests, based on the experiences of withdrawal from Iraq, the new and continuing threat of extremism and terror, and the changed situation in Afghanistan require such an adjustment. The lessons from Iraq are certainly clear on this point.

Zalmay Khalilzad a Counselor at CSIS was the US Ambassador to Afghanistan, Iraq and the United Nations.