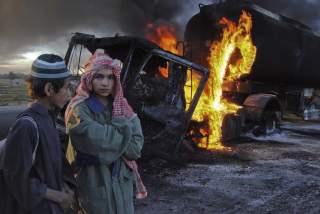 South Asia has one of the highest regional concentration of militant groups in the world, including some of most-wanted jihadist groups by the United States such as Al Qaeda, the Haqqani Network, the Taliban and Lashkar-e-Taiba (LeT). Ahead of the expected U.S. withdrawal from Afghanistan, the Jaish-e-Muhammad (JeM) claimed attack on India’s Central Reserve Police Force (CRPF) in Kashmir’s Pulwama district has revived the concerns of a more lethal and dangerous militant landscape in South Asia.

The Pulwama attack has once again exposed the vulnerability of the two South Asian nuclear rivals, India and Pakistan, to terrorist blackmail, by pushing them to the brink of war. The aftermath of the attack underscores a new phase of militancy in violence-infested Kashmir and renewed hostilities between India and Pakistan. In the absence of joint counterterrorism and extremism frameworks at the regional level, South Asian militant groups will continue to exploit inter-state mistrust rivalries and mistrust to expand and entrench themselves in the region.

Why Is the Pulwama Attack Significant?

The timing of the Pulwama attack is instructive. It came ahead of U.S. withdrawal from Afghanistan indicating a revival and return of groups like JeM, which has twenty-five thousand to thirty-five thousand trained militants, to Kashmir. Since the 2016 Pathankot airbase attack, JeM has steadily increased its presence and activities in Kashmir. After witnessing a dip between 2008 and 2013, violence and militant recruitment has spiked in Kashmir since 2015. The number of militants killed in Kashmir rose from 130 in 2016 to 200 in 2017 and 240 in 2018. In the first two months of 2019, thirty-one militants have been killed in Kashmir.

Moreover, it was a high-profile and mass casualty attack. By ramming an explosive-laden vehicle in the CRPF vehicle-convoy in a highly militarized zone, JeM has demonstrated its ability to find gaps in the security arrangements and high-level expertise of assembling a VBIED. JeM also drew large-scale media coverage following the attack giving the group publicity. For the second time, JeM has successfully exploited India and Pakistan’s adversarial ties to trigger a war between them. The suicide bomber Adil Rashid Dar was a local Kashmiri and JeM recruited him by manipulating his anger and quest for revenge against the Indian state to serve its agenda of “liberating” Kashmir.

India’s retaliatory airstrikes on alleged JeM camps inside mainland Pakistan (after a hiatus of five decades) have redefined the conflict threshold. In 1999, even at the height of the Kargil crisis between the two states, Indian air force did not cross the Line of Control. Indian airstrikes signal a qualitative shift in the Indian position from the strategy of deterrence by denial to deterrence by punishment. Consequently, this will result in a new unstable equilibrium, lowering the threshold of a low-intensity, limited conflict between India and Pakistan over Kashmir. Moreover, the absence of a functional India-Pakistan crisis management mechanism further increases the probability of a limited conflict.

The United States and international community’s response to the Pulwama attack and its aftermath is also pertinent. Instead of urging both India and Pakistan to desist escalations; for the first time, the United States and international community acknowledged India’s right of self defense and emphasised de-escalation only after Indian airstrikes on alleged JeM camps in Balakot. Barring China, no other country condemned India’s violation of Pakistani sovereignty. This will have long-term implications on strategic stability and balance of power in South Asia. The Pulwama attack has also witnessed emergence of new interlocutors in India-Pakistan tensions such as China, the United Arab Emirates (UAE) and Saudi Arabia.

South Asian Militant Landscape After the U.S. Exit from Afghanistan

Following its intervention in Afghanistan in 2001, the United States forged a counterterrorism alliance with Pakistan to track and hunt Al Qaeda remnants in the Afghanistan-Pakistan border region. In order to ensure smooth and uninterrupted Pakistani cooperation, among other things, the U.S. facilitated a border ceasefire agreement between India and Pakistan in 2003. The agreement required Pakistan to curb cross-border terrorism in Kashmir and take action against India-focused militant groups on its soil in return for normalization of relations by India.

A possible U.S. exit from Afghanistan will create a new victory narrative for the Afghan Taliban, which will embolden South Asian jihadist groups earning them fresh recruits and funding. If this were to happen, then it will be a déjà vu of the late 1980s when Afghan Mujahedeen groups defeated the former Soviet Union. Following the U.S. intervention in Afghanistan in 2001, several jihadist groups abandoned their primary agendas and sent their fighters to Afghanistan to help the Afghan Taliban fight the United States. Some factions of these groups also joined hands with various Al Qaeda-linked groups, such as Jundallah and the Punjabi Taliban. These groups will use Afghanistan as a launch pad to regroup and relaunch themselves in different local conflicts in South Asia with a new zeal.

At the policy level, Pakistan’s response to against the JeM militants and its elaborate network is critical. Kinetic measures against militant groups such as sanctions, arrests and crackdowns will only be helpful in the short-term. Non-kinetic measures like creating a counter ideological narrative and a comprehensive deradicalization and rehabilitation plan would be equally necessary to create incentives for JeM members to shun militancy. The larger LeTquestion is how will Pakistan create a counter ideological narrative against JeM without compromising on the state’s identical stance on Kashmir? Moreover, rehabilitating a large number of militants (twenty-five thousand to thirty-five thousand) will require a lot of time, resources and a strong political will by the Pakistani military and political leadership. In 2002, when the military regime of Gen. Pervez Musharraf banned JeM and took action against its cadres, the group retaliated with two assassination attempts on him along with carrying several high-profile attacks inside Pakistan. So, in case, another round of crackdowns is initiated against JeM, a serious backlash cannot be ruled out. Moreover, if JeM splinters as a result of heavy-handed crackdowns, some of its members might gravitate towards groups like Islamic State of Khorasan, Al Qaeda in the Indian Subcontinent or Tehrik-e-Taliban Pakistan.

Unlike other regions such as the Association of Southeast Asian Nations and the European Union, South Asia has limited regional mechanisms to counter and prevent terrorism. Notwithstanding formidable challenges, counterterrorism cooperation in South Asia is pivotal to overcome the challenge of transitional militancy and terrorism. Given the regional nature of terrorism, state-centric counterterrorism responses at the country level would only achieve limited and short-term results in South Asia. In August 2018, India and Pakistan jointly participated in counterterrorism drill “Peace Mission 2018” in Russia under the Shanghai Cooperation Organisation auspices. So, a similar arrangement under the South Asian Association for Regional Cooperation framework is conceivable.

India and Pakistan could forge a common front against groups like Al Qaeda and Islamic State of Khorasan, and then they could later extend that front to other threat groups like LeT and JeM. A regional forum for cooperation having requisite expertise and authority should be created to iron out differences hindering counterterrorism cooperation. The forum would also be helpful in removing mistrust and create working relationships between counterterrorism officials of different countries. The joint counterterrorism forum should create different task forces to coordinate various efforts to curb terrorism recruitment, financing and cross-border movement. Equal attention should also be paid to information sharing and intelligence, joint training programs, law-enforcement, border patrolling and operations.

Without India-Pakistan cooperation, such initiatives will remain elusive. India and Pakistan, beyond blame games, will have to dispassionately discuss the security challenges arising out of various terrorist groups operating in the region. India’s offensive posturing against Pakistan whenever a terrorist attack takes place on its soil remains over-simplistic and only addresses a miniscule part of a larger security challenge that necessitates concerted and continuous joint efforts.

Abdul Basit is an associate research fellow at the S. Rajaratnam School of International Studies (RSIS), Singapore. He can be reached at [email protected].