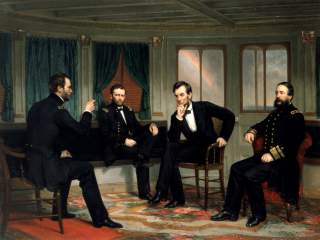 Nowadays storytelling often gets a bad rap, as though it’s a matter of spinning fiction or eluding the truth. With a master fabulist in the White House, it is certainly easy to think so. But the best presidents understand that part of their job is to frame their era and the policy debates we have as part of broader narratives. “That’s our job,” Barack Obama once mused to his aides. “To tell a really good story about who we are.”

This is perhaps the most important reason why Goodwin’s book is so welcome right now. At a moment that could turn out to be as consequential for America’s future as the eras defined by these four presidents, it is essential that we draw on these lessons of the past. We must do so not simply to understand the larger historical context, but for inspiration for how to make things better. While this book is meant to help educate leaders, I don’t expect Trump to pick it up. But one hopes that many fellow citizens do.

IN OVER 350 pages, Goodwin never once mentions the current occupant of the White House. Yet he hangs over her book like an ominous tangerine cloud. On almost every page, one cannot resist reflecting on how Trump compares, and to read this book at the same moment his presidency is becoming unhinged—mired in seamy scandals, flailing hourly on Twitter and shattering democratic norms—is depressing.

If the episodes Goodwin describes comprise a master class of presidential leadership, Trump is the opposite. Reviewing the list of seventy leadership principles Goodwin derives from these presidents, Trump fails to follow nearly every single one. And that’s part of the point: no matter how often he peddles preposterous claims to fellow world leaders about his popularity relative to Lincoln’s—or asserts to journalists like Bob Woodward that “nobody’s ever done a better job” as president—it is impossible to read these stories of progress and think Trump will fare well in the eyes of history.

But this book poses a deeper question: when the story of our own turbulent time is written, how will the American people be judged?

“There [is] something of ill-omen amongst us,” the twenty-nine-year-old Lincoln warned in one of his first speeches, in which he argued the “proud fabric of freedom” was imperiled by “the jealousy, envy, and avarice, incident to our nature.” As Goodwin explains, this speech to the Young Men’s Lyceum of Springfield in 1838 bears special relevance today. For Lincoln worried about a country growing distant from the ideals of its revolution, in which “towering” egos—men like “an Alexander, a Caesar, or a Napoleon”—would seek to exploit “wild and furious” passions “to the task of pulling down,” threatening the very existence of our constitutional system.

Lincoln’s words are uncomfortably familiar. Yet he points the way forward. When such despots appear, he said, “it will require the people to be united with each other, attached to the government and laws, and generally intelligent, to successfully frustrate his designs.” This means having an informed citizenry inspired by history to “appreciate the value of our free institutions,” committed to building a “new temple of liberty” erected on “the solid quarry of sober reason.”

All this may sound pollyannish, but we’ve been here before. Goodwin’s work is therefore a call for optimism and a reason for hope. It provides a reminder that the keys to America’s future are not unknown or alien to our history; they lie within our past. What’s required is the courage to reclaim the kind of leadership Lincoln exemplified as president—and the kind of citizenship he called for 180 years ago at the Young Men’s Lyceum.

His closing words of that speech are so bizarrely relevant they deserve repeating. Appealing for a citizenry of “general intelligence,” “sound morality” and a “reverence for the constitution and laws,” Lincoln hoped for a future in which—no joke—“to learn the last trump shall awaken our Washington.”