Lessons from Russia in Avoiding a Quagmire 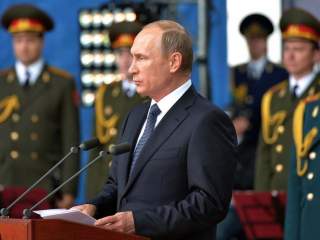 As all sides weigh in on why President Putin decided to “withdraw” from Syria, Russian military action presents lessons for the United States on how to conduct future wars. The primary lesson seen in Syria was remarkably simple: clear and concise goals trump grandiose visions of regime change or nation building when intervening in conflicts. Washington’s unclear and changeable goals in Syria have enabled the Russians, a rival with drastically smaller military, financial and diplomatic tools, to deal an embarrassing blow to the Obama administration. Learning from these mistakes can enable the United States to make better decisions before engaging in future conflicts.

The first step Russia took to avoid a quagmire in Syria was identifying its interests in Syria’s civil war. Many analysts have examined this in recent months. The most convincing reason was to support the Assad regime. Some have argued that the announced pullout of Russian forces is due to soaring financial costs or war fatigue, but this does not address the fact that Russia’s stated war aims were met. As far back as October, Russian officials said that they sought to bolster the Assad regime and to help him take back as much territory as possible. While Syrian Army gains have been limited, they did succeed in putting the rebel forces on the defensive in key areas and have them worrying that Russian backed gains could be permanent. Despite speculation on Russia’s “true” intentions, the fact is that Russia felt its client was threatened with collapse, intervened, stemmed rebel advances, started counter attacking and now are leaving with loyalist forces stabilized and on the offensive. Russia may have hoped Assad could have taken all of Syria back, but Assad himself appears to be the only one to think this. Russia set out to preserve the regime for now and has stabilized Assad by reversing the tide against loyalist opposition, effectively completing the war aims it publically set out to accomplish.

The second step Russia took in Syria was focusing on who their allies and enemies were. Early on Damascus and Moscow made this very clear, all enemies of the Syrian regime are considered terrorists. The Syrian Ambassador to Russia explained this logic in that the goal was not just to destroy ISIS, but all of the other rebel groups in Syria, since they are purported to have the common goal of “spreading terror.” Clearly defining enemies ensured that allies were on the same page. These allies composed of those who had a stake in the Assad regime surviving, which is a mix of the Syrian Army, Iranian volunteers and Hezbollah. Analysts like Michael Kofman have pressed this point, saying that there are two wars going on in Syria, the U.S./Allied campaign to fight ISIS and the Russian/Syrian/Iranian war to fight all opposition. Moscow had flexibility in how to conduct its intervention in Syria due to these largely unified ground forces. Thus, not needing to deploy many ground troops, Russia was able to focus on other sub objectives, such as improving coordination between its service branches, testing new military systems and showcasing weapons systems for exports. The Russian military was able to focus on providing support for these players, with minimal worry of losing too many of its own forces.

The primary problem for the United States has been the lack of clarity of its goals in Syria. White House officials went from saying that Assad must go to more wishy washy language, and now have settled on stating that “it is not clear” if Assad must go. If Washington’s aims are to remove Assad and to defeat ISIS, neither goal seems within reach any time soon. Given the fluid nature of stated U.S. goals in the war, it is not even certain that these will be achieved. The ambiguous goals are highlighted by the crossing of the infamous red line. Ambiguous promises of taking action while letting state or non-state actors cross thresholds unabated leads the world to question American credibility. If U.S. leaders are to take a stand, they must be clear on goals and intentions so that allies are not led astray.

The U.S. coalition in Syria demonstrates the weakness alliances have when constructed with vague and changeable goals. The anti-ISIS coalition has been largely unable to achieve its goals due to conflicts between supposed partners. The United States is having trouble training and even identifying allies in Syria. In some cases, proclaimed partners are in outright conflict, such as the struggle between the Turks against the Syrian Kurds. While the Russian coalition is united in fighting anti-regime forces, Syrian Kurds are trying to carve out a state, the Turks are running guns to Turkmen or Islamists (depending on what sources one wants to believe) while fighting Kurdish insurrections, and the Sunni Gulf Kingdoms are shadow boxing Iran. These conflicting goals, which at times mean the Russians are supporting American Kurdish allies, are further reducing U.S. chances of accomplishing any of its vague goals in the region. The Russian alliance has been consistent in its approach to fight those that oppose the regime. The United States must adopt guiding objectives and collaborate with allies willing and able to achieve them before getting involved in another conflict.

Before throwing weapons, money or bombs at new and old conflicts, the United States needs to sit down and ask: What are the goals and what is the time frame for intervention? Are U.S. allies willing and able to support such moves? What are the parameters for withdrawal? Russia, perhaps due to limits on money and manpower, created realistic and short-term plans and executed them. The United States can better conduct its foreign affairs and international interventions if it seriously considers its objectives, establishes alliances with unified goals, and pursues the objectives without reservation.

Blake Franko is an editor at New Century Strategist and Researcher on defense topics in Russia, Eastern Europe, and Central Asia.