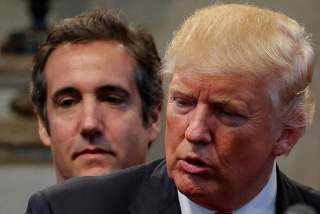 If you can’t impeach a president for lying about sex, then can you impeach one for buying the silence of a mistress? Common sense says “no,” but that won’t stop Democrats from making the most of Michael Cohen’s guilty plea to a campaign-finance violation involving Donald Trump and his alleged affairs.

For a year and a half, President Donald Trump’s enemies have tried to make him out to be a new Nixon embroiled in a second Watergate, one that will end his presidency far advance of the voters having their say in November 2020. The more obvious comparisons between Trump and former President Bill Clinton somehow never get drawn by this president’s critics. But the parallels are unmissable. Even as Robert Mueller’s Russia investigation has failed to come up with evidence of a grand conspiracy between Trump and Putin to steal the 2016 election, various Trump associates—including Cohen and Paul Manafort—have been going down for tax evasion and similar petty crimes characteristic of sleazy political operators. The name “Webster Hubbell” comes to mind.

Is it in fact a “campaign contribution” if your client is a candidate for office and you pay for a woman to keep quiet about an affair with him? It plausibly is, but it takes no stretch of the imagination to think that payments like this would have been made whether or not Trump was a candidate. Did Trump really order Cohen to make the hush payments, or is Cohen making that up as part of his plea? It’s easy to take the answer for granted, but it may be harder for a prosecutor to prove. Whether a prosecutor could even bring a case against the president is an open question: the Justice Department has twice, in 1973 and 2000, issued guidelines that say a sitting president cannot be prosecuted. There is a constitutional paradox involved in a subordinate executive branch official attempting to bring an executive action—an arrest and prosecution—against the occupant of the office that is the constitutional source of all federal prosecutorial power. Americans would be treated to the spectacle of a campaign-finance violation related to sex, which would raise fundamental questions of constitutional structure that would have to be examined by the Supreme Court.

And then? Whatever the court would rule, half the country would reject the decision. Democrats would howl, just as they did in the 2000 recount, that a verdict in favor of the Republican was illegitimate because the court has a Republican majority. If the Supreme Court decided against Trump, however, grassroots Republicans who already believe courts are too powerful and politically meddlesome would surely remain loyal to the president, and Republican politicians would have little standing to defy their most intensely engaged voters. The rule of law would take a beating either way as a result of a prosecution over a matter of the smallest practical consequence.

All of this makes the odds of President Trump being charged for what Cohen says he did on his behalf very small. That leaves open the question of what political consequences Cohen’s confession will have. One possibility is that it will lead to Donald Trump’s impeachment.

But this possibility, too, is rather small. If Republicans retain control of the Senate after this November, then it’s difficult to conceive of a scenario in which a two-thirds majority of the chamber votes to remove Trump. Even narrow Democratic control of the Senate would probably not be sufficient. For most Republican senators it would be political suicide to support Trump’s removal, so long as Republican voters remain supportive of the president. Try to imagine campaign-finance law being the issue that turns those voters against their man in the White House! A good many grassroots Republicans don’t believe there should be any campaign-finance laws in the first place. And the law in this case is of dubious application and about a trivial sexual subject-matter.

Needless to say, it would be embarrassing for both parties to have to reverse their oh-so-principled stands on sex, crime, and impeachment from two decades ago—or at least it would be embarrassing, if either party felt a need to be consistent. The political damage to “domestic tranquility” from a futile impeachment effort would be much more serious: Republican voters would feel personally attacked, as if Democrats were trying to reverse the outcome of the 2016 election; Democratic activists would feel as if they were righteously defending the rule of law in the face of Republican contempt for the Constitution. In 1998, the politics of impeachment worked out to the Republicans’ detriment: voters looking ahead to impeachment dealt the GOP a historic reubke in that year’s midterm elections. This year, Democrats will make great gains in the House of Representatives no matter what, one can predict with some confidence. But that does not mean that impeachment would be without its electoral hazards: a certain failure to remove Trump would only whip Trump’s base into a frenzy, while possibly alienating common-sense voters for whom impeachment over sex-related infractions seems petty. Painful and pointless impeachment proceedings could work to Trump’s advantage in 2020—and they could poison American politics far into the future even if the Democrats prevailed in the near term.

Watergate was a more serious scandal than anything Trump, or for that matter Bill Clinton, has gotten into trouble over. But even Watergate, which saw a Republican president voluntarily leave office—at the behest, in part, of conservative leaders like Barry Goldwater and James Buckley—inflicted wounds on the national psyche that have never healed. The diminished stature of the president under Gerald Ford led Nixon-Ford staffers like Donald Rumsfeld and Dick Cheney to support a far more assertive presidency after 9/11. Both parties after Watergate went out of their way to try to frame their enemies’ scandals as a replay of Nixon’s downfall: Republicans were eager to inflate Bill Clinton’s shady Whitewater dealings into a Democratic Watergate, while Democrats thought Iran-Contra was a Watergate that would bring down Reagan, and now—getting ahead of the paltry evidence—they insist that collusion with the Kremlin is Trump’s Watergate. Since that storyline has not lived up to its hype and shows little promise of doing so, Cohen’s guilty plea has become the newest basis for fantasies of prosecution and impeachment. Fantasies are one thing; to try to live them out will be dangerous for the country.

Impeachment is a constitutional dead letter—it amounts to theatrics unless the nation is truly unified in horror at a president’s criminal acts, which is not the case now and was not so in 1998 either. Prosecution of a sitting president is constitutionally dubious and would be tantamount to a revolutionary act if undertaken for minor offenses involving covering up sexual embarrassments. American politics does not need these sideshows which threaten to unleash real chaos upon American public life. If Trump is as bad a president as Democrats say he is, they should have no trouble beating him in 2020. The proper place to get a verdict on a president is not in a court of law or a Senate impeachment hearing, but at the ballot box. The only exception should be in a case of national emergency that unites the country—otherwise partisans will inflate every pretext into a spurious emergency, and sooner or later that inflation will give rise to a real constitutional and public crisis.

Daniel McCarthy is editor of Modern Age: A Conservative Review.