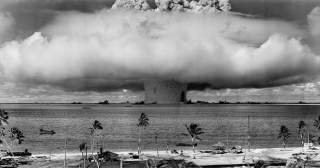 America’s policy of opposing the proliferation of nuclear weapons needs to be more nuanced. What works for the United States in the Middle East may not in Asia. We do not want Iran or Saudi Arabia to get the bomb, but why not Australia, Japan, and South Korea? We are opposed to nuclear weapons because they are the great military equalizer, because some countries may let them slip into the hands of terrorists, and because we have significant advantage in precision conventional weapons. But our opposition to nuclear weapons in Asia means we are committed to a costly and risky conventional arms race with China over our ability to protect allies and partners lying nearer to China than to us and spread over a vast maritime theater.

None of our allies in Asia possess nuclear weapons. Instead, they are protected by what is called extended deterrence, our vaguely stated promise to use nuclear weapons in their defense if they are threatened by regional nuclear powers, China, North Korea and Russia. We promise, in essence, to trade Los Angeles for Tokyo, Washington for Canberra, and Seattle for Seoul, as preposterous as that might seem.

In order to avoid such a test of our will, the United States attempts to contain China in particular, but others as well, via a conventional force buildup—the so-called pivot to Asia. We station tens of thousands of troops in Japan and South Korea, and are expanding our presence in Guam, Australia, Singapore, and the Philippines. The conventional challenge is China’s ability to deny access for US forces in or near the island chains that are our Asian allies and that at the same time guard China. As China’s military grows the access issue becomes more problematic because of China’s ability to saturate the zone with missiles and aircraft that can threaten our military presence. The Air-Sea Battle operational concept, a costly networking of missile defenses, long-range-strike capabilities and naval forces has been the US military’s response. Billions are being spent by the United States to assure our Asian allies of our will to protect them conventionally as well with extended nuclear deterrence.

But there is a better, cheaper way to provide security in Asia. We should encourage our allies to acquire their own nuclear weapons. With nuclear weapons Australia, Japan and the others would have the capability to protect themselves from bullying. Nearly all of the allies are rich enough and technologically advanced enough to acquire and maintain nuclear forces. And those who are not—the Philippines, for example—lose much of their vulnerability once the focus shifts away from conventional defenses of the island chains. Nuclear weapons helped prevent the Cold War from turning hot. In Asia they can stop a conventional arms race that is forcing the United States to invest in weapons that can block the Chinese military on its doorstep, thousands of miles from our own. Let our Asian allies defend themselves with the weapon that is the great equalizer.

Tailored proliferation would not likely be destabilizing. Asia is not the Middle East. Japan, South Korea, Australia, and even Taiwan are strong democracies. They have stable political regimes. Government leaders are accountable to democratic institutions. Civilian control of the military is strong. And they don’t have a history of lobbing missiles at each other—they are much more risk-averse than Egypt, Syria or Iran. America’s allies would be responsible nuclear weapon states.

A number of Asian nations have at one time or another considered going nuclear, Australia for example, with tacit U.S. Defense Department encouragement in the 1960s. They chose what for them was the cheaper alternative of living under the US nuclear umbrella. Free nuclear guarantees provided by the United States, coupled with the US Navy patrolling offshore, have allowed our allies to grow prosperous without having to invest much in their own defense.

Confident that the United States protects them, our allies have even begun to squabble with China over strings of uninhabited islands in the hope that there is oil out there. It is time to give them a dose of fiscal and military reality. And the way to do that is to stop standing between them and their nuclear-armed neighbors. It will not be long before they realize the value of having their own nuclear weapons. The waters of the Pacific under those arrangements will stay calm, and we will save a fortune.