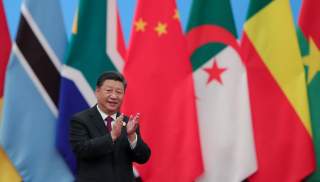 It is reasonable to assume that China would have little or no experience in any dire economic contagion across Africa. The one primary example, the take-over of Hambantota Port, was an isolated incident during calmer times, before the financial uncertainty stoked by a slowing global economy or the current U.S.-China trade war. Moreover, the port takeover has now become a watershed moment in Chinese behavior that has attracted significant international scrutiny and ire.

The Chinese Pot May Not Produce

In ways unforeseen and unanticipated, China may economically wear out its welcome sooner, rather than later in Africa. For American policymakers considering the myriad of ways to employ the new Africa strategy, less may be more. Perhaps America should cautiously standby as China stumbles. Unfortunately, if China falters, the short-term prognosis for African nations may be unsavory. Economic hardship will be widespread. Some influence will be ceded to China at the risk of African sovereignty, but only at the risk of China further alienating more Africans. As China adjusts and curtails its financial commitments and collects on its defaults over the long-term, additional cycles of overreach and retrenchment may ensue. During this time, it is imperative that America stay ready, vigilant, and willing to assist or mitigate the adversity faced by those afflicted or endangered by China’s rapacious economic maneuvers.

The concept of “Let China Fail” will face criticism. Naysayers will spurn this strategy and nod to China’s superior wait-them-out or long-term, over-the-horizon investment mindset. But this is a moot point as the previous colonial powers held similar enduring plans for their African possessions, only to face eventual ruin. The marathon of Great Power Competition with China remains globally, but the sprint in Africa may be limited. Others may point to the “Let China Fail” strategy as a retrenchment or appeasement, a surrender of not only African partners and allies, but also American interests. On the contrary, “Let China Fail” does not necessarily mean that America withdraws from Africa, rather America should continue to maintain its key African relationships and interests. As circumstances dictate, it may behoove America to consider and implement an expanded or more targeted, focused set of responses. These could be linked to the developing “Prosper Africa” initiative and other core American interests like health and wellness. There may even be opportunities to work with China where it is beneficial for shared American and African interests. Yet, letting China fail may permeate beyond the African continent to other precarious global investments such as the $20 billion in faltering loans to Venezuela or $2 billion in marginal infrastructure loans to Papa New Guinea. Against the backdrop of Great Power Competition, China’s insolvency in Africa may augur further declines and checks around the globe. In retrospect, it is worth remembering that it was China that pursued its “Going Out” and Belt and Road Initiative in Africa. As such, China should ultimately reap what it sows in Africa. It is China who should be beholden and accountable for its economic behavior and actions as America, Africa, and the world watch the cooking pot.

Wilson VornDick is a China analyst and commander in the Navy Reserve with service in Africa. These are his personal views and are not associated with a U.S. government or U.S. Navy policy.