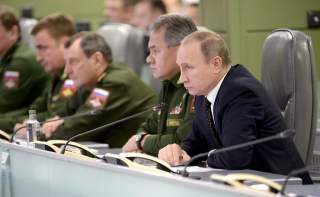 The Syrian agreement recently concluded by Secretary of State John Kerry has spurred guarded optimism for a solution to the five-year-old conflict. In exchange for a ceasefire between the Assad regime and U.S.-backed rebels, the United States and Russia have agreed to coordinate airstrikes against ISIS and Jabhat al-Nusra, the local Al Qaeda affiliate.

While the likelihood is slim that the ceasefire will hold, the fundamental problem isn’t the deal’s implementation. Rather, the reality that in a shattered Syria, neither airstrikes nor rebels will achieve America’s chief goal of dislodging ISIS.

From the beginning, our policy in Syria has suffered from an inherent contradiction. The United States insists on Assad’s ouster as a condition of peace, but the groups that have proven most effective against his forces are hardline Islamic militias, which are themselves anti-American.

For years, the United States has ignored this fact and continues to arm and train “moderate” rebel groups. This has fed costly failures, such as a $500 million Pentagon project which trained only five fighters.

In other cases, U.S.-sponsored groups saw many members either defecting to Nusra or transferring U.S.-supplied weapons to them. By continuing to arm and support the opposition, despite clear signs of the regime’s resilience, the United States ultimately helped transform the initial uprising into a bloody stalemate that destroyed the country and produced millions of refugees.

Despite carrying out nearly five thousand airstrikes and killing thousands of ISIS fighters in Syria since 2014, the United States has neither defeated ISIS nor prevented it from carrying out devastating attacks abroad. Similarly, when Russia entered the conflict with an extensive bombing campaign against opposition forces in 2015, the possibility of a victory against Assad largely disappeared.

The Kremlin’s forceful intervention in Syria has presented the United States with a set of stark choices. One option would be direct military intervention to resolve the conflict in terms the United States finds favorable. This is neither practical nor advisable. Despite prioritizing the conflict for some time, Washington has correctly recognized that Syria does not constitute a core strategic interest justifying a military assault and ensuing occupation.

The status quo alternative is equally unappealing. Continuing the proxy war against the regime will only leave the nation divided, lawless and perpetually in conflict. Arming the rebels has proven to be bad policy compounded by intransigence, and the present reality is that Assad is here to stay.

Despite its current economic weakness and the military strain of a simmering conflict in Ukraine, Russia has demonstrated an ironclad commitment to the survival of its client state. Instead of continuing on the current path, the United States should seize the opportunity to let Russia take up the Syrian millstone.

Washington should formally end its support of the rebels and withdraw its air assets from Syria, with the understanding that Russia and Assad are now responsible for the country’s future. This would have three key benefits:

First, it would allow the United States to extract itself from an expensive and unwinnable disaster, particularly as Turkish-Kurdish fighting complicates the conflict by pitting one U.S. ally against another.

Second, it would force a major rival (Russia) to own the burden of restoring order to a ruined nation and bear the cost of failure.

Finally, the Assad government, which is hostile to Islamists and has repeatedly vowed to re-conquer the country, would have to do the fighting and dying necessary to defeat ISIS on the ground.

Permitting a regime victory might sound unconscionable, but for the nation’s millions of traumatized and displaced civilians, peace, even under Assad, is by far preferable to their current reality. The Syrian government, while barbaric, never posed a real threat to American security, and is unlikely to do so in the future. Should they win on the ground, their success would drive ISIS out of Syria, and might finally make it possible for the Iraqi government to re-conquer its country.

The choice is not a pleasant one. However, it is the outcome that best safeguards U.S. interests within the harsh constraints of one of the world’s ugliest conflicts.