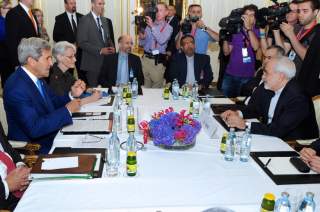 While the rise of the Islamic State in Iraq and the Levant (ISIL) has triggered parallel efforts and possible tacit cooperation between the United States and Iran to address this common threat, Washington and Tehran have been concurrently working to prepare for a new phase of negotiations to reach an agreement on the latter’s nuclear program. As nuclear talks are slated to resume on September 18 in New York ahead of the annual UN General Assembly, the United States and Iran have already met bilaterally on two separate occasions since extending the Joint Plan of Action (JPOA) in late July, indicating their respective interest of negotiating a comprehensive agreement by the extended November 24 deadline. Indeed, now is the time to finally resolve the longstanding nuclear dispute with Iran. As the world faces major international crises, such as the rise of ISIL, the events in eastern Ukraine and the ongoing Israeli-Palestinian conflict, the relationship that was once marked by brinksmanship is now among the most stable and contained international issues facing both Washington and Tehran, at least until the extended November deadline. The United States, the other members of the so-called P5+1 and Iran must come to terms on a comprehensive agreement in the coming months as only a marginal chance exists for the JPOA to be extended once more, and presumably only if significant headway is made in the upcoming rounds. If the JPOA is allowed to expire without a comprehensive agreement replacing it, the United States and Iran could find themselves again on the brink of conflict, perhaps not in the near term, as the international community confronts ISIL, but potentially in the medium-to-long term.

To be sure, the JPOA signed between the P5+1 and Iran last November has thus far achieved its intended purpose, to pause Iran’s nuclear program, regress it in some areas and increase its transparency, while offering Tehran limited economic-sanctions relief. Indeed, according to the latest report issued by the International Atomic Energy Agency (IAEA), Iran has limited its uranium enrichment to 5 percent (LEU) and reduced its stockpile to below 7,800 kilograms; and diluted its 200 kilogram stockpile of 20 percent enriched uranium or converted it into fuel for the Tehran Research Reactor, which should be sufficient for its lifespan. Iran has also refrained from developing its heavy-water plutonium reactor at Arak and has reduced the opacity of its uranium enrichment processes by allowing daily IAEA inspections at the Natanz and Fordow nuclear facilities. For their part, the United States and the European Union have eased their economic sanctions on Iran for a limited time, originally until July 20 and now until November 24 as result of the JPOA’s extension.

Obstacles to a Comprehensive Agreement

The JPOA’s success and the progress made on key issues, including the future of the heavy water reactor in Arak and the uranium enrichment facility at Fordow demonstrate that bridging the divide between the P5+1 and Iran to achieve a comprehensive deal is not impossible. To this end, the two sides will have to agree to the size and scope of Iran’s nuclear program, as well as the duration of a comprehensive agreement all the while avoiding political pitfalls at home.

Arguably the most difficult issue to surmount will be determining the capacity of Iran’s uranium-enrichment program under a comprehensive agreement. Iran has declared that it wants to reduce its reliance on the international market for LEU to fuel its light water plant in Bushehr by developing an industrial-scale, uranium-enrichment capacity consisting of nearly 200,000 first-generation IR-1 centrifuges in place by the time its supply contract with Russia expires in 2021. On the other hand, the P5+1 are calling for Iran to reduce its centrifuges from 19,000, of which about 10,000 are currently operating, to a maximum 4,000 IR-1 centrifuges in order to prolong Iran’s breakout time to more than six months. To power Bushehr, the P5+1 believe that the most efficient way forward would be for Iran to extend its fuel-supply contract with Russia.

Outside experts have outlined creative solutions addressing Iran’s uranium capacity that could satisfy both sides’ interests in the long term. For example, former White House Director of Non-proliferation Jofi Joseph suggested that Iran keep its current composition of 10,000 operational centrifuges if Tehran agrees to export its LEU stockpile; this would satisfy Iran, which wants to maintain its current nuclear infrastructure and the P5+1, which wants the least amount of enriched uranium as possible on Iranian soil. Other ideas recently presented jointly by the International Crisis Group and the Arms Control Association propose that Iran limit its number of centrifuges during the length of a comprehensive agreement in exchange for continued nuclear research on more advanced centrifuges for later use after the deal’s expiration. Likewise, Robert Einhorn, formerly the Secretary of State’s Special Advisor for Non-proliferation and Arms Control during the Obama administration, suggests that Iran agree to limit its enrichment capacity to several thousand IR-1 centrifuges or a small number of IR-2 centrifuges so as to meet Iran’s legitimate nuclear requirements over the next few years and once the comprehensive deal expires, Iran would be free to expand its program to a large-scale capability. Through this approach, the P5+1 achieve its goals in the near term, while Iran achieves its objectives in the longer term.

The second issue facing the P5+1 and Iran in reaching a historic deal is determining the length of the comprehensive agreement. The P5+1 are looking for an agreement that spans decades while Iran would like it to last a few years. Iran analyst Trita Parsi opines that “Iran will likely reject a deal that lasts beyond 10 to 15 years,” due to the mutual distrust that exists with the United States as well as the uncertainty surrounding the future leadership in Washington beyond President Obama’s time in office. The United States has mentioned the necessity to have an agreement that is in the double digits, implying that a final solution must last at least a decade to allow for sufficient mutual confidence building.

A third issue that could impede negotiations is the unfriendly domestic political environment that the Obama and Rouhani administrations face at home. In the United States, the Obama administration successfully thwarted congressional efforts earlier this year at enacting additional sanctions which would have been in contrary to the terms of the JPOA. However, it seems that some in Congress and hawks within the Beltway are resuming their pursuit of additional sanctions against Iran. Recently, Senators Mark Kirk (R-IL) and Marco Rubio (R-FL) introduced the Iran Human Rights Accountability Act of 2014 into the Senate, which would impose additional sanctions on Iran, among other things. In Iran, if President Rouhani fails to deliver a nuclear agreement, the political tide will turn against the Administration in favor of the hardliners who are impatiently standing by to reassert themselves in all aspects of Iranian domestic politics and foreign policy.

Signing a comprehensive agreement with Iran will peacefully resolve a hotly disputed international-security issue, preventing a disastrous military conflict that would have conflagrated the broader Middle East beyond the turmoil it is already experiencing. A historic agreement will provide the United States, the other members of the P5+1 and the world at large guarantees that Iran’s nuclear program is peaceful in nature, as Tehran has proclaimed it to be all these years, by constraining it and significantly increasing its transparency. Successfully negotiating an agreement by the extended deadline will also likely mean that Iran will fulfill its commitments under the cooperative agreement with the IAEA, of which two outstanding issues remain for it to be complete; Iran is possibly delaying its completion until it determines whether a comprehensive agreement is attainable. More broadly speaking, meeting the extended deadline could also usher in a new wave of near-term and open U.S.-Iranian cooperation on global issues, such as the threat posed by ISIL. It is quite clear that a comprehensive agreement can only benefit global security and stability.

Navid Hassibi is a Non-Resident Fellow with the Washington DC-based Nuclear Security Working Group and a doctoral candidate with the Research Group in International Politics at the University of Antwerp. He is the author of Deterrence in an Era of Iranian Nuclear Proliferation. He tweets @navidhassibi. The views expressed here are his own.