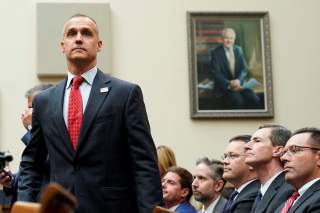 Yesterday Corey Lewandowski testified before Congress for the fourth time. He went in front of the House Judiciary Committee, and hewing to the White House-instructed line, proved a difficult, and unhelpful witness to the Democratic majority.

“Corey Lewandowski vying to be for Trump-Russia hearings what Pat Buchanan was to Watergate hearings and Ollie North was to Iran-Contra hearings,” tweeted James Antle, editor of The American Conservative.

Lewandowski was no doubt inspired by such performances but failed to live up to them. Both Buchanan and North broke expectations by their aggressiveness, going on the offense against congressional questions and twisting their opponents with rebuttals. While Buchanan and North testified at the peak of their respective investigations, and their performances held real political consequences, the Trump-Putin espionage conspiracy is already a dead letter. Hearing Lewandowski testify is just sweeping up.

The official reason for Lewandowski testifying was a June 19, 2017, event described in the Mueller report. Lewandowski dictated a message from President Donald Trump that he was instructed to give to then-Attorney General Jeff Sessions. It was the content of a speech Sessions was to give, explaining his regret over recusing himself from the special counsel investigation, how Trump was innocent of all accused wrongdoing, and that Sessions would limit the investigation to only future election interference. Due to scheduling conflicts, Lewandowski was unable to deliver the message immediately. A month later, on July 19, Trump followed-up and asked about the message. Lewandowski reiterated that it was in transit, before giving it to White House staff member Rick Dearborn. Dearborn decided not to deliver it to Sessions.

The stonewalling began immediately. Committee Chairman Jerrold Nadler (D-NY) asked if Lewandowski had in fact met with Trump on the date described. Lewandowski asked for a physical copy of the Mueller report, what page Nadler was referring to, and where on the page he was supposed to look. “Do you not have an independent recollection of whether you met with the president on that date?” Nadler asked. When he was provided the report, and asked again, there was a sustained silence as Lewandowski read the section to himself, eating into the Chairman’s five-minute question period.

This set the pace for the rest of the hearing. “Congressman, the White House has directed I not disclose the substance of any discussion with the president or his advisors to protect executive branch confidentiality,” Lewandowski told Nadler. The invocation of executive privilege is why the House Judiciary has been unable to subpoena Dearborn or former White House counsel Don McGahn for public hearings. It is a strained use in Lewandowski’s case, since he never worked in the executive branch.

Lewandowski likely hopes to use yesterday’s hearing, where he spent five hours thumbing his nose at congressional Democrats and touting his loyalty to the president, as a platform for launching a campaign for Senate. Lewandowski plans to challenge incumbent New Hampshire Sen. Jeanne Shaheen in 2020. His opening statement consisted of his biography, praise for his performance as Trump’s campaign manager during the 2016 primaries, and the malfeasance of the Obama administration and the FBI. During the first hearing recess, he launched a rudimentary campaign website, headlining Trump’s endorsement.

“Excuse me Mr. Lewandowski, this is my time. You are not yet in the Senate. You are a witness before the Judiciary Committee, please act like it,” said Rep. Pramila Jayapal (D-WA) when Lewandowski attempted to interrupt her.

Other Democrats didn’t have much luck. He had a verbal spat with Rep. Sheila Jackson Lee (D-TX), whose question period ended with Lewandowski saying, “It was just a rant.” Rep. Steve Cohen (D-TN) unleashed a torrent of media headlines describing Lewandowski as an “enforcer,” as the witness nodded along to the description. Rep. Hank Johnson (D-GA) said getting an answer out of Lewandowski was as hard as “a fish being cleaned with a spoon.”

Perhaps the only Democrat to extract something of value from Lewandowski was Rep. Eric Swalwell (D-CA), who got him to admit that he had taken dictation from Donald Trump multiple times before the June 2017 meeting, making the description in the Mueller report inaccurate.

Republicans, on the other hand, had no interest in prying information from the potential Senate candidate. In a tag-team effort, Rep. Matt Gaetz (R-FL), a conservative backbencher and media hound, asked Lewandowski to describe the motives of his Democratic colleagues since House decorum rules restricted him from doing it himself. “I think they hate this president more than they love their country,” Lewandowski responded. Gaetz smiled.

“I’m glad to hear he favors the Patriots, even though it wasn’t in the Mueller report,” said Chairman Nadler.

Nadler concluded the meeting by declaring he’d take holding Lewandowski in contempt of Congress “under consideration,” as it was suggested by several disgruntled members.