Libya and Iraq Were Never the West's to Lose 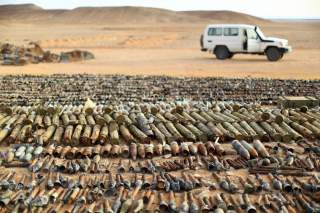 Rather than casting about for villains who betrayed the noble enterprise of rescue, it’s time to center our focus on the experiment itself. The central fact of these wars is that we are breaking states, not just rescuing people, and doing so in the optimistic expectation that the rescued will reform their countries in shapes that we approve of. This experiment has not been uniformly successful. The word “intervention” is inadequate as an account of this exercise and its radical quality. Iraq from the outset, and Libya as it evolved, were not merely efforts to “step into” a conflict. They were revolutionary wars to overthrow states.

It has proven remarkably easy to overlook this reality. When defenders of the Libyan war such as Shadi Hamid claim that creating something like “a stable democracy...was “never the goal. The goal was to protect civilians and prevent a massacre,” they have forgotten their own claims at the time. In August 2011, Hamid claimed that the “lesson” of Libya was the “decisive” role of “external actors” in “the Arab struggle for freedom.” By August 2011, that is exactly what the war had become. It grew beyond a limited exercise in preventing atrocities, into an effort to overthrow a government and bring freedom to an afflicted people. They may wish to forget it, but those who backed the intervention articulated high hopes. It is reasonable to judge the adventure by the standard its own advocates set.

That Libyans and Iraqis decided that they would exercise sovereignty in ways that diverged from Western preferences is not a complicated observation. Yet it is striking how difficult we find it to stomach. This says something about Western attitudes towards the whole business of liberating the oppressed. Are we liberating people in the expectation that they will be free to do what we want them to do? We rejoice when their tyrants fall and their statues are torn down. We lament when those same liberated people exercise their newfound sovereignty to make decisions that don’t suit us. Instead of confronting that reality, we develop a self-flattering narrative, that the fate of ‘rescued’ societies is all about us, our commitment and willpower. Ultimately, we seem to regard the liberated not as agents but as objects. Yet we are not always central players in the drama, and cannot confidently expect to steer the liberated in our direction. This realization, that sometimes even the West can only hope to exert power on the margins, struck even the late Fouad Ajami, a keen believer in America’s historical mission in the Middle East: “America should not write itself into every story: There are forces in distant nations that we can neither ride nor extinguish.”