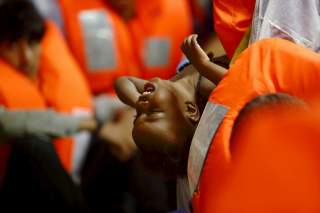 Only in properly reforming and addressing its currently policy towards Libyan asylum seekers, internally displaced, and the refugees, can the EU authentically uphold its mandated ethical obligations of solidarity and shared responsibility and also ensure its own political future.

Sajid Farid Shapoo is a Middle East watcher and former Indian Police Service officer with the rank of two-star general. He is a highly decorated counterterrorism expert with over eighteen years of experience in high profile security related assignments. He holds a master’s degree from Columbia University with specialization in Middle East.

Image: A migrant baby on the Migrant Offshore Aid Station (MOAS) ship MV Phoenix waits to be transferred to the Norwegian ship Siem Pilot off the coast of Libya August 6, 2015. An estimated 700 migrants on an overloaded wooden boat were rescued 10.5 miles (16 kilometres) off the coast of Libya by the international non-governmental organisations Medecins san Frontiere (MSF) and MOAS without loss of life on Thursday afternoon, according to MSF and MOAS, a day after more than 200 migrants are feared to have drowned in the latest Mediterranean boat tragedy after rescuers saved over 370 people from a capsized boat thought to be carrying 600. REUTERS/Darrin Zammit Lupi