Libya's New Unity Government is Anything But 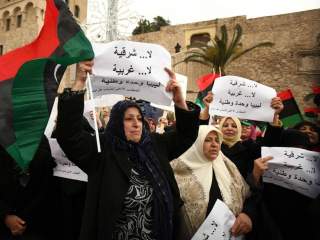 On March 30 the Presidential Council, the executive body of the UN-backed Government of National Accord (GNA), Libya’s presumptive unity government, landed in Tripoli by sea, following several months of being forced to convene in Tunis since its formation as part of the Libyan Political Agreement (LPA) in January. Since that time, the council has worked to gain political power in the divided country, including by appropriating government facilities in Tripoli, such as the Central Bank and the National Oil Corporation, as well as freezing the assets of political opposition members. While the international community hailed the Presidential Council’s arrival as the coming of Libyan unity, events on the ground suggest this is far from reality.

The mere arrival of the Presidential Council sparked fierce fighting between various militia groups that support it, and those that support the Tripoli-based General National Congress (GNC), which still intermittently occur. On April 5, dissident members of the GNC unilaterally announced the body’s dissolution and reformation as the State Council, its designated role under the LPA. However, on April 6, the GNC announced that these members do not represent the GNC, which is still functioning and opposes the GNA. So while the GNA’s political power and support have undoubtedly grown in recent weeks, it is still a far cry from having substantial control over anything. It is still politically challenged in its own intended capital city by a rival government that is at least partially active, and which enjoys the armed support of some of the militias in and around Tripoli.

Furthermore, for months now, the Tobruk/Bayda-based House of Representatives (HoR), the GNA’s designated legislative body, has been unable (or unwilling) to hold a voting session to authorize the body, as the LPA requires through numerous constantly renewed “deadlines,” most recently on April 18. In fact, the HoR failed to approve the LPA to begin with, which prompted the Presidential Council, growing impatient with the HoR’s lack of resolve, to start implementing it unilaterally. This further exacerbated the objection of some of the HoR’s opposition to the GNA, which sees the Presidential Council as marginalizing and circumventing its own legislative body.

But more importantly, this form of “passive objection” also allowed the HoR to postpone the implementation of the GNA without publicly rejecting it outright. This way HoR members that object to the GNA, seeing it as a challenge to their own aspirations of sovereignty, block its formation without attracting the negative international attention and potential ramifications that will accompany an official vote against what the UN, at least, considers a unity government. This creates a recurring cycle in which the Presidential Council continues constructing the GNA without ratification, as they are operating on borrowed time—but by doing so also discredit its own domestic status, by sanctioning political opposition from the HoR, which has time working in its favor.

To make matters worse, Gen. Khalifa Hifter, the commander of the Libyan National Army (LNA), one of several armed factions in the country, announced on several occasions that he will not support the GNA until it is ratified by the HoR. While Hifter is a very controversial figure among Libyans, he still rallies support from more armed groups compared to anyone else in the country, not only via his role but also through personal loyalties, making him a key element for any future political progression. Hifter is unlikely to forfeit his public role, and will therefore expect to maintain his primacy as a military commander even under the GNA, either by commanding a future Libyan Army, or by being appointed the defense minister.

However, he has not been offered either of these roles so far—precisely because of his divisiveness. So the intricate HoR-Hifter relationship, in which the former grants legitimacy to the latter in return for armed support for its interests, makes the two mutually dependent, contributing to the passive objection to the GNA. The major successes the LNA experienced in Benghazi over recent months, after more than a year of stalemate, as well as the expulsion of ISIS from the majority of Derna (at least partially attributed to the LNA) significantly boosted the prestige of the LNA and HoR, and therefore may build their desire to strive for political hegemony and continue procrastinating the GNA vote.

It is premature, to say the least, to hail newfound unity in Libya. While the GNA has gained significant traction, it still faces two major formal political obstacles: the need for the GNC to relinquish control in Tripoli, and the ratification of its status by the HoR. Even if it will be able to pass these political hurdles, it will still need to address numerous other obstacles on the ground; chief among these is bridging the wide array of conflicting ideologies and interests among the country’s various political and armed groups.

Therefore, the best possible outcome for Libya, and the one that seems least likely at the time of writing, will see a single domestically and internationally recognized government which struggles to exert its full control over a country in which various competing groups will still fight each other to maintain their interests. The worst, which currently appears the most likely, is the formation of yet another competing government that will only aggravate Libya’s chaos.

Oded Berkowitz is an Intelligence Manager and Senior Analyst specializing in the North Africa region at MAX Security Solutions, a geopolitical and security risk consulting firm based in the Middle East. He tweets at @Oded121351.