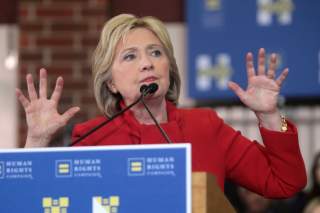 Now Hillary Clinton is even lying to students. Does the woman have no shame?

She recently spoke at a high school in a Cleveland suburb and claimed “Ohio would gain 376,000 jobs under my plan and lose more than 123,000 jobs under Donald Trump’s plan. This jobs forecast was from a report prepared by Mark Zandi, “somebody who advised John McCain back in 2008, so you know [said Hillary] that, no, he’s not a Democrat.”

Too bad the nonpartisan public-interest group FactCheck.org was around to expose Hillary’s latest “short circuit” of the truth: Mark Zandi is a registered Democrat as well as a major donor to the Democratic Party and the Clinton presidential campaign.

As if this isn’t enough of a blow to Zandi’s credibility, Zandi never actually served as McCain’s adviser but merely as a hired data gun.

What really frosted FactCheck.org about the brazenness of Hillary’s “say it enough and they’ll believe” strategy was this:

Democrats frequently cite his [Zandi’s] work to bolster their arguments, and then quickly note that Zandi was once an adviser to McCain’s presidential campaign. In other words, the Democrats imply, even one of their guys says our plan is better. That’s misleading, as we and other fact-checkers have noted time and again.

Instead of fighting over how many jobs in Ohio Clinton vs. Trump might create in the future, let’s simply look at how many jobs Bill and Hillary Clinton’s bad trade deals have already helped destroy in the Buckeye State.

According to Public Citizen, NAFTA has resulted in the loss or displacement of 34,900 jobs in Ohio—and about 700,000 in the United States. In addition, Ohio lost another 106,400 jobs due to “the rise in the trade deficit with China since it joined the World Trade Organization.”

It would be refreshing if Hillary Clinton owned up to her mistakes in supporting both NAFTA and the Made in China trade. Instead, she lies to teenagers in the sanctity of a high school and wants American workers to believe she’s on their side. The only abiding truth here is that Hillary will say whatever she thinks you want to hear. Surely, voters in this presidential election won’t be fooled.