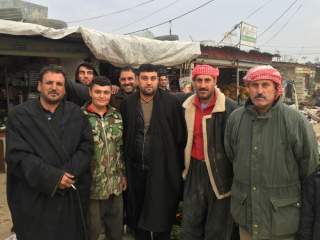 The Yazidi shopkeepers in Snuny, in northern Iraq, have a warmth about them that belies their circumstances. A year ago their town was liberated from ISIS by Kurdish peshmerga forces. The hope was that some of the 250,000 Yazidis who fled ISIS after the extremist group began massacring them and selling women into slavery would return to these tranquil plains. But the men, and it’s mostly men who have come back to tend their shops, say life here is impossible. “It’s very difficult to speak of the future. We were surrounded by Arabs, we are afraid of them returning,” says forty-year-old Hussein. “This is still a military zone, there is no electricity, we have nothing.”

In August of last year ISIS swept across northern Iraq, conquering thousands of square kilometers, an area approximate in size to the state of Connecticut. The extremist group had already taken over many of Iraq’s large Sunni cities, such as Mosul, Tikrit and Falluja between January and June 2014. Mount Shingal (“Sinjar” in Arabic) in northern Iraq is the center of this large district, which was home to diverse groups, including 250,000 members of the minority Yazidi faith. The religion of this group is not open to outsiders, but its origins are indigenous to Iraq and has diverse influences, including Islamic Sufi traditions. For hundreds of years, the group has been persecuted by Sunni Islamic rulers and accused of being heretics. Many Yazidis describe these persecutions as seventy-three individual genocides. They consider the mass killing by ISIS in 2014 as the seventy-fourth.

When ISIS established itself in Mosul, it gained a reputation for brutal persecution of minorities. Christians were ordered to convert or leave and their houses were marked with an Arabic letter “N.” According to locals, the Iraqi army abandoned its positions before ISIS invaded Shingal, leaving behind Kurdish peshmerga. ISIS advance was aided by having captured two brigades’ worth of Iraqi army military equipment just before August.

This large area had been disputed between the Kurdish Regional Government and the Iraqi central government before 2014. Some Yazidi men had previous experience fighting alongside Kurds during the rebellion against Saddam Hussein, and in the 1990s. One of those was Qasim Sheshu. Born in 1953, Sheshu maintains his headquarters near the Sherfedin shrine which sits just below the south slopes of Mount Shingal. A burly man with an ample mustache, he describes being awoken at 3:30 am on August 3, 2014 with reports that ISIS was attacking all over the district. Along with a handful of other Yazidis, he tried to resist the ISIS advance. Many Yazidis had heard through friends that extremists in Mosul and Tal Afar had already begun killing Yazidis. Several unlucky villages were overrun by ISIS after local Arabs who supported the extremists told the minority group not to flee, that everything would be fine. Many of those I spoke to recall this local collaboration as a factor that has forever changed their feelings of security here.

Sheikh Nasser Pasha, a Kurdistan Democratic Party (KDP) official in liberated Shingal town and former commander who fought ISIS in the mountains, says that ISIS arrived with “this Islamist idea of superiority and fascism, like Hitler and Mussolini, they killed them [Yazidis] for their religion and also because [Yazidis] are Kurdish.”

Although most Yazidis ended up in refugee camps, around 85 percent of the people according to Vian Dakhil, a Yazidi member of Iraq’s parliament, some 20,000 remained behind on Mount Shingal. Today the tents these refugees live in can be seen dotting the valleys and along the main road. The circumstances of the refugees are wretched. Khansa Shamdin, a Kurdish surgeon from Syria who volunteered to come to the mountain in September 2014 by helicopter, runs a small free health clinic for local people. Around 120 a day make the long journey to the clinic, which is in a caravan, but they say that besides this they receive little to nothing from the international community.

After Kurdish peshmerga forces, with some 8,000 Yazidi volunteers among them, retook Shingal town in November, there was hope that some of the refugees would return. But a closer look reveals that the town is in total ruins. Explosive devices left behind by ISIS, which created a network of tunnels to obscure their positions, are being cleared daily. There are still some 100 Yazidi villages and hamlets in the hands of ISIS where 150,000 people once lived.

“They want to come back,” says Sheshu, “but only if someone will help rebuild this area and we receive weapons to defend it.” Many Yazidis who have tried to stay here, such as Sheshu, Nasser and the shopkeepers, are dismayed that their coreligionists are fleeing to Europe. Some called them “cowards,” but others had sympathy. “The positive thing from this war is that many people [choose to] fight and struggle to defend their land. The negative is that many are fleeing to Europe,” says Nasser.

For many other Yazidis the trauma of last year lives on. Niswan Zalud, a twenty-two-year-old who runs a small shop in Shingal, says his uncle’s daughter is still held by ISIS. This is a reminder that 3,600 Yazidi women are estimated as remaining in the hands of the extremists. There is a feeling that a return to any of the villages would be impossible without accounting for all the people ISIS killed and kidnapped. Some seventeen mass graves have been located south of Shingal, and two north of it. These contain the bodies of more than 1,000 men and several hundred elderly women that were killed in August. There are thought to be more than twenty other mass graves in areas still held by ISIS. The genocide has forever ruined relations with the Arabs who they used to know as neighbors. The speed with which their neighbors turned on them and raised the black flag of ISIS means that many say they will not come back—unless there are security guarantees or a partition of the district.

Without a major investment by the international community and the Kurdistan Regional Government, which controls this area now, the refugees will not come home. With only one or two health clinics and no schools and barely functioning electricity, people cannot return. Most Yazidis speak of being abandoned. “We are asking the international community to free the girls and women held by ISIS and recognize what happened as a genocide,” says Hussein in Snuny.

Seth J. Frantzman is a Jerusalem-based journalist who holds a PhD from The Hebrew University of Jerusalem. He returned from a weeklong reporting trip to Kurdistan on December 21.