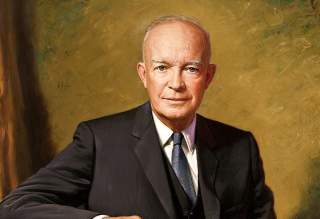 Developed by the renowned architect Frank Gehry, the monument had been the subject of a protracted battle—one that lasted far longer than the thirty-fourth president’s two terms in office. Critics worried about its cost and size, traditionalists scoffed at its unorthodox design and Eisenhower’s descendants claimed it was too modest, failing to evoke the glories of Ike’s military and political career.

In the end, the site—which will be known as “Eisenhower Park,” marked by a steel tapestry with eight-story-high columns spread over a four-acre public space—reflects a compromise among the different ways we remember Eisenhower: the everyman from Kansas and the commanding general who liberated Europe; the reluctant, neophyte politician who was beloved by the public, modernized campaigning and tried to remake the Republican Party; and a presidency that evokes a simpler time, yet charted America’s global dominance and presided over the rise of the national-security state.

Such controversy over how Eisenhower should be memorialized is not surprising, because his legacy has never been a simple one. Ike’s political opponents on the right and left initially defined him as an amiable old duffer who could never quite rekindle his World War II heroism. This popular perception prevailed for several decades. Yet since the 1980s, when the Eisenhower archives started opening up, a revisionist interpretation gained momentum. Scholars suddenly heralded Ike’s “hidden hand” approach, marked by deceptively sophisticated thinking and disciplined decisionmaking.

Today, Eisenhower is considered one of the all-time greats. In a 1962 poll asking historians to list the finest presidents, Ike placed twenty-second. In 2018, he ranked seventh. Part of this popular rise can be attributed to the rise of an Eisenhower canon from scholars such as John Lewis Gaddis, Richard Immerman and David Nichols, who have scoured the archives to praise Eisenhower’s strategic acumen; from journalists Jim Newton, Evan Thomas and Bret Baier, who have written fast-paced histories of Ike’s presidency; and from personal reminiscences from writers like Ike’s grandson, David.

This spasm of admiration for Eisenhower also reveals something about our contemporary political culture, helping to explain the resurgence of scholarship and why the controversy over the memorial in Washington proved so intense. There is nostalgia for the seeming simplicity and tranquility of the Eisenhower years, although even a cursory study of them offers a reminder of how turbulent they actually were. But more significantly, there is great admiration for Eisenhower’s leadership style of careful discipline and hard-headed pragmatism, and a longing for a commander in chief with such a strong vision, dignity and fundamental decency. Simply put, there are not many leaders in Washington right now who are like Ike.

When reflecting on what’s roiling America today, the Eisenhower era seems especially relevant. It is impossible to revisit this history and not hear the echoes. Because whether it is the buckling of America’s system of global alliances and partnerships, the triumph of “America First,” the questioning of science and devaluing of expertise, or the coarsening of America’s political discourse and promotion of dark conspiracies about enemies lurking within, we are witnessing a full-frontal assault on the very country that Eisenhower helped create.

William Hitchcock’s The Age of Eisenhower thus arrives opportunely. Hitchcock, who teaches at the University of Virginia, skillfully synthesizes earlier scholarship and draws on new archival research to offer the best single account of Eisenhower’s presidency to date. This is an eighteen-wheeler of a book—it is big and confident and full of interesting stuff. Some scholars may harrumph that Hitchcock does not fundamentally alter the view of Eisenhower or reinterpret his most consequential policies, but he offers a lively and insightful exploration of how Ike’s brand of no-nonsense leadership defined an era.

Eisenhower has always confounded observers. “Other than optimism and pragmatism,” James Reston of the New York Times asked in 1956, “what skills did Eisenhower possess that made him such a political phenomenon?”

Ike was a study in contrasts. His political persona was a throwback of modest middle-class simplicity, yet he helped usher in the modern campaign era with slick tv commercials and Madison Avenue image advisers, and hung out with corporate chieftains on the most exclusive golf courses. He championed a can-do spirit of hard work but spent a lot of time on vacation or convalescing from numerous health crises (a heart attack, stroke and ileitis). He often spoke with circumlocutions and vague statements that cloaked a sophisticated mind and deep understanding of politics and policy. He created the massive infrastructure of the national-security state, but then eloquently warned of its dangers. He sought to restrain the use of military power, but in fact diversified and deepened American interventions and expanded its global commitments—using the CIA to help overthrow governments, increasing foreign military assistance so others could do the fighting for us and doubling down on the use of invasive intelligence assets like the U-2. And while he was at best personally ambivalent about the social transformation of civil rights, Ike allowed his Justice Department to take bold stances with the Supreme Court and confront Southern leaders’ attempts to defy the law.

Eisenhower entered office determined to consolidate the gains of the war he had led. Before Ike turned to politics, Harry Truman had enlisted his support to make the case to Congress for America’s role in Europe and a strong NATO—and he fought hard against the “America First” impulse that was championed by Republican Ohio senator Robert Taft. Although Eisenhower and Truman had a bitter falling out—with Ike calling his predecessor feckless, and his attorney general later publicly accusing Truman of allowing a communist spy to remain in his U.S. government job—Ike largely continued the Cold War strategy that Truman established. Writing in 1955, Reinhold Niebuhr observed that Eisenhower stood for “95 per cent of the foreign policy of the previous administration.” Hitchcock largely agrees, crediting Ike for putting America’s national-security policy on solid footing—both in terms of resources and public support.

More than any other modern president, Eisenhower was a strategist. He read Clausewitz, studied at the Army staff college and had been tested in war. This experience gave him a keen sense of how to match means to ends, and he instinctively understood the essence of “grand strategy,” where foreign and domestic policy are linked and must be considered holistically. Ike also understood that good process helps make good policy, so he created and closely managed the modern national-security decisionmaking system, presiding over hundreds of formal nsc meetings that helped produce a mountain of strategic documents (this voluminous record is one reason Ike has become the subject of so much good scholarship). And he delivered several important speeches to outline his approach and make the case for his decisions.

The heart of Eisenhower’s strategy was to restore greater balance in national-security policy by taking the fight to the Soviets and projecting American power, while also ending costly wars like Korea and putting the defense budget on a more sustainable footing. From today’s perspective, when politics is again dominated with questions about America’s staying power and calls for nation building at home, Eisenhower’s stark warnings about the difficult trade-offs between priorities at home and abroad and the danger of “humanity hanging from a cross of iron”—as best described in his remarkable 1953 “Chance for Peace” speech, which tried to reframe the Cold War following the death of Stalin—are bracing. They also help illustrate how the political ground has scrambled on many of these questions—where once a Republican president was seen as an eloquent advocate for a national-security approach of quiet strength and careful allocation of defense dollars.

His overriding goal was straightforward: to navigate strategy between the extremes of isolationism and cynical hysteria (as personified by Taft and Wisconsin senator Joseph McCarthy) and weak incompetence (as Ike perceived Truman and Adlai Stevenson) to put U.S. policy on a sustainable footing. Instead of rolling back America’s global commitments, the Eisenhower era saw them grow and diversify. While working to develop new global partnerships and alliances, he also added to the toolbox of America’s influence by pushing for weapons modernization and innovations in covert action. And while known for avoiding wars—the only time Ike ordered U.S. troops into harm’s way was in 1958 in Lebanon—Eisenhower expanded the means to project American influence. This included taking actions that remain controversial, such as fomenting coups in Iran and Guatemala, launching a CIA paramilitary campaign in Laos and setting the stage for the Bay of Pigs in Cuba.

This presents a paradox for Eisenhower’s legacy: the roots of trouble lay buried in many of his strategic successes. For example, consider the examples of Eisenhower’s restraint, perhaps most notably his decision not to come to France’s assistance in Vietnam in 1954. For decades historians have carefully studied and argued over Ike’s handling of Dien Bien Phu, and while Hitchcock does not unearth new evidence, his interpretation of events is quite rewarding. Ike proved to be neither a hawk nor a dove; he wanted to keep the United States out of direct conflict (following the mantra of “no more Koreas”), but at the same time wanted to use other tools to try to prevent Vietnam falling to communism, such as providing arms and political support to the French. This policy decision avoided conflict yet set the United States on a course for greater involvement in Southeast Asia. As Hitchcock eloquently observes, Ike’s decisions planted “seeds that would yield a harvest of sorrow.”