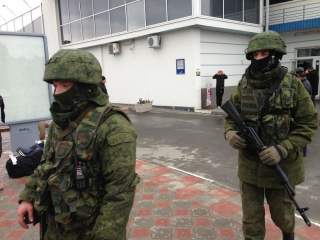 EUROPE NEEDS to rearm and defend itself to cope with a new military threat. The American security umbrella—in both its conventional and nuclear forms—is no longer adequate, particularly on NATO’s vulnerable eastern flanks. Indeed, the extended deterrent provided by the United States to its most exposed allies may not be well suited to inhibiting attacks similar to Russia’s recent incursion into Ukraine, which displayed all the hallmarks of the newly popular limited conventional wars—brief and decisive, violent and yet very restrained. The purpose of such conflicts is to achieve a quick fait accompli in a geographically circumscribed area through limited force—in this case, paramilitary means followed by Russian regular forces. It is difficult to deter such a threat through the promise of retaliation, which by its very nature must occur after the facts on the ground have already been changed. A threat of retaliation is simply less credible when the enemy has achieved his objective through a low-intensity action. What are needed instead are strong local military capabilities—a preclusive defense—that increase the costs of that limited attack. Europe must start to defend its border rather than indulge in the belief that the traditional formula for deterrence, based on retaliation and the extended deterrent provided by the United States, will suffice. It won’t.

WHEREAS LIMITED warfare went out of fashion in the West after Vietnam, Russia regards it as a central part of its military doctrine. It has practiced it in Georgia, Crimea and eastern Ukraine, and presumably rehearses it elsewhere. It is therefore imperative to study anew the challenges presented by such a form of sanguinary behavior. “Limited wars” have several distinctive features. First, they are characterized by self-imposed restraint in the political objective sought and the level of force used. The aggressor could escalate the confrontation, but chooses not to. The purpose of limiting the use of force is to avoid some reaction that would undermine the political objective sought in the conventional assault. In the case of today’s Russia, the purpose is to extend influence and control westward without eliciting a strong response from NATO and the United States. Moscow recognizes the clear military superiority of its main rivals and consequently desires to avoid a pitched confrontation that it would lose. Hence, its use of force is calibrated to be sufficient to conquer pieces of Ukraine but not so large and violent that it would prompt a unified political, economic and military reaction from the West.

Russia is as clear regarding what it wants to avoid as it is concerning what it wants to achieve. Moscow’s objectives are limited: a small and quick territorial grab rather than a massive invasion (at least for now). There is no drive to the capital (Kiev, in this instance) or attempt at full conquest but instead a speedy push inside the neighboring state followed by a sudden, self-imposed stop. It is a “jab and pause” style of war fighting meant to achieve a swift and limited fait accompli. A rapid conquest of Crimea or parts of eastern Ukraine is followed by a pause and apparent openness to seek a mutually acceptable negotiated settlement. But the limited objective has already been achieved, and the quick suspension of violence is a sign of the satisfaction of the original goal.

A limited war is also characterized by limited means. The aggressor state carefully tailors its methods to the goal it wants to achieve—and the reaction it wants to avoid. Minimal violence is employed. The potential for escalation is made clear but held in reserve. In the case of the Crimean invasion, the Russian operation started anonymously with unmarked troops (dubbed “little green men” by Ukrainians), an indication that Moscow was uncertain about how local Ukrainian forces would react. In the event of determined opposition, Russia maintained the option of either escalating with larger forces or, should Western powers come to Ukraine’s aid militarily, halting the operations of the unmarked troops.

The aggressor, in fact, constantly has to weigh the value of the limited objective against the risk of the rivals’ response. The higher the value of the objective, the more risk it is willing to accept. In Ukraine, it is plausible that Moscow’s desire to avoid a military clash with NATO members (including in the form of Western-armed and -trained Ukrainian forces) is greater than its desire to occupy Crimea. Russian military might is impressive when compared to that of its neighbors, but Moscow cannot sustain a prolonged conflict with Western-supported forces and certainly cannot do so against NATO member states. But the risk of a Western military response was and remains negligible, and Russia achieved its objective in Crimea with ease.

TWO MAIN challenges present themselves when crafting a response to a limited war waged by a rival. First, it is politically difficult to answer a restrained military attack. As the Crimea case illustrates, Western policy makers face significant hurdles when attempting to mobilize public opinion in support of a stiff diplomatic—much less military—response to low-scale aggression. Moreover, the tentative nature and high speed of the initial attack complicate the formation of a responding coalition, whose potential members are naturally divided as to the most appropriate answer to that limited push. The sign of a successful limited war is the absence of a strong concerted response, the reaction that the attack wanted to avoid in the first place. Russia’s self-imposed restraint in Crimea gave Moscow the advantage it sought.

The second difficulty is that when faced with a limited attack, the targeted country cannot trade space for time. The objective pursued by the attacking party is limited, most often geographically. The conquest of a small, carefully delimited piece of real estate is the goal of the aggressor, and if the defending country abandons that territory in the hope of buying time to develop a response, it ipso facto allows the enemy to achieve its objective. Consequently, defense in depth—the practice of initially yielding territory and then counterattacking—is useless in such a case. Russia does not appear interested in conducting a military conquest of Ukraine in its entirety, and seems for now to be satisfied with only Crimea and perhaps parts of eastern Ukraine, if it can hold them. In this scenario, defense in depth would simply give the aggressor what he wants, one bite at a time, as the Ukrainians quickly discovered. Whatever the reasoning behind Kiev’s initial decision not to defend its outer territories, this approach allowed Moscow to achieve its early objectives virtually cost-free—a hard lesson that prompted Kiev to switch tactics and transfer forces eastward.

These difficulties indicate that the sine qua non of a successful response to an offensive strategy based on limited war is the fielding of effective local forces capable of withstanding the initial attack. There is no alternative to local defense organized by the targeted country. Of course, it is unlikely that a country much weaker than the attacking power, as in the case of Ukraine or any other neighboring country to Russia, can defend itself alone. Local defenses only serve as a complement to—not a replacement for—extended deterrence. Without local defensive capabilities, extended deterrence is fragile, in particular in a limited offensive war; without an extended deterrent, local defense by small states facing more powerful neighbors is sacrificial.

Shifting the strategic emphasis to local defense achieves three things. First, it increases the costs of military aggression: the more difficult it is for the revisionist state to achieve the political objective sought by the limited-war format, the more force the aggressor will have to employ and the higher the risk of a stronger response by external forces. This defeats the very purpose of limited war—low-cost, low-risk revision—from the outset. The role of local defense is to force the aggressor to escalate the level of violence, which adds both military and political costs.

Second, in the event that the aggressor does attack, an effective local defense buys time for the target state, increasing the likelihood that external reinforcements will arrive before the offensive has succeeded. In a limited-war scenario, space cannot be traded for time, but time can be bought by local defensive actions. The longer it takes for the aggressor to achieve its limited territorial objectives, the greater the opportunity for external military aid to buttress the targeted country.

Third, local defensive forces permit the conflict to remain limited, an outcome that is in the interest of all parties. As William Kaufmann wrote in 1956, “To the extent, therefore, that a conflict starts with local forces clashing over local issues, to that extent will the chances of limiting it be improved.” This, paradoxically, increases the likelihood of external support for the targeted party. The security patron of a targeted small country has no interest in, and very little ability to generate domestic support for, a large-scale conflict in defense of a distant ally. If the extended deterrent is predicated on a massive military response, it is less credible in the event of a limited attack.