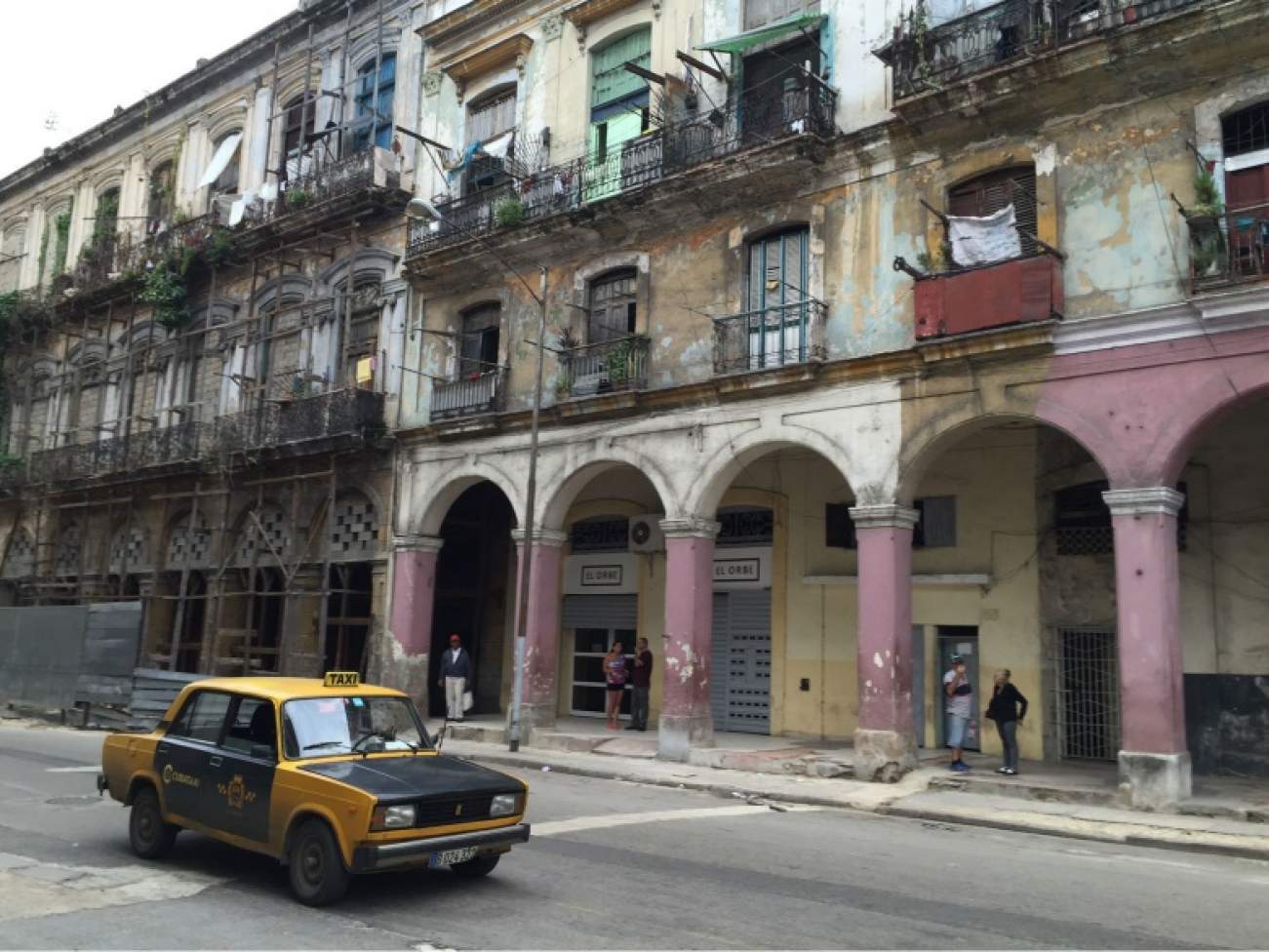 As President Obama prepares for his historic trip to Cuba, I offer some impressions from my own visit, just completed. During a ten-day trip to four Cuban cities, I found a country impatient for change and anxious for good relations with the United States—a country that has been mismanaged to a condition far below its potential by a government that is way out of its depth, but also one that deserves a better neighbor than the United States has been in the past.

Visit Cuba today, and your first surprise will be the warmth of your reception. Female immigration officers in eccentric uniforms—short skirts and black fishnet stockings—conspiratorially ask if you would prefer them not to stamp your passport; they have heard that coming here might cause you trouble when you return home. Waiters, taxi drivers, ordinary people of all sorts, but government officials too: everyone conveys their relief that the long freeze finally seems to be ending, and their concern that the U.S. election might reverse things (neither Cruz nor Rubio has much of a fan club here).

Once in the country, it won’t take you long to understand why everybody is so ready for change. Cuba is Exhibit A for what happens when a country is hit by the unfortunate double whammy of Communism and an embargo. In this fertile country with plenty of rainfall, you will have to search long and hard to find any fruits or vegetables. The shelves in supermarkets and stores are yawningly empty, and in Soviet fashion, the few items they do have are kept behind counters presided over by staff who must hand you that bar of soap or that can of tomato paste. Life has been about to get better, thanks to the government’s newest and greatest Five-Year Plan, for several decades now, and the citizenry is heartily sick of these consecutive broken promises. It doesn’t take a political scientist or an economist to observe that whatever they’ve been up to here, it’s not working.

I take that back: some things are working. There are no homeless people sleeping on the streets, no beggars, no street children running after you to ask for coins or to try and sell you something. There’s no official minder stationed in the hallway of the hotel to keep an eye on the comings and goings of foreigners, as there used to be in the old Soviet Union. Tourists roam free. Dutch pensioners swept into an impromptu dance by their bus driver, cheerful young Canadians circling the roundabouts in rented old-timers, clusters of expensively dressed East Coast museum curators busily marching about on various cultural missions: everyone can go where they please and talk to whomever they want. This is not Iran, where you must have a “guide” and there’s always a chance you might end up in prison. And it’s certainly not North Korea, where the same is true in spades.

And while there may not be a free press or democracy, and at least one human rights investigation about a suspected political assassination is ongoing, there is little evidence that average Cubans are cowed by their government. Instead, you will be struck by their irreverence, from the bartender who gleefully shows you the screensaver on his phone, featuring Raul Castro Photoshopped into a bikini, to the young father who traces little crazy circles near his forehead as he flourishes his new baby’s ration card—which includes an allotment of coffee and tobacco.

You may also be struck by what, for lack of a better term, I will call solidarity. You will notice it in offices and workplaces, which are marked by hugging, mutual praise and coworkers playing with babies in a break room while the mother teaches a class. On the freeways, hitchhiking is prevalent and, as everyone insists, perfectly safe. This spirit extends even to the street dogs, who wear little ID tags giving them a name, listing their neighborhood and spaying date, and concluding with an exhortation. “My name is Aparicio. I live near Orfebreria Museum. No me maltrates”—don’t mistreat me.

Here is my bottom line: Communist Cuba has failed, but not without achieving a few notable things along the way. It did raise almost the entirety of a population formerly mired in poverty to a standard that, while low, is considerably higher than in most third-world countries, and it should hold on to some of the social programs that made that possible. When it had its back to the wall, after the Soviet Union collapsed and there was nothing and no one left to buffer Cuba from the embargo, they somehow managed to keep their heads above the water. During that period the country engaged in several somewhat desperate economic experiments, which also largely failed, but included valuable and successful elements worth keeping, such as organic farming and homeopathic medicine.

Today, the country has unquestionably run out of steam and out of time. The welfare programs and social services with which the government bought itself the forbearance if not exactly the love of its people, will imminently run out of funds. The excellent doctors and medical professionals of whom it was justly proud, even renting them out to other countries to generate income, are abandoning the public free clinics to instead earn multiples of their salary as drivers and translators for the tourists. The Wi-Fi zones, set up in public parks to appease the public demand for connectivity, are packed with Cubans chatting away to friends and relatives in the United States, or surfing the web, learning all the facts and news and opinions that cannot be found in the boring and bland state-run press.

And everyone is oh-so-ready for capitalism. I have rarely met a population more ready. In the smaller towns of Cienfuegos and Trinidad, families are busily renting out private rooms to tourists and building flimsy extensions onto their rooftops to create even more such rooms. Airbnb is flourishing, despite the obstacle of poor internet connectivity. Not only do government-licensed taxi drivers know all about Uber, they can’t wait for it to arrive so that they can jump ship. Improvised souvenir stands abound. Elderly Cubans stand on the roadside offering honey from their private beehives, packaged in reused water bottles with a layer of dead bees still floating on the top. Paladares, private “restaurants” operating out of people’s homes and limited by law to a maximum of ten tables, are everywhere. Every Cuban you meet has five ideas for the small business he or she intends to launch. Cuba and capitalism could be a match made in heaven—an entirely new concoction of private enterprise with a spoonful of socialism to take the edge off, like the sugar in their other great invention, the mojito.

The tattered billboards that still line the roadside with inspiring socialist messages, the giant silhouettes of Fidel and Che in neon on the sides of buildings or in stencils on the backs of buses, feel as quaint as the old-time cars that populate the highways: relics of the past, soon to be replaced with something more contemporary.

But what exactly will that be, and where does America fit into the picture? Stroll through Old Havana today, with its modern art installations perking up the colonial squares, its beautiful refurbished churches and boutique hotels and bars featuring the framed signature of Hemingway, and the revolution feels like just another quaint relic of the 1950s. But visit the Museum of the Revolution in Havana, or the Bay of Pigs Museum in Girón, and you will find yourself confronted with a less amiable narrative. Here, too, the first impression is of the time-capsule sort, as you take note of the dated political language and the chest-thumping Communism.

“We can call people, if it is a matter of fight, to the six hundred thousand of Cubans whom are unemployed (. . .); to the five hundred thousand of workers whom live in despicable hut (. . .). That’s the people, the one that suffers all the unfortunes, and therefore, they are able to fight braverly!”

But once you get past the rhetoric and focus on the historical facts, perhaps supplementing them with your own reading and research after you’ve left the museum, you are likely to conclude that the basic message here is not untrue.

Batista was inarguably a dictator who stayed in power by military force, not by election, and was enabled therein by the United States. He was repressive to his population, in the pocket of foreign companies and in bed with the worst elements of the American underworld. His removal was a good thing, and the revolution indeed fought “braverly” for greater equality and a better life for the citizenry. Did they go too far? Perhaps—though not by any measure of what a revolution generally looks like. No one enjoys having their property nationalized, but on the other hand, in the 1950s, according to a 2008 USDA report, U.S. interests controlled more than 70 percent of Cuba’s arable land. That’s not a situation any self-respecting country can be expected to tolerate.

Then there’s the Bay of Pigs. Really, we thought it was a good idea to arm 1,400 disgruntled Cuban exiles, put them in boats and launch them towards Cuba—just on their word that the Cuban population would promptly rise up and overthrow Castro? (Sound familiar? Americans seem never to learn that expatriates have their own agendas and are not our most accurate source of political information.)

This bright little idea cost almost two hundred young Cubans their lives, as they rushed to the beaches to defend their country. The stark white stone markers that denote the place where each one fell, and that remain scattered around the bay and the surrounding landscape, make a far more moving statement than the antiquated agitprop in the adjacent museum.

We’ve made a lot of mistakes in Cuba in the past. And unfortunately it’s not difficult to imagine a scenario in which we will now commence to make new mistakes, to the detriment of Cuba, and with the result of alienating a country that at this moment wants few things more intensely than good relations with us.

The less happy scenarios aren’t that farfetched, sadly. If change is injudicious—too fast, too uneven, too repetitive of past mistakes, too insensitive to local needs and values—this can end badly. I personally witnessed the probably very last thing I was expecting to see in Havana: a troop of Muslim fundamentalists attempting to proselytize on the street to a baffled young group of locals. And recently, someone has built a large, at the moment cavernously empty, mosque in downtown Havana, a puzzling presence in a country exclusively populated by Catholics and socialist atheists.

For now, all eyes and all hopes are on the United States, awaiting renewed ferry traffic to Miami, a fast internet, foreign currency, opportunities for business, additional political parties and real newspapers with actual news. But treat Cuba once more like the exploitable nobody next door, and Americans could end up with a hostile beachhead right on their front step.

Oh, and that Museum of the Revolution? Right next to the enormous Cuban flag in the entrance hallway you will also find a marble bust of Abraham Lincoln. Remember, everyone? We had a revolution too, and a rending civil war against social injustice, and when we’re not supporting “our son of a bitch” we favor the democratically elected, and we, too, fight for equality. Braverly.