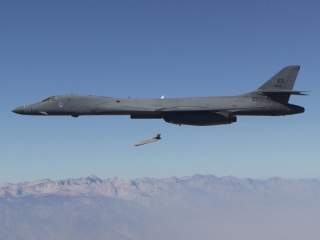 In recent months, opponents of the long range standoff cruise missile (LRSO) have taken to the pages of the nation’s newspapers to press for cancellation of the program. Unfortunately, article after article has offered a number of assumptions, half-truths, and inaccurate information.

In challenging the utility and wisdom of replacing the U.S. Air Force’s AGM-86 nuclear air launched cruise missile (ALCM) with the long range standoff cruise missile, which is expected to be stealthy, able to evade advanced integrated air defenses (IADS), and far more accurate, detractors repeats a number of arguments that lack understanding of adversary capability and how the United States plans to employ nuclear weapons in a conflict—which is central to convincing an adversary (Russia or China) that a nuclear conflict should never be fought.

Detractors make four basic arguments. First, they argue LRSO is a redundant capability that the B-21 stealth bomber and its B-61 gravity bombs can perform. Second, they suggest LRSO does not enhance warfighting capability. Third, they assert fielding LRSO will destabilize the strategic balance. Fourth, they suggest the cost of acquiring LRSO is “indefensible.”

Each of these arguments is deeply flawed and deserves a response if for no other reason than to provide an operational perspective that explains why LRSO actually matters to warfighters and why it contributes to a stable deterrent.

Opponents of a replacement for the 1970s-era air launched nuclear cruise missile (AGM-86) often argue that the LRSO is an unneeded capability because the B-2 and B-21 bombers will carry the B-61 mod 12 nuclear gravity bomb. Thus, opponents argue that nuclear cruise missiles are redundant. The flaw in this argument is that it is largely an argument focused on the politics of nuclear weapons, not any actual operational employment of the weapons. Let me explain.

There is a widespread misconception that the probability of arrival of a nuclear weapon to its designated target is a one-hundred percent chance of arrival. The reality is much different. Regardless of the specific delivery vehicle, the probability of any nuclear weapon arriving at its designating target—not to mention detonating and destroying the target—is calculated for each weapon and exists within a range below one hundred percent. In other words, the notion that any nuclear delivery system is “redundant” is a foolish notion that fails to account for the fact that getting a warhead to its designated target is far harder than detractors state.

Opponents of LRSO assume that Clausewitz’s “fog and friction of war” do not apply to the nuclear realm. Because of an assumed perfection of “delivering weapons on targets,” detractors suggest that very few nuclear weapons with minimal delivery types are sufficient to maintain stable deterrence. They assume away all past experience in war warfare.

For example, a Government Accountability Office (GAO) report notes that the United States expended an estimated twenty-five thousand rounds in Iraq and Afghanistan for every insurgent killed during Operation Enduring Freedom and Operation Iraqi Freedom. The GAO also notes that American forces expended more than fifty thousand rounds for every enemy killed during the Vietnam Conflict. Yet for some reason opponents of LRSO believe that only one bullet fired from one gun is required—one shot, one kill.

They also presume that the B-2 and B-21 are somehow guaranteed to fly through heavily-defended enemy airspace unmolested, drop a B-61—perfectly destroying target. Sadly, this view of air warfare does not fit reality. Stealth aircraft are neither invisible nor invincible. Both the B-2 and B-21 achieve survivability by producing a reduced radar cross section. This is achieved by directing radar returns in predictable directions—away from the receiver. This predictability allows for mission planning against known threat (IADS) locations. Against mobile threats whose location is unknown, radar returns could give away the location of a stealth aircraft. This increases the risk of detection by mobile surface to air systems. To overcome the limitations present in stealth aircraft, American systems employ tactics and techniques that maximize stealth’s attributes.

In short, some well-defended targets are unavailable to stealth aircraft because they have radar signatures that are too large. This means a stealthy cruise missile, which is only a fraction of the size of a stealth bomber, has a much greater probability of arrival at the designated target. Given that there are targets which neither a submarine launched (SLBM) nor intercontinental ballistic missile (ICBM) can hit—because either their reentry angle will not allow it or they will overfly a hostile country that is not the target—the air leg of the nuclear triad is critical.

To rely solely on the B-61 open the nation to creating a single point of failure, which decreases the president’s options and reduces the credibility of the American deterrent in the mind of an adversary—where it matters most.

Former Secretary of Defense William Perry and Andy Weber suggest that cruise missiles are destabilizing weapons. The challenge with this assertion is that it lacks empirical evidence to support the argument. The simple fact is there is no historical evidence to suggest that nuclear cruise missiles are more destabilizing than other nuclear weapons.

In fact, the United States currently has the fewest types of nuclear weapons and delivery systems in the arsenal’s history. Given the small size of the arsenal and the declining types of delivery systems, the United States is more susceptible to strategic surprise (i.e. development of game changing technology) than it has been at any point since the development of nuclear weapons. There is also Russia’s recent development of the KH-102 nuclear cruise missile, which can be launch undetected from within Russian airspace and hit targets in the United States. For Russia, these new cruise missiles are viewed as central to the credibility of the country’s deterrent—not a destabilizing weapon. Both countries understand that cruise missiles have the ability to defeat advanced IADS.

During the 1950s and 1960s the Army’s nuclear force was greater in variety of nuclear weapons and delivery systems than the United States current force. Yet, during that period, the Soviet-American nuclear standoff remained stable. Thus, Perry and Weber’s argument that the LRSO is destabilizing because an adversary will not know whether a conventional or nuclear variant is headed toward them is incorrect.

Because the B-2 and B-52 are capable of carrying nuclear weapons internally, as will the B-21, an adversary does not know what type of weapon is hidden in the bomb bay. This has been a true since the two bombers became operational and yet it has not been considered destabilizing. Russian bombers have the same capability.

Nuclear cruise missiles provide a number of advantages that opponents overlook. First, the reality of employing cruise missiles is that they require far less logistical and planning support and can fly profiles against difficult targets that no bomber can fly. With standoff weapons the planner’s main concern once the ALCM is launched is getting the weapon to the target. If a bomber has to deploy its weapons inside the target country, planning becomes significantly more complicated. This is because a great deal of additional planning is required to ensure the bomber has the greatest probability of reaching the target and then returning from the mission.

While the lives of American bomber crews have never received consideration from opponents of the LRSO, they do matter to the families of the Airmen flying these high-risk missions. Launching LRSO outside the enemy’s missile and fighter engagement zone enables the cruise missile to operate in degraded environments that a bomber, required to penetrate enemy airspace, would find challenging if not impossible.

LRSO will save the lives of American airmen in an additional way. Bombers do not go to war alone. Rather, they often require fighter escorts, aircraft to suppress enemy air defenses (SEAD) and support aircraft that specialize in jamming and electronic attack. These aircraft and aircrews are also placed at greater risk.

Should a cruise missile be lost to enemy IADS, the loss is considerably less than if American aircrews are lost over enemy territory. It makes neither financial sense nor does it properly value the lives of airmen to forgo the development of LRSO.

Second, bombers carrying ALCMs provide the president a level of flexibility that bombers carrying gravity bombs do not have. It starts with the posture of the nuclear alert force. B-52s can generate with cruise missiles loaded internally, externally or both and sit alert. This is a powerful way to signal to the adversary that the United States is at a higher state of readiness.

Additionally where a bomber carrying the B-61 gravity bomb would likely strike a single target, that same bomber carrying the AGM-86 or the new LRSO would be capable of striking more than a dozen targets in an orchestrated manner—nearly simultaneously. One other aspect of presidential flexibility is the ability to increase negotiating time while the bomber is airborne. For example, if a bomber were only capable of delivering the B-61 twelve gravity bomb, once the bomber penetrates the enemy’s airspace they are committed to the attack and no longer recallable, whereas if they have a standoff capability they can loiter outside enemy airspace and delay launch to allow additional negotiations.