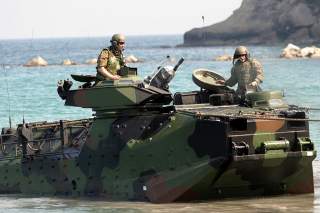 Philippine president Rodrigo Duterte continues to annoy and alarm U.S. officials and members of the American foreign-policy establishment. His repudiation of the alliance with the United States, combined with a strategic rapprochement with China, has resulted in a lucrative payoff for his regime. Beijing is providing the Philippines with an aid package worth $24 billion. The implicit quid pro quo is that Manila will back away from its territorial claims in the South China Sea—a move that would remove one especially pesky challenger to Beijing’s own ambitious claims.

Duterte has subsequently tried to walk back some of his dramatic moves. He now insists that his much-touted “separation” from the United States was only from U.S. foreign policy, not a severance of the entire relationship. Apparently he would still like his country to enjoy the protection of the U.S. military alliance in the event of trouble and to preserve a vital trading relationship with America. Duterte also expressed his hope that Filipino fishing crews might again be able to occupy a disputed shoal in the South China Sea, although one should be cautious about placing a large wager on Chinese receptivity to that suggestion.

The reaction in the U.S. foreign-policy community to Duterte’s behavior has been a mixture of anger and alarm. Council on Foreign Relations senior fellow Max Boot expresses an extreme version of the latter emotion, terming Duterte’s tilt to China as nothing short of a “disaster” for the United States. That kind of hysteria is, to put it mildly, an overreaction. Yet the conventional wisdom is scarcely better. American officials and most outside analysts seem to believe that, as annoying as Duterte’s flirtation with China (as well as his bloody domestic conduct) has been, the United States needs to grin and bear it. Secretary of Defense Ashton Carter, for example, steadfastly confirms that the alliance with Manila is “ironclad.” Cutting the Philippines loose would supposedly undermine U.S. credibility throughout East Asia, perhaps fatally.

That assumption is highly questionable. The Philippines is a minor ally, or more accurately, a U.S. security dependent. The importance of that relationship is certainly not on a par with that of a major ally, such as Japan. There is also considerable scholarship that casts doubt on the entire “general credibility” thesis. Rather, the credibility of each specific commitment depends on two key factors. First, how important is the issue at stake to the guarantor power and to the challenging power? Where there is a major imbalance in the intensity of interests, a commitment made by the power with a lesser interest lacks credibility. Where there is a parity of interests or the guarantor power has a greater interest, a commitment has the potential for high credibility. The other key factor is the balance of military forces, both in terms of quantity and quality.

The Philippines constitutes a relatively minor consideration by both measures. Yes, the islands provide a convenient staging area for U.S. air and naval forces to operate in the South China Sea and elsewhere in the Western Pacific. But they are not essential for that purpose. After all, the U.S. military was excluded from the Philippines for two decades beginning in the early 1990s, and that development did not seem catastrophic to the U.S. Navy. Without any involvement by the Philippines, the United States has a major edge on Chinese forces, and although that gap is narrowing, the advantage is likely to persist yet for a decade or more.

As far as interests are concerned, America’s concerns in the South China Sea have little to do with the Philippines and its territorial claims. Washington’s legitimate interests are limited and direct: the preservation of freedom of navigation to ensure that the multibillion-dollar commercial traffic that passes through that body of water can continue to do so unmolested. As yet, China has not threatened freedom of navigation, but the vast extent of Beijing’s territorial claims understandably worries U.S. leaders. They do not want to see the South China Sea transformed into a Chinese lake.

But the United States can defend its narrow interests without crawling into bed with the likes of Rodrigo Duterte. If he believes that he has made a better arrangement with the Chinese, we should wish him good luck. However, instead of letting him dictate the terms and pace of the separation, U.S. leaders should do so. And our terms should be an amicable, but final, divorce, including the termination of the defense alliance. That move could become a good model for pruning Washington’s overgrown military commitments around the world.