Lost at Sea: Britain Paddles Toward an Unknown Future 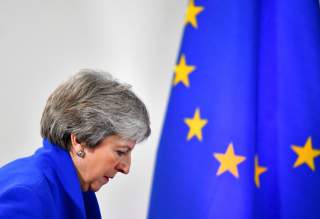 More than most any other economy in the world, finance in the UK holds an important role. It amounts to fully 6.5 percent of the economy, almost twice what it is in the rest of Europe and second only to the 8.0 percent finance amounts to in the U.S. economy. As an EU member, British establishments dominated finance throughout the union. London was the go-to place for large or complex financial needs from the Mediterranean in the south to the North Sea and from the Russian border in the east to the Galway Bay in Ireland. Her Majesty’s government had longed to protect this position with a quick agreement that would allow the City of London the privileges it held when the UK was still a member. For the EU, however, has a major sticking point. Though Brussels has good reason to keep British finance available to its business, it could not allow Britain what would amount to primacy in finance without a measure of control. A common market would have given that control, but since that answer is obnoxious to significant British interests, a deal on finance would require a further compromise within a customs union.

Such a compromise would require something of a muddle to bridge the gap between demands for British sovereignty and EU control. The sides might accomplish that with Parliament the official rulemaker but nonetheless pledged (unofficially) to follow EU guidance. Such a concession would hardly constrain London, since already international rules set the standard for financial governance across the globe.

It may be that even such a muddle will prove unnecessary, since an alternative fudge already seems to be developing. The delays in making a deal have already worried British financial firms about their ultimate position. To protect themselves, several have already relocated part of their operations to Frankfurt and elsewhere on the continent. Jobs have gone, but it seems that the “branches” on the continent, however legally constituted, still retain economic ties to their parents in London, which continue to benefit from the business. The EU hardly minds because continental business continues to benefit from the remarkable connections and expertise that exists in London. By the time any prospective rulemaking fudge goes into effect, this parallel development may make the informal guidance an entirely moot matter.

Then there is the Irish question, something that has bedeviled English politics in one form or another for the last one thousand years. In this case, the problem arises because the Irish Republic is an EU member. Brexit, except in a customs union arrangement, would require customs checks at all points of entry. Even in a customs union, exit would require immigration checks. That would present a major problem at the border between the Republic and the British province of Northern Ireland. Dublin has expressed discomfort if only because it retains a vague national aim to unite the island someday. More problematic is the so-called Good Friday Agreement that ended Irish terrorism in Ireland and elsewhere. It calls for an open border between the north and the south. With a British departure, troublesome immigration controls at the border would seem to be inescapable.

Negotiators have floated some comprises, but none have sufficed. The EU has said that the border could remain open if London would agree to impose EU rules on all products in Northern Ireland. Elements in England have rejected this “solution” because it would violate British sovereignty. It would impose a two-tiered regulatory and customs situation on Britain, in which some of its territory would follow one set of rules written in Brussels, while another part would follow a different set of rules written in London. Such a “solution” would have the additional defect of leaving the immigration question unanswered. It would, in other words, threaten the reason the exit camp wants to exit. The “solution” also worries Northern Irish politicians, who would see it as the thin end of wedge to move the province from a British to an Irish Republic affiliation.

Though these considerations would seem to present an impossible impediment to a clear agreement, this Irish question, consistent with history, might yield to a muddle. Even if a customs union were to fail, the sides could dispense with checks at the border by moving such checks on cross-border goods and services to the point of origin in both the Irish Republic and the UK. For the movement of people, the parties might model things along the lines of the U.S.-Canadian arrangements that predated the first NAFTA. In that long period of time Canadian and U.S. citizens crossed the border informally. Officially, border agents could ask to see a passport, and that rule was enforced for citizens of other countries. But mostly, immigration officials would simply ask if those crossing were American or Canadian citizens and, except on those rare occasions when a border agent had doubts, allow people through without any formal checks. It would be difficult to write such an arrangement into law much less a treaty, but it might serve.

Meanwhile, the Brexit saga will drag on. Such muddles can only emerge after considerations of all the clear options have failed and done so repeatedly. May’s successor, however talented or not, will still face these same intractable problems. He or she would even have difficult time calling another election, as some have suggested in the hopes of getting a less divided Parliament. Britain’s fixed-election legislation stipulates that such a call must receive two-thirds majority in Parliament, which is hardly likely to occur while the existing Tory-Northern Irish coalition remains reasonably confident that it would lose power in such a vote. For the same reason, it is not likely that Parliament could force an election with a vote of no confidence in the government. Since all the divisions that existed during the 2016 referendum remain, it is far from apparent that a new Parliament would manage any better than the present one. Meanwhile, whoever emerges in leadership in the EU, and however impatient they may become with Britain, will still face economic imperatives that argue against precipitating a “hard exit.”

These suggestions about the ultimate outcome do not, of course, exhaust all the possibilities. They may be most probable, but with so many moving parts, all conclusions must be viewed as tentative at best. It is then something of a presumption to forecast at all. Still, it is also only human to try to see the path ahead, and it is in that spirit that this analysis has proceeded. There is, however, one definite thing to say about the Brexit matter: It will churn on for a good deal longer, if not quite three hundred years.

Ezrati is a contributing editor at The National Interest, an affiliate of the Center for the Study of Human Capital at the University at Buffalo (SUNY), and chief economist for Vested, the New York based communications firm. His latest book is Thirty Tomorrows: The Next Three Decades of Globalization, Demographics, and How We Will Live.