Lowdown: What Russian Citizens Really Think of Putin and Why 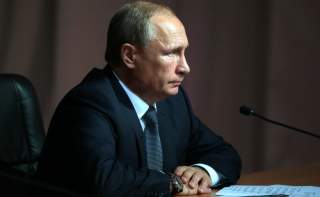 For an outsider, understanding contemporary Russian reality in any season is never easy—one senses, not even for the Russians themselves. They certainly disagree over many of its aspects. I’m in Moscow for much of this fall teaching graduate students at MGIMO and the Fletcher School of Law and Diplomacy in a video-connected classroom, as I was last fall—soaking up as much as I can, reading, watching, walking, meeting people.

Things feel different from last fall. The leadership, politicians, businessmen, analysts and the public—to the extent that it rises above its indifference to the political world—appear to have accepted the desiccated, friction-laden, arms-length U.S.-Russian relationship as the “new normal.” And it’s with something of a shrug. But then that also seems to be happening in the United States.

Television, unlike last fall, is not saturated from morning to night with lurid coverage of the violence in Donbas, although the political fights and protests in Kyiv get plenty of attention. Ukraine has been replaced by the migration crisis in Europe, and now competes with the menace of ISIS. Most Russians who follow current events think Ukraine is sinking into a “frozen conflict”—a ragged ceasefire appears to be holding, and neither Moscow nor the Western countries have any desire to see it collapse. The public, however, as measured in polls in mid-August remain more skeptical. Seventy percent believed renewed military conflict was likely or very likely; only 21 percent thought not.

As for ideas of what to do next or a larger Russian strategic agenda in Ukraine, one well-connected Duma deputy told me they don’t exist: Russia is simply sitting back and watching events unfold in Kyiv. It will focus on helping to create and defend functioning social, economic and military institutions in the shattered portions of Donetsk and Lugansk controlled by the separatists. But few expect the provisions in the Minsk II agreement aiming at a political settlement to work, nor do they see Moscow straining to make them work. Maybe Moscow will be minimally unhelpful in economic relations with Kyiv, if Kyiv helps ease Crimea’s electricity and water-supply problems. As for public attitudes toward Ukraine, the ratio between “very favorable” and “very bad” has flipped 180 degrees since January 2014 (then 66 percent were “very favorable;” in May 2015, the latest figures, 26 percent; “very unfavorable,” in January 2014l 26 percent; May 2015, 59 percent).

Scenes of thousands of desperate refugees besieging Europe and the turmoil in the Middle East, as one senior scholar said to me, provide further support for the Putin regime. (An MGIMO student asked his Fletcher counterparts: “Why do you call it the Putin regime? Do you call it the Obama regime?” They then stressed the widespread public support for the government.) Watching all this distress, the average Russian credits Putin with sparing the country the same, and for most Russians, having been through the 1990s, stability ranks very high.  Added to the deepening and spreading sense of nationalism (the “krim nash” [“Crimea is ours”] tee-shirts are less on display, but the sentiment persists and the 85 percent support for the annexation has scarcely budged since March 2014), together with the strong tendency to blame Russian woes on the United States, this sense of Putin’s leadership as the best guarantee of continued stability helps to explain Putin’s popularity. Many Russians will tell you that it is not really at 83 percent, as the polls show, but almost none doubts that it is genuinely high. The fly in the ointment is that no other politician’s ratings are half as high, nor is the government’s, nor are those of government policies, although approval of the direction in which the country is headed last month was 55 percent, down nine points from June, but 14 points higher than when Putin returned to the presidency in 2012. (And it might be pointed out, considerably higher than similar polls in the United States and most European countries.)

Thus, if in some U.S. quarters, people look at $40-50 barrel oil, a ruble-dollar ratio of 70:1, negative growth of 4 percent this year, and slow or no growth for at least three more years, with attendant inflation and the erosion of Russians’ disposable income, and assume discontent must already be building below the surface, the evidence is difficult to come by. True, some very smart Russian analysts have assured me that something has to give. As one put it, sooner rather later either the lid will blow off with unpredictable consequences or Putin and his colleagues will make a U-turn, and, at least at the level of atmospherics, try to release pressure from Russia-Western tensions. But they are in a minority, and a far larger number, both partisans and critics of those in power, either smugly or in resignation, expect things to stagger on pretty much as they are.

Russia, of course, has a history of appearing stable until it isn’t—of looking stolidly immobile, until bunt, that strong Russian word for explosive rebellion, erupts. Maybe somewhere deep in Russia’s fraught existence that potential is slowly congealing. Dmitri Trenin, one of Russia’s most thoughtful observers, has written that, if Russia does not surmount the current crisis (of the Russian economy) within a crisis (of Russia-West relations), not only the regime, but the country are in peril.

To the outsider, however, the signs are not there yet. This summer, when asked whether mass protests were likely in their city or region over the “declining quality of life and in defense of civil rights,” 76 percent of Russians said “no,” 18 percent said “entirely possible,” 10 points lower than in February 2014, and, if they did take place, 87 percent said they wouldn’t join them. When in August asked whether western sanctions were a problem for them, 27 percent said, “yes,” and 67 percent, “no.” Sixty-eight percent supported ignoring Western demands, and 20 percent favored concessions to ease sanctions. As for the Russian government’s counter sanctions on Western food imports, 67 percent supported them, 21 percent opposed them, and 58 percent thought they had worked in gaining Western “respect” for Russia.

A five-minute conversation with most Russian citizens will reveal that they still feel totally defenseless in the face of pressures from big and small bosses, utility companies, fire and tax inspectors, courts, the police, military draft boards, and even random street patrols by Cossacks. At the same time, the post-Soviet Russian citizen seems satisfied by (or pretends to be satisfied by) a feeling of belonging to something big and faceless, a crowd that shares pride in itself and its leader.

The negative side of this with direct bearing on relations with the United States is how Russians answer the question, “Is the United States using Russia’s current difficulties to turn it into a second-rate power and a mere supplier of raw materials for the West?” As of June 2015, 86 percent of respondents agreed, 44 percent of them “entirely,” and only 7 percent disagreed. Lest the reader think these results are simply a function of the fog of anti-Americanism dominating contemporary Russian discourse, in 1998, during the Yeltsin period, 75 percent agreed, and 17 percent disagreed. When recently asked whether Russia’s relations with the West can be “genuinely friendly” or will “they always be rooted in mistrust,” 24 percent selected the sunny choice, 62 percent the other.

The average Russian bus driver, let alone the average villager tending her garden, of course, has even less influence over national politics and the course of Russian foreign policy than the average Boston Red Sox fan or a South Dakota farmer has over U.S. politics and foreign policy. But, if from this obvious fact the U.S. political establishment concludes, as the New York Times columnist, David Brooks, did earlier this year, that the Russian challenge is essentially “Putin, a thug sitting atop a failing regime”—a saltier way of expressing what appears to be a widespread impression in Washington and the national media—the real challenge will go unrecognized. That is so, because the surveys I have been quoting included not just bus drivers and villagers, but a fair portion of the middle-class business community, political elite and no doubt leadership at the top. They may have somewhat more sophisticated and polished responses, but their sentiments break down in basically the same way.

[All of the data I cited are from surveys conducted by the Levada Center, Russia’s most professional polling organization.]