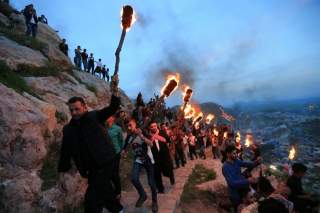 The Kurdistan Regional Government (KRG) of Iraq, has autonomously governed a corridor in the North of Iraq for some time now. Following the rise of the Islamic State, Peshmerga forces (the military arm of the KRG) were instrumental in halting the spread of the Islamic Caliphate. Baghdad’s Iraqi National Army, trained and supplied by the United States, fled from ISIS advances, losing swaths of lands and allowing droves of military equipment to fall into the hands of the Islamic State. In contrast, Peshmerga forces gained lands and, as I witnessed in person on a military base between Erbil and Mosul last year, they were able to capture equipment from the Islamic State—most notably makeshift armored suicide trucks.

In addition to consolidating their hold on the territory of the Kurdistan Region of Iraq, they also claimed by right of conquest two oil fields in July 2016, the Bai Hassan field and the Kirkuk oil field, the seizing of which led to a further deterioration of relations between Erbil and Baghdad. These areas had previously been defended by Iraqi forces, which retreated in the face of the advancing Islamic State. The fields remained under control of the KRG for years, up until the KRG held an independence referendum, which passed overwhelmingly, thereby granting further legitimacy to KRG officials’ calls for independence. Less than a month later, Iraqi forces, supported by Shi’ite militias backed by Iran launched an offensive to retake the oil fields at Kirkuk. In attempt to avoid any blood spilled between Erbil and Baghdad, and under pressure from the United States, Kurdish forces retreated, allowing Baghdad to reclaim the oil fields once held by the Islamic State. It is also important to note that the oil fields were not included in the KRG’s stated territory at the time of the independence referendum, but they could have provided an extremely value revenue stream for the KRG.

Since retaking the oil fields in October of last year, Baghdad’s Ministry of Oil has finalized an agreement with British Petroleum in the hopes of increasing production capacity. Instead of utilizing the pipeline that used to send crude from Kirkuk to Turkey through the Kurdistan region, this plan opted for trucking the oil from Iraq through Iran. Many people have suggested that the KRG’s efforts to take the oil fields deprived Islamic State militants profits from the sale of oil—one of their primary financing efforts during their reign of terror.

To further complicate the international situation, Dmitry Zhdannikov recently reported that while Secretary of State Rex Tillerson was begging the KRG to halt its calls for independence, Igor Sechin, head of Rosneft the Russian state owned oil major, was penning a deal with KRG officials. Zhdannikov further reported that Sechin delivered a letter to the oil ministry in Baghdad which criticized Baghdad’s, “lack of constructive position and interest,” and in lieu of cooperating with Baghdad, Rosneft would prefer to strengthen ties with the KRG who held “a higher interest to expand strategic cooperation.” During the Kurdish independence crisis last year, while the United States and European Union sought to halt the Kurds and reassure Baghdad, Russian economic interests sought to strengthen ties with the KRG at the expense of Baghdad.

But make no mistake, Igor Sechin is not just the CEO of a major player in the oil industry. He is also the former deputy prime minister of the Russian Federation, a former intelligence officer of the KGB, and close confidant of Russian president Vladmir Putin. A Stratfor report once described him as commanding the loyalty of the FSB and representing “the FSB’s hand in the Russian energy sector.” Sechin has been referred to as the most powerful man in Russia, second only to Putin, and has regularly featured on U.S. sanctions lists for his role in the Crimean annexation. A business associate of former Secretary of State Rex Tillerson during his time at ExxonMobil, Sechin’s work at Rosneft has made him the point-person for wielding Russia’s sizeable Energy hand throughout the world. Rosneft is undoubtedly a tool of Russian foreign policy and Sechin forms the tip of that spear. For example, in Hungary, through Sechin’s hand, Surgutneftegas, a Russian state-owned enterprise, acquired a large share of Mol, Hungary’s largest oil company. This episode was not just a normal development in the international energy market; it was an example of Russian power politics played through Sechin. Leaked U.S. cables published in a Newsweek article stated that during the acquisition, Igor Sechin threatened the CEO of Mol by saying that he was, “not only fighting with Surgutneftegas, but with the Russian state, which has tools that companies do not have.” The implicit threat aside, what Sechin’s behavior displays is the dynamic role he plays on behalf of the Kremlin. He may formally be a representative of the Russian petro-giant, but informally he is Russia’s second foreign minister acting on behalf of Kremlin interests.

With the rise of a second Cold War, the fear is that many of the strategies and methods promulgated during the last global bipolar conflict are returning in the digital age—an age of asymmetric warfare and aggressive information operations. Complex issues and international crises can be co-opted and retooled to fit the larger games of power play between the competing poles. Once such complex issue that could become co-opted is the quest for Kurdish independence, which involves complex issues. The growing interest Russia has shown with building bridges between Moscow and Erbil could exacerbate that issue. It is clear that Sechin does not only act on behalf of the board of Rosneft, but on the interests of the Kremlin. Increasing influence over Erbil, and the larger Kurdish issue, could become a big problem in the years to come.

The Kurdish people of Iraq, independent in all but law, have clamored continuously for full independence and statehood. This effort has been stymied by conflicting U.S. efforts to implement a plan for a territorially stable and viable Iraq. However, Kurdish calls for independence can only be met with the answer “now is not the time” for so long. At some point those dismissed efforts may not be made so peacefully. As the Kurdish issue is inherently a transnational one that impacts virtually every bordering state in the region, considering the contingents of the Kurdish diaspora residing within their territory, any escalation between Baghdad and Erbil has the potential to escalate and threaten an already unstable region. Kurdish militias backed by the U.S. are being attacked by Turkish forces in Syria while simultaneously fighting against the Assad regime. Nationalist Kurdish terrorist organizations have been a thorn in Ankara’s side from within, and an autonomous Kurdish corridor in Northern Iraq is vociferously demanding independence from an unstable government in Baghdad. The last thing, U.S. policymakers want to see is a Russia co-opting the Kurdish struggle to challenge American interests in the region. Sowing discord has become a Russian specialty in the new Cold War, and Iraq could become a viable target for those operations.

If the U.S. approach is to continually delay Erbil’s calls for independence, then the KRG may in turn seek to cut some of their ties to the United States because of “a lack of constructive interest” and could seek out partnerships with countries that show “a higher interest to expand strategic cooperation.” If the KRG abandons its reliance on Washington for a partner that encourages their aspirations for statehood, then the Syrian Civil War may not be the only conflict in the region that helps the new Cold War take form.

Michael R. G. Lyons is a DC-based researcher, who has focused on Security issues in Europe and the Middle East.

Image: Iraqi Kurdish people carry fire torches up a mountain, as they celebrate Newroz Day, a festival marking their spring and new year, in the town of Akra, Iraq March 20, 2018. REUTERS/Ari Jalal​