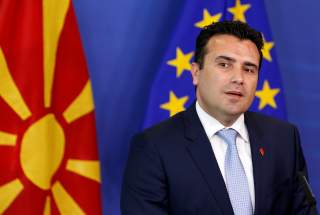 The “Interim Accord” was supposed to function as a stop-gap solution, halting the Greek blockade on its neighbor and opening diplomatic relations between the two countries, pending a permanent solution. Twenty-two years later and there is still no final agreement on the name—and the failure to close this chapter weighs heavily on the increasingly unstable Balkans. Thanks to rare political dynamics in both Athens and Skopje, there is a fleeting opportunity to resolve the name dispute. But doing so will once again take bold U.S. leadership.

Policymakers routinely scoff at the name dispute as a “ridiculous” Balkan squabble. In fact, it’s quite serious. Solely because of its complaint that Macedonia has stolen Greek heritage—the legacy of Alexander the Great—Athens continues to block Macedonia’s membership in NATO and its advancement towards the EU. The vacuum leaves the country—and the region—in limbo. Without a clear pathway to Brussels, Macedonia’s democratic development has stalled, perpetuating anxieties that the country could be divided.

The same syndrome exists in divided Bosnia-Herzegovina and Kosovo, each of which faces structural hurdles to joining NATO or the EU. Irresponsible nationalists in those countries have made strident calls for territorial division, a step that would reopen the conflicts of the 1990s. Exacerbating these trends, Russia and Turkey have begun to actively undermine Western strategy in the region. Once thought to be an inexorable process, the incorporation of Bosnia-Herzegovina, Kosovo, Serbia and Macedonia into Euro-Atlantic institutions is now open to question.

In other words, “plenty” is the answer to Shakespeare’s eternal question of “what’s in a name?” Without a solution to the name dispute, Macedonia will continue to languish in uncertainty—another open territorial question weighing on regional stability. On the other hand, resolution of the dispute will allow Macedonia to join NATO at once while jumpstarting its EU accession bid. With its identity and borders reaffirmed, talk of minority Albanian secession will cease, muting calls across the border to divide Kosovo and unify with Albania. The entire regional strategy of Western integration will regain credibility, including in Bosnia. And Moscow, which had to swallow the bitter pill of Montenegro’s recent NATO accession, will have to mourn the “loss” of another Orthodox Slav country to the West.

Though the name dispute represents relatively low-hanging fruit, success is by no means assured. A bid by President George W. Bush to resolve the matter at the 2008 NATO Summit crumbled in the face of Greek intransigence. Fortunately, the prospects for the Trump administration are much better. For the first time in decades, a Greek government has prioritized good relations with Washington. Facing daunting challenges with Germany and the IMF over debt, and with Turkey over the Agean, Prime Minister Alexis Tsipras desperately wants Washington on-side. Unlike his predecessors, the Greek prime minister is determined to clear away outstanding issues with his immediate Balkan neighbors.

Tsipras met with President Trump in October, followed the next day by an intensive working meeting with Vice President Pence, Secretary of State Tillerson and other cabinet officials. Significantly, Pence raised the name issue and the sides discussed how to get to a resolution.

As for Macedonia, thanks to concerted U.S. intervention, reformist Zoran Zaev took his place last spring as Macedonia’s elected prime minister, ending two years of political crisis. Resolving the name issue is his top priority. In sharp contrast to his predecessor, Nikola Gruevski, who repeatedly provoked Greece, Zaev has set a positive tone with his southern neighbor. Critically, neither he nor Tsipras faces elections until 2019, opening a golden window to finally negotiate a permanent name solution.

Nominally, the negotiation process is in the hands of the longtime UN negotiator Matthew Nimetz. In reality, Washington is the key player. Only Washington can concentrate minds—not just in Athens and Skopje, but in Brussels, Berlin and Paris as well. Indeed, to finally resolve the name dispute, EU and U.S. coordination will be critical. While open U.S. pressure on Skopje can help Zaev fend off domestic opposition to a deal, an overt American role in Athens will backfire, forcing Tsipras to drop the matter.

Diplomats will improve their chances of resolving the dispute if they grasp its deep origins. Tito’s Yugoslavia was an active belligerent in the bitter Greek Civil War of 1946–1949. The defeat of the Tito-backed Communists saw tens of thousands of ethnic Macedonians (“Slavs,” as the Greeks term them) flee, while a greater number remained behind a closed border in Greece. Fearing an ethno-nationalist revival on its northern border, Greece has, to this day, refused to recognize even the existence of the Macedonian minority in Greece. (Similar anxieties are the reason that Greece continues to insist on calling its native Turks, “Muslims.”) When Yugoslavia collapsed in the early 1990’s, Macedonia emerged as an independent state. Irresponsible figures in Skopje and Athens stoked irredentist claims and exaggerated fears, creating today’s deadlock.

The legacy is an emotional issue that burdens relations between two countries that are natural allies and trading partners, not disputants. Still, as the recent clashes over Catalan’s independence bid testify, identity issues can defy logic and pull even peaceable neighbors into conflict anywhere in Europe.

Surrounded by a sea of Balkan hyper-nationalities, Macedonians have to fend off charges that they are an “artificial people” who are “really Bulgarians or Serbs.” The truth is that all identities, including the Greek one, are constructed narratives that draw on both history and myth. Macedonians need a name that affirms their rightful identity independent from Bulgarians, Serbs or Slavs in general. The country has already changed its flag and its Constitution in deference to Greek concerns. Despite this, Athens still worries about a name that could resurrect ethnic Macedonian consciousness and claims against its own region of Makedonia, whose citizens also call themselves Macedonian. As politicians, Tsipras and Zaev both worry about being pilloried by the opposition for selling out national patrimony.

At this point in the drama, the difficulty is less about finding a magic formula than summoning the political will to finally accept one of several viable options. With political forces arrayed favorably, the time has come for Washington to work with allies and the UN negotiator to get the disputants to settle on a solution. A firm deadline is essential. The United States should make it clear to all parties that the goal is to see Greece welcome its neighbor, Macedonia—by a mutually agreed name—into the NATO Alliance by the 2018 summit.