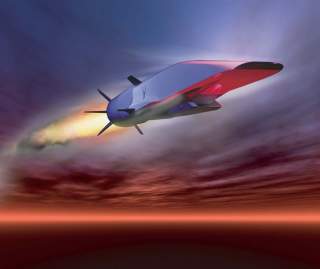 According to some analysts, the development of hypersonic weapons creates the conditions for a new arms race, and could risk nuclear escalation. Given that the course of hypersonic research has acknowledged both of these concerns, why have several countries started testing the weapons?

The United States is building hypersonics for two reasons. First, we want to kill people fast, without the messy danger of a global thermonuclear war. Second, we want to be able to punch through the defensive systems of peer competitors.

Unfortunately, these two justifications contradict one another. Given that China, Russia and even India appear on their way to similar systems, we should take care before letting the technology outpace the politics.

What Are Hypersonic Weapons?

The term “hypersonic” generally refers to a class of long-range precision strike weapons that travel at Mach 5 or better. This definition generally excludes such munitions as the LRLAP (long-range land attack projectile), fired by the Advanced Gun System, which can only travel sixty miles, as well as traditional cruise missiles such as the Tomahawk, which travel under the speed of sound.

Medium-range, conventionally armed ballistic missiles with precision-guidance (such as those operated by China and Russia) are arguably hypersonic weapons. The United States doesn’t operate any of this type, but it provides effectively the same capability as that offered by new hypersonic systems.

Indeed, initial U.S. plans for hypersonic-capable systems concentrated on conventionally armed ballistic missiles, but concerns over attribution and identification (conventional missiles look a lot like nuclear missiles to Russia and China) have shifted attention in the direction of suborbital platforms, including cruise missiles.

The United States is working on the Advanced Hypersonic Weapon, a long-range, land-based glide vehicle that operates within the atmosphere in order to avoid the appearance of a ballistic missile. The United States has also done work on the X-51 “Waverider,” an air-launched, scramjet-powered vehicle capable of Mach 6.

China’s hypersonic vehicle, the WU-14, appears geared toward defeating U.S. ballistic-missile defense systems. Approaching at high speed through a depressed trajectory, it would attempt to exploit a seam between ballistic missile and traditional air-defense capabilities. Russia is apparently working on an array of hypersonic systems, which would include air- and sea-launched missiles that could target land and naval targets.

For the United States, hypersonic vehicles promise the ability to kill anyone, anywhere, on short notice. This capability become a key goal of U.S. security policy with the rise of Al Qaeda in the late 1990s, and the failure of traditional weapons to decapitate the organization before it could launch the September 11 attacks. More recently, the United States has begun to explore how hypersonics could help break apart an A2/AD system, or destroy nuclear or chemical munitions in preemptive anticipation of a launch.

Russia and China face different incentives. The Russians surely understand the appeal of decapitation, but they rarely have the same need to strike across the globe at a moment’s notice. Similarly, the Chinese tend to have more local concerns. The logic behind Chinese and Russian developments lies in the pursuit of anti-access capabilities, as well as the need to keep up with the Americans. Hypersonic strike vehicles could provide a potentially indefensible means of attacking American and allied military installations, as well as U.S. Navy ships at sea.

Is there a hypersonic arms race? Simply because three powers appear to be working along similar lines does not necessarily mean that they’re working against one another; technological imperatives can push everyone in the same direction. We should expect that their strategic interests will push development in different directions, even if the three countries watch each other warily.

When Will They Come to the Battlefield?

Thus far, testing of advanced hypersonic weapons has not gone well. A recent attempted test by the U.S. Army of a new hypersonic vehicle resulted in an abortive explosion four seconds after launch. The Chinese haven’t had much better luck, as tests of the WU-14 have encountered various problems. Of course, we should hesitate before referring to any of these tests as “failures”; tests are intended to discover and solve problems, and it’s clear that these tests identified problems. We know less about the state of Russian systems; Russia habitually overstates its military capabilities for rhetorical purposes, and in any case, the collapse of the Russian economy may prove too much of an obstacle to further technological innovation.

Still, many estimates regarding the operational fielding of hypersonic systems seem to look at the opening of the next decade, with some transitional systems (such as an advanced Brahmos cruise missile) entering service first. Of course, if the United States determines that it needs a hypersonic kill capability immediately, it can simply return to the concept of conventionally armed ballistic missiles.

What does the world look like when several players have access to reliable hypersonic weapons? A lot like it does today, except that the advantages of the powerful become even more pronounced. Hypersonics serve to extend the power of already-dominant states. If your answer to the question “Why is America insecure?” is “Because we can’t kill anyone, anywhere, in less than an hour,” then hypersonics are the weapons for you.

However, some of the rhetoric associated with hypersonic weapons is self-contradictory. On the one hand, we need hypersonic glide vehicles in order to reassure Russia that our attempts at targeted killing aren’t the advance wave of a disarming first strike. On the other hand, we need hypersonics to penetrate Russian airspace if we need to launch a disarming first strike. Given that hypersonics could convey both of these capabilities, we may find that the latter cancels out the former; it will be just as difficult to explain the launch of a hypersonic to Moscow as the launch of a conventionally armed ballistic missile.

We should expect that the United States, China, Russia and even India will continue to develop hypersonic weapons. Each country has its own reasons for the pursuit of such systems, and as such, it’s unlikely that multilateral arms control will work. Moreover, definitional issues (what precisely are the boundaries of such systems?) are probably unavoidable. At the same time, it’s not at all obvious that hypersonics will have a transformational effect on the global military balance.