Machiavelli, Not Metternich: The Pipe Dream of Realignment with Iran 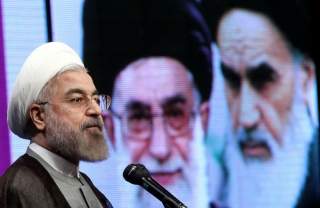 ISIS’ recent triumphs in Iraq have created a new strange bedfellows scenario: Iran and the United States supporting the Shi’ite Iraqi regime against Sunni extremists. This has led to the trumpeting of “a historic rapprochement with Iran” and the possibility of a long-term strategic realignment in the Middle East, with the United States and Iran squaring off against the forces of Sunni extremism, such as ISIS and Al Qaeda. Over time, this realignment could redefine our competitive relationship with Iran into a cooperative relationship, setting the stage for a long-term transformation in the relationship.

The traditional narrative spun by advocates of U.S.-Iranian rapprochement is that “political hardliners” have been the greatest obstacle to mended relations. These same advocates reflexively reach for the example of the Sino-American rapprochement of the 1970’s as a model to demonstrate that reconciliation between bitter foes is possible. Upon closer examination, however, the much-touted Sino-American rapprochement tells a very different story than the traditional narrative: Nixon, among the most hardline Cold War warriors, was able to engineer a strategic realignment of Communist China because the Soviet Union was the mortal enemy of both China and the United States.

Would the United States and Iran be able to arrive at a consensus to set aside their differences to collectively address Sunni jihad? Unlikely. Balance-of-power considerations do not evaporate simply because virulent nonstate actors are the threat of the day. The Concert brought the European great powers together because they perceived revolutionary nationalism as a greater threat to their security than they posed to each other. When the great powers no longer held that assumption to be true, the Concert quickly collapsed. Media hype aside, ISIS has not displaced Iran as the greatest threat to U.S. strategic interests in the Middle East. The same is true on the Iranian side. This suggests that those who hope for strategic realignment will be disappointed.

Critics of this analysis would argue that even if full realignment is unrealistic, cooperation with Iran against ISIS would offer opportunities to incrementally build trust with Iran and transform the U.S.-Iranian relationship in the long term. But without a strategic realignment, the United States is unlikely to lift sanctions and other means of constraining the power of its greatest foe in the Middle East. This would render an opening of relations a nonstarter with the Iranian regime. Even assuming that the United States takes the first steps to détente, the road to transformation is uncertain and requires a lot of time. Surrounded by hostile states, it is unclear that the shared threat of ISIS has the staying power to support a lengthy transformation of the U.S.-Iranian relationship.

Moreover, sustainable transformation has failed in the face of foes far more vicious than ISIS. An instructive case is the history of U.S.-Soviet relations. Despite cool relations prior to the Second World War, the two powers fought alongside one another against the shared threat of Nazi Germany. Billions of dollars of Lend-Lease aid from the United States gave the Soviets much-needed materiel support, and the Soviets took millions of casualties over the course of the war that might otherwise have been borne by the United States. Yet, when the smoke cleared, the Americans and Soviets emerged not as fire-forged friends, but as bitter enemies. In theory, WWII should have been an easy case for transformation, but the elimination of Germany and Japan in fact led to deterioration in the relationship. Balance-of-power calculations once again carried the day. The lesson is clear: transformation works when the balance of power encourages it. U.S. policy makers should cast a dubious eye on propositions that sacrifice realistic objectives in pursuit of the mirage of transformed relations.

Understanding the futility of a policy aimed at realignment or transformation provides the key for developing an effective U.S. response to the current crisis. Threat equals capability multiplied by intention. If changing Iran’s intentions proves unlikely, the solution left is to constrain its capabilities. A natural policy flows from this analysis: protect the energy markets while Iran bleeds itself white fighting ISIS and Sunni extremism. The United States should take action to contain ISIS as much as necessary to protect global energy markets from strong supply shocks. Rather than endlessly frittering away resources propping up the inept regime in Baghdad, the United States should focus the lion’s share of its men and money where it can do some good, by strengthening regional allies, such as Jordan and Saudi Arabia, against the forces of instability in Iraq and Syria.

There may be no such thing as permanent enemies for nations, but there are permanent interests. A day when Iran and the United States reach a consensus may eventually come, but it will come on a day when the balance of power shifts and conditions are ripe for reconciliation. That day is not today, and the threat of ISIS has not fundamentally changed U.S.-Iranian relations. But in danger, there is opportunity. The success of ISIS need not be treated as a disaster. If the United States plays its cards right, it can profit immensely at Iran’s expense. The United States can pass a lot of problems on to Iran, an opportunity not to be squandered in favor of chasing a chimerical rapprochement.

Thomas Vien is a graduate of the George H.W. Bush School of Public Service at Texas A&M University, where he studied US national security policy.