Made in China: A Vietnam-Philippines Axis 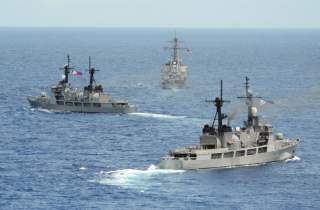 Vietnam and the Philippines, which have long-standing territorial disputes in the South China Sea, are forming a strategic partnership. Worried over the rise of China and, in particular, Beijing’s increasingly belligerent actions in pursuit of its own territorial claims, Hanoi and Manila are banding together.

The two rivals are moving beyond symbolic displays of unity—sports matches on disputed islands—and on to substantive cooperation: joint naval exercises and patrols as well as new trade initiatives. Neither country wants to see China extend control over the entirety of the South China Sea, which seems to be its aim. Both Vietnam and the Philippines have come to realize that China poses a greater threat to each than they do to each other.

That Manila and Hanoi are choosing to balance rather than bandwagon may come as somewhat of a surprise to Beijing, which offers the promise of access to its market of 1.3 billion consumers and has lots of cash to throw around. In any case, the thinking in Zhongnanhai seems to go, a Sino-centric Asian order is the natural Asian order. As China’s former Foreign Minister Yang Jiechi may regret asserting so publicly back in 2010, “China is a big country and other countries are small countries and that’s just a fact.”

But now, having seized territory from the Philippines, plopped a massive oil rig in Vietnam’s exclusive economic zone, and carried out numerous other sorts of provocations in recent years, China is beginning to reap what it has sowed. Much to its chagrin, China has pushed its neighbors closer together and driven them into the arms of the United States.

The advent of a Vietnam-Philippines strategic partnership should be particularly troubling for Beijing. If the two follow through on the partnership’s promise and engage in substantial security cooperation despite having overlapping territorial claims, that will suggest the bilateral dispute has been downgraded to a secondary issue.

(Recommended: How to Avoid a U.S.-China War)

Why does that matter to China? First, it will suggest to the other South China Sea claimants that they really could hammer out a deal if not for Chinese bellicosity. If Vietnam and the Philippines, two countries that have a substantial maritime territorial dispute, can carry out joint naval patrols, then disputes are no reason for rival maritime forces to constantly be at odds. It will also clarify that Beijing has opted for coercion over cooperation, potentially further straining its diplomatic ties to the Association of Southeast Asian Nations.

Second, a Vietnam-Philippines condominium could curtail Chinese freedom of action in the South China Sea. A natural next step for Manila and Hanoi would be to begin sharing maritime surveillance and reconnaissance information, which could better prepare both to handle Chinese provocations and, indeed, may deter some of those provocations by depriving Beijing of the element of surprise.

The new strategic partnership, moreover, may open the door to more substantive multilateral efforts to balance China. It may not be long before the United States, which is an ally of one and is deepening security ties with the other, joins the Philippines and Vietnam in trilateral naval exercises. Japan, also a U.S. ally, is likewise enhancing its security relationship with the two Southeast Asian countries. The United States and Japan are also building defense relationships with India, which is training Vietnamese submarine crews and has an agreement in place with Hanoi for oil and gas exploration in the disputed waters of the South China Sea.

In short, the South China Sea is host to a growing web of security relationships, all largely driven by concerns over Chinese intentions and behavior. It seems only a matter of time—barring a major discontinuity in the conduct of Chinese foreign policy—before the threads of this web are knitted together.

Conventional wisdom suggests that this will be a slow, cautious process. But that process is already accelerating. What’s more, recent Vietnamese and Philippine decisions—the strategic partnership; the Philippines’ pursuit of international arbitration in its dispute with Beijing; Vietnam’s pursuit of closer security ties with wartime foe Washington—suggest Hanoi and Manila have decided that caution in their approaches to China may not be the better part of valor. As China continues to push outward into the South China Sea, others are likely to follow suit.

Beijing has long adopted a divide-and-conquer approach to its neighbors. It is an approach that, at times, has borne fruit. China may soon learn that unite-then-conquer is not nearly as effective.