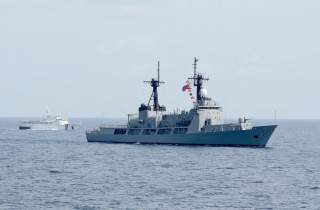 Editors Note: This is the second in a two-part series assessing the legal strategies of the South China Sea claimants in their broader strategic context. Here, the author analyzes the strategy of the Philippines. For part one, please click here.

The Philippines must often feel as if it is engaged on the wrong side of a David-and-Goliath dispute in the South China Sea. In almost every respect, Manila finds itself at a disadvantage: it lacks the capability to protect its claims against sustained intrusions; its claims rest on shaky legal grounds; its friends and allies are unwilling to go to war to defend those claims; and its opponents are committed, cunning, and powerful.

Yet despite the odds, Manila has fared remarkably well, in large part because it has been able to capitalize on its strengths and conceal its weaknesses. After realizing that a dispute on China’s terms was no dispute at all, the Philippines turned the tables on Beijing with a pro-active strategy designed to exact concessions from its larger neighbor by forcing China to choose between specific maritime claims and its long-term interest in regional stability.

This strategy has evolved over time as China has responded in kind. At first, Manila relied heavily on efforts to change the situation on the ground and to internationalize the conflict. However, China was able to counteract the Philippines at each step with its greater maritime presence and international political capital.

As a result, the Philippines has recently turned to a third element of its pro-active strategy: international law. Despite the weakness of its own claims, the Philippines has been able to mastermind a comprehensive campaign against Beijing grounded in international law. This assault has centered around an arbitration case filed against China in January 2013, which has successfully—at least so far—backed the larger nation into a corner. But while this arbitration will be a critical waypoint for Manila along the road to consolidating control over its claims, it also raises unsettling questions about the unstable dynamic that has gripped the region.

In many respects, the Philippines has been dealt a losing hand in the South China Sea dispute. Like China, the Philippines must contend with a serious strategic dilemma. On the one hand, it wants to consolidate control over its South China Sea claims. This ambition is buoyed by the fervent nationalism of its citizens, who loudly object either to any concessions on the Philippines’s part or to encroachment on the part of other contestants. On the other hand, though, Manila must also nourish its network of relationships in the region, including its ties with its fellow ASEAN members, with China, and with the United States. It’s no easy task for the Philippines to maintain amicable relations with its chief South China Sea rivals, many of whom possess far stronger legal claims than it does. It’s even harder when nurturing any one relationship can often appear to come at the expense of the others, given the zero-sum competition between many of the Philippines’s neighbors.

The dilemma is particularly thorny with respect to the Sino-Philippine relationship. China is the Philippine's chief competitor for control of the South China Sea. But China is also one of Manila’s primary trade partners, even if the Philippines depends relatively less on it than do other states in the neighborhood. In the past, Beijing has not been afraid to leverage its economic heft to express its displeasure with Philippine policy: during the Scarborough Shoal standoff, for example, China curbed imports of Philippine bananas and obstructed tourist visits.

More importantly, the Philippine navy pales in comparison to the People’s Liberation Army Navy. In a conflict between the two forces, the Philippines would face an uphill battle at best; a more honest assessment would describe the situation as “hopeless.” A similar disparity exists between the two nations’ civilian maritime enforcement capabilities. And when tensions flare, some in China have not been afraid to stress the Philippine military’s comparative weakness. Also during the Scarborough Shoal standoff, Chinese General Luo Yuan noted slyly that “considering the relative military strengths of China and the Philippines, the Filipino people can judge for themselves the wisdom or otherwise of their government’s decision to take this stand against China.”

Even the Philippines’s friends are not always dependable. Although Manila is a longstanding treaty ally of the United States, relations between the two countries have sometimes been rocky. Of course, Manila has ramped up its cooperation with Washington in recent years as the threat posed by China has grown more ominous. But despite its best efforts, the Philippines has been unable to persuade the United States to clarify the exact scope of their mutual defense treaty, and particularly how much it applies to disputed territory in the South China Sea. The Philippines also worries that even if Washington is theoretically committed to its Asian pivot, it may not be able to deliver because of budgetary woes at home.

In short, the Philippines finds itself in a rather disadvantageous strategic situation. It is engaged in a territorial dispute against a set of adversaries who possess relatively stronger legal claims. Its main rival sits atop the world’s second largest economy and far superior naval assets, and has demonstrated dedication and shrewdness in prosecuting its claims. Set against this formidable set of challenges, the Philippines has only a few uncertain—if strengthening—relationships with external powers like the United States and Japan.

But despite the hand it has been dealt, Manila has been playing the game remarkably well. First and foremost, the Philippines has identified a clear objective: a quick resolution to the dispute on the best possible terms. Unlike China, the Philippines has no interest in dragging out the situation. Its primary rival grows relatively stronger every year, and the island nation may not be able to count on its friends and allies—especially the United States—in the long run.

The Philippines can also afford to resolve the conflict in the short-term because its strategic dilemma is less pressing than China’s in many respects. True, Manila is also caught between the twin desiderata of regional peace and territorial sovereignty. But unlike China, the Philippines does not depend nearly as much on regional interdependence for its long-term growth. Even if a regional conflagration were to erupt, the Philippines would still be able to trade with its largest commercial partners, the United States and Japan. And while Manila might feel the pinch of any interruption in trade between China and the Philippines, it would not be a mortal blow for the island nation’s economy. In fact, the Philippines already displayed its willingness to soldier on in the face of (admittedly limited) Chinese economic retaliation during the Scarborough Shoal standoff.

This willingness to incur short-term costs has allowed the Philippines to exploit China’s strategic dilemma. Manila recognizes that Beijing is highly committed to its territorial and maritime claims, but Manila also knows that China is constrained by its dependence on globalization and globalization’s prerequisite, relative regional stability. China may want to control the South China Sea, but it also has larger global ambitions that require it to continue growing and modernizing. The Philippine strategy is simple: set China’s two objectives—the South China Sea and long-term growth—against each other, and then bank on the fact that China cares more about the latter than the former.

In practice, Manila has implemented this strategy by adopting a proactive and even a confrontational posture in the dispute. The Philippines hopes to exact concessions by escalating the conflict in a way that China is unwilling to match for fear of imperiling its long-term growth. In effect, David is deliberately goading Goliath in the hope that the better angels of Goliath’s nature—or at least his strategic interests—will stay his hand in the dispute.

The strategy also aims to turn the Philippines’s greatest weakness—the remarkable disparity in power between the two contenders—into a source of strength. The Philippines calculates that any counter-assertiveness by China will redound to Manila’s benefit internationally because China will appear to be the aggressive party that is picking on its weaker neighbor. After all, in the eyes of the international community, why would the Philippines start a fight that it was destined to lose? In effect, Manila can escalate safely because it is weak; Beijing will always look like the bully when it responds.

The Philippines has carried out this pro-active strategy using three distinctive tactics: (1) changing the facts on the ground; (2) internationalizing the dispute; and (3) wielding international law.

At first, the Philippines relied heavily on a combination of resource exploitation and arms purchases in order to alter the on-the-ground strategic reality. In terms of resource exploitation, Manila has encouraged its fishermen to venture further offshore, often sailing deep into the heart of contested areas. It has also prospected and drilled in these areas for oil and gas. In terms of arms purchases, the Philippines has augmented its naval and coast guard capabilities by turning to benefactors such as the United States and Japan. It has also demonstrated that it is not afraid to use these forces to try to tinker with China’s calculus, including by detaining or expelling hundreds of Chinese fishermen caught in disputed areas. Just recently, Manila arrested eleven Chinese fishermen in disputed waters near the Spratly Islands; it intends to prosecute nine of them for illegally poaching sea turtles.