Maintaining the Relevance of the Future Carrier Air Wing 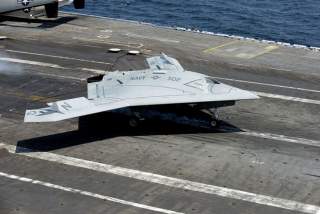 On July 16, I had the honor of testifying before the House Armed Services Committee’s Subcommittee on Seapower and Projection Forces on the issue of requirements for the US Navy’s Unmanned Carrier-Launched Airborne Surveillance and Strike (UCLASS) aircraft. Over the past month, debate within the Department of Defense (DoD) on the future of the UCLASS program has intensified and has now reached a culminating point. This week, senior Pentagon officials will meet to decide whether to proceed with a program focused on developing an aircraft optimized for conducting intelligence, surveillance, and reconnaissance (ISR) missions in low-to-medium threat environments, or to revert to the original intent of the program – producing a carrier-based aircraft capable of conducting both ISR and strike missions in the high threat, anti-access/area-denial (A2/AD) environments anticipated for the 2020s. In response to my testimony, a congressman posed a question germane to the upcoming DoD deliberations on UCLASS: “Since the Navy and OSD/Joint Staff vetted the UCLASS requirements, has additional information come to light to warrant a change to those requirements at this stage of the acquisition process?”

The short answer is yes.

Countering emerging A2/AD challenges was OSD’s motivation for initiating the Navy’s Unmanned Combat Air System (UCAS)/UCAS-Demonstration program in the 2006 Quadrennial Defense Review (QDR), and for providing an additional $2 billion for these efforts in the Pentagon’s FY11 Program and Budget Review. The need for a longer range, survivable, carrier-based air vehicle for ISR and strike in contested airspace was articulated throughout the 2010 QDR process and affirmed in testimony to Congress on several occasions by senior Navy officials.

The current key performance parameters (KPPs) emerged from a highly contentious—and still unsettled—debate within DoD over the past two years. There are essentially four schools of thought on this issue. One seeks a lower-end, carrier-based unmanned aircraft system (UAS) optimized for counter-terrorism missions as a hedge against the potential loss of land-bases for armed UAVs such as the MQ-1 Predator and MQ-9 Reaper. A second school believes that the Navy requires additional, carrier-based ISR capability to provide persistent “maritime domain awareness” for carrier strike groups (CSGs). A third school is willing to dilute UCLASS requirements to reduce bureaucratic and cultural resistance within the naval aviation community in order to “get something” onto the carrier deck. A fourth school argues fervently that a stealthy, air-refuelable ISR-strike UAS is needed to maintain the operational relevance of the carrier air wing in the face of emerging A2/AD threats. Importantly, only the latter would offer “pan-conflict spectrum utility,” meaning that it would be equally capable of performing the counter-terrorism, MDA, and counter-A2/AD power projection missions.

What has changed since this debate was first joined is a growing awareness within DoD and the national security community of the increasing scale and scope of the A2/AD challenge, and of the accelerating pace at which it is unfolding.  Meanwhile, the once-feared loss of land bases to support counter-terrorism operations in the Middle East, Central Asia, and Africa has not materialized and there are no signs that it will. While it is difficult to say whether counter-terrorism operations will be as prominent in the mid-2020s when UCLASS is scheduled to field as today, current trends suggest that the US military will retain a wide range of options for basing long-range UAVs such as the extended-range MQ-9 Reaper and RQ-4 Global Hawk. In contrast, A2/AD threats to the aircraft carrier and its embarked air wing are clearly intensifying.

Although several countries around the world are fielding A2/AD capabilities, China is, without question, the pacing threat. In its most recent Annual Report to Congress on Military and Security Developments involving the People’s Republic of China, DoD highlights myriad A2/AD threats to the aircraft carrier including air-, sea-, and submarine-launched anti-ship cruise missiles; wake-homing torpedoes from a growing and increasingly capable submarine fleet; and long-range, anti-ship ballistic missiles (ASBMs). It states:

In addition to the carrier being potentially pushed well outside the unrefueled combat radius of its embarked fighters, its complement of F-18E/F and F-35C fighters will also confront increasingly deadly land- and sea-based integrated air defenses (IADS). Not only are modern IADS diffusing widely around the globe, they are also growing more lethal owing to several synergistic trends: more sensitive radars operating over wider frequency bands, increased resistance to electronic attack (e.g., jamming and spoofing), increased surface-to-air missile (SAM) range, more advanced signal processing to establish target tracks more quickly and effectively, and high-speed networking for sharing targeting information. Variants of the Russian-made S-300 (SA-10/20) SAM system, for example, are already in service in about a dozen countries, including Algeria, Armenia, Azerbaijan, Belarus, Bulgaria, China, Slovakia, and Venezuela. Both Iran and Syria have repeatedly attempted to procure the S-300 SAM units from Russia. China has already fielded a dense, networked IADS. As the most recent Annual Report to Congress on Military and Security Developments involving the People’s Republic of China states:

China’s ground-based air defense A2/AD capabilities will likely be focused on countering long-range airborne strike platforms with increasing numbers of advanced, long-range SAMs. China’s current air and air defense A2/AD components include a combination of advanced long-range SAMs – its indigenous HQ-9 and Russian SA-10 and SA-20 PMU1/PMU2, which have the advertised capability to protect against both aircraft and low-flying cruise missiles. China continues to pursue the acquisition of the Russian extremely long-range S-400 SAM system (400 km), and is also expected to continue research and development to extend the range of the domestic HQ-9 SAM to beyond 200km.

Prospective adversaries are also investing in more capable air superiority fighters, outfitted with modern sensor systems and armed with beyond-visual-range (BVR) air-to-air missiles. These aircraft can be vectored—in some cases, in large numbers—to intercept US aircraft based on rough targeting tracks developed by ground-based low frequency early warning radars.  This has major consequences for US airpower, which is currently dominated by fighter aircraft whose limited unrefueled radius keeps them on a short tether from aerial refueling or “tanker” aircraft.  US tankers will need to honor both the unrefueled radius of adversary fighters, and also the range of their BVR missiles, when maintaining aerial refueling “tracks” (rendezvous points) for penetrating US aircraft.  Against a nation such as China, which has a growing force of air interceptors with unrefueled combat radii between 600-900 nautical miles, this would require US tankers to stand off as much as 750-1,000 nautical miles from the Chinese coast.  It is critical to note that this standoff distance exceeds the unrefueled radii of the F/A-18E/F, F-22 and F-35A/B/C – and thus would effectively preclude a penetrating offensive role for the entire US fighter force.  No fact more vividly underscores the need to shift emphasis within the attack capability area from short-range, manned fighter aircraft to penetrating, long-range, manned and unmanned ISR-strike systems.

Responding to this growing appreciation of the intensifying A2/AD threat around the world, the 2014 Quadrennial Defense Review (QDR) stressed the need to improve US power projection capability in contested environments. Consider the following excerpts from the QDR:

In the coming years, countries such as China will continue seeking to counter U.S. strengths using anti-access and area-denial (A2/AD) approaches and by employing other new cyber and space control technologies. Additionally, these and other states continue to develop sophisticated integrated air defenses that can restrict access and freedom of maneuver in waters and airspace beyond territorial limits. Growing numbers of accurate conventional ballistic and cruise missile threats represent an additional, cost-imposing challenge to U.S. and partner naval forces and land installations.

As the Department rebalances toward greater emphasis on full-spectrum operations, maintaining superior power projection capabilities will continue to be central to the credibility of our Nation’s overall security strategy.

The need to adapt US power projection capabilities to address current and emerging A2/AD challenges has also been reaffirmed recently in the independent review of the QDR conducted by National Defense Panel created by Congress. That panel, chaired by William Perry and John Abizaid, unanimously concluded that:

We believe it is also critical to ensure that U.S. maritime power projection capabilities are buttressed by acquiring longer-range strike capability…that can operate from U.S. aircraft carriers or other appropriate mobile maritime platforms to ensure precise, controllable, and lethal strike with greater survivability against increasingly long-range and precise anti-ship cruise and ballistic missiles.

To conclude, the current Joint Requirements Oversight Council (JROC)-approved UCLASS requirements appear increasingly misaligned with DoD’s own threat assessment and articulation of the Nation’s overall security strategy, as expressed in both the 2014 QDR and in the 2012 Defense Strategic Guidance approved by President Obama.