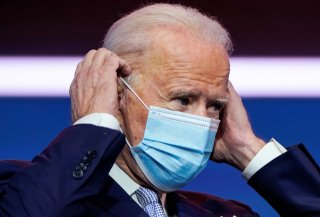 A majority of poll participants in a new survey released Tuesday think President-elect Joe Biden should prioritize coronavirus and economic-related measures during his first one hundred days in office.

Sixty-seven percent of participants said passing a new stimulus package should be “a top priority” during Biden’s first one hundred days in the White House, with 16 percent saying it’s “an important, but lower priority,” five percent polling it’s “not too important a priority,” five percent saying it shouldn’t be done and seven percent having no opinion at all, according to a Morning Consult-Politico tracking poll.

A similar scope of participants said the same about combating the spread of the virus and establishing an effective vaccine distribution plan, as 68 percent said “controlling the spread” is “a top priority,” 15 percent said it’s “an important, but lower priority,” five percent said it’s “not too important a priority,” five percent said it shouldn’t be done and seven percent had no opinion at all. About 67 percent of respondents said that forming a coronavirus vaccine distribution plan should rank as “a top priority” for the president-elect, with 14 percent saying it’s an important, but secondary priority, four percent polling it’s not too important of a priority, six percent saying it shouldn’t be done during his first three months in office and nine percent having no opinion at all.

“That poll’s results are striking: dealing with Covid is the only priority over which there is anything resembling a consensus,” Eric Leeper, economist and Paul Goodloe McIntire professor of economics at the University of Virginia, said via email.

Leeper added that there is an “urgent need” for another stimulus package, “particularly for workers and small businesses. It SHOULD happen before Biden takes office, but it won’t. The reason for early action is to resolve the uncertainty that households and firms now face, with the virus spreading rapidly and fresh shutdowns on the horizon. If people today can, at best, expect relief in February, it may arrive too late to help them over coming months.”

Other priorities that respondents said should be a “top priority” for the president-elect during his first one hundred days are: passing a health-care reform bill (42 percent), fixing relationships with U.S. allies (39 percent) and adding a new public option to the Affordable Care Act (35 percent)—a provision that’s included in Bidencare, an even bigger health-care plan that would replace the Obama-era law in the event it got overturned by the Supreme Court.

The Morning Consult-Politico poll also revealed that 53 percent of respondents would vote for Trump in the 2024 Republican primary, followed by Vice President Mike Pence at 12 percent and Donald Trump Jr. at 8 percent.

A similar poll released last week also found that Biden should focus on issues relating to tackling the pandemic and a strained economy during his first one hundred days in the White House, as 66 percent of voters said “COVID-19 relief legislation” should rank as a top priority for the incoming president, with other leading items like containing the spread of the virus, devising a cohesive vaccine distribution plan and stimulating economic recovery.

But talks between House Speaker Nancy Pelosi (D-Calif.) and top President Donald Trump administration negotiators have been on and off for months, with the Democratic House passing two multi-trillion-dollar proposals—both rejected by White House aides and GOP senators. Treasury Secretary Steven Mnuchin shot back with a slimmed-down counter offer that was forcefully rejected, and Senate Majority Leader Mitch McConnell (R-Ky.) has recently said that Congress should pass a small version of the massive spending measure to focus on key sectors of the economy that are particularly drowning in debt.

With Congress in a complete deadlock, nearly twelve million Americans will see a cutoff in their unemployment benefits the day after Christmas after two federal jobless aid programs’ benefits are slated to expire. But even with this report, McConnell and Pelosi haven’t convened to contest the next bill for several weeks, despite the brutal economic impacts of the second, deadly wave of the virus.

“The extent of relief should depend explicitly on prevailing economic conditions. Rather than committing resources for a pre-specified period, resources should be made available as needed,” Leeper said. “The problem with previous Covid acts is that relief expired many months before the crisis passed. Explicit dependence on economic developments helps to anchor people’s expectations on the idea that relief will be available as long as it is needed.”