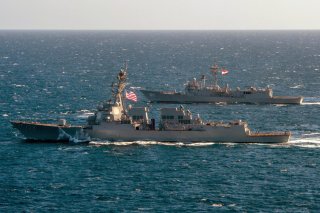 For good, ill, or indifferent, human beings are bundles of habits. So are institutions, which are nothing more than groups of human beings embarked on a common enterprise. It behooves individuals and institutional leaders to acknowledge this basic fact and work to groom themselves and their organizations with habits conducive to the common cause, inculcating virtue while battling vice. This effort is doubly important and doubly hard within alliances, which by definition cross-national if not civilizational boundaries. Fashioning a common culture takes conscious effort, day in and day out.

At any rate, that seems to be the conceit underlying U.S. Pacific Fleet commander Samuel Paparo’s recent address to the WEST 2022 conference, which convened in San Diego this week. Asked whether the Pacific Fleet should join with the Japan Maritime Self-Defense Force leadership in a joint task force (JTF), Paparo replied: “I would not advocate for the stand-up of a JTF. My advocation right now is our continued operation as is, which implements the behaviors, the habits of mind, the habits of action that lead us to become a JTF.”

Just so. In other words, habits of working together lay the groundwork for common action between U.S. and Japanese maritime forces. Put fitting habits of thought, feeling, and action in place now, and a formal arrangement like a joint task force could follow later should Washington and Tokyo see the need.

Aristotle would agree. The ancient world’s philosopher of habit urged individuals to cultivate certain virtues within themselves. That meant making a habit of striking a “golden mean” between the excess and the deficiency of a family of traits. Locating the golden mean might mean simply splitting the difference between extremes of some trait; it might mean tending toward the excess or deficiency. Take courage, for instance. The excess of physical courage would be foolhardiness, cowardice the vicious deficit. But the golden mean might lie somewhat toward the excess. After all, it takes some measure of recklessness to step onto the battlefield, where wounds or death may await.

The person who imprints the right array of characteristics on his or her intellect and character stands to be a virtuous person. To become virtuous, opines Aristotle, aspirants to virtue should study and emulate—or shun—examples from history or the contemporary world, and then practice virtue and abjure vice on a daily basis until virtue becomes second nature. They should imitate praiseworthy people while rejecting the blameworthy. In that sense, biography represents the surest guide to virtue. We become virtuous by repeatedly acting virtuously in mind, temperament, and deed.

Striving for virtue is a corporate endeavor as well. In fact, Aristotle judges a political regime in part by how well it nurtures virtue within a society. Good regimes enact laws that uplift the populace; bad regimes debase the people. This applies likewise to institutions such as the U.S. Navy and the Japan Maritime Self-Defense Force. As Paparo pointed out in San Diego, instilling a common set of virtues through habit, as well as practicing in unison on the operational and tactical levels, yields a cohesive combined force able to grapple with a powerful, united adversary such as China’s People’s Liberation Army Navy or Russia’s Pacific Fleet.

It's good to hear testaments like this from top allied leaders. Take it from an Athenian of old: the force that gets in its reps in peacetime primes itself for success. Let the allied maneuvers and exercises continue—and let’s lose no opportunity to put to sea a genuinely unified, culturally coherent fighting force.

James Holmes is J. C. Wylie Chair of Maritime Strategy at the Naval War College, a Nonresident Fellow at the University of Georgia School of Public and International Affairs, and the author of Habits of Highly Effective Maritime Strategists (2021). The views voiced here are his alone.