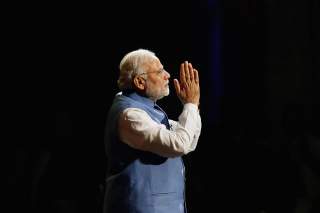 NATIONALISM HAS become a formidable force in India, the world’s most populous democracy. Prime Minister Narendra Modi’s Bharatiya Janata Party (BJP, or Indian People’s Party) portrays India as a once-glorious Hindu civilization whose identity and power were eroded—first by successive Muslim invasions that culminated in the establishment of the Mughal Empire (1526–1857), and thereafter, until 1947, by British colonialism. For more than half a millennium, in the BJP’s telling, many Hindus were forcibly converted to, or duped into adopting, Islam and Christianity. English became the intelligentsia’s lingua franca. Civilizational self-confidence gave way to feelings of weakness and inferiority—or so goes the Hindu nationalists’ narrative.

Independence did not, in the BJP’s view, eliminate this pathology, because Indian leaders (the first prime minister, Jawaharlal Nehru, remains the nationalists’ prime example) and intellectual class remained in thrall to Western ideas and institutions. Hindu nationalists believe that India can reclaim its greatness only by advancing economically and militarily, while drawing on the past, Hindu civilization in particular, for inspiration, pride, identity and political principles. Modernity severed from history, religion and tradition is, in their eyes, a recipe for deracination and submissiveness, not glory. The BJP proclaims that its elixir, combining modernity and tradition, will make India great again.

This is the narrative of India’s past and vision of its future to which Modi, the BJP and its kindred cultural organizations are committed. The consequences of their efforts to realize their goals will matter—and not just to Indians. With an area of nearly three million square kilometers, India is the world’s eighth-largest country. Its population of 1.3 billion people will soon surpass China’s, and the Indian diaspora numbers thirty million, including four million in the United States, about half of them Hindus. (This in itself says nothing about the attitudes of people of Indian origin in the United States—whether citizens or not—toward the BJP, but the party and its affiliated organizations have certainly sought to cultivate them.) At $2.3 trillion, India’s GDP ranks seventh worldwide, and its economic power is supplemented by nuclear weapons and a powerful conventional military force. Thus the reverberations, good and bad, of BJP-style Hindu nationalism are likely to reach well beyond India’s borders.

WHEN INDIA won its independence from Britain in 1947, it lacked any of what are now commonly considered the prerequisites for a strong new democracy. The overwhelming majority of Indians lived in villages, and were dirt poor to boot: per capita GDP then was around $618 (in 1990 constant dollars), compared to $6,600 in 2016, which still places India in 160th place worldwide. Back then, Indians could anticipate an average lifespan of thirty-two years, versus 67.8 years now, and only 12 percent were literate, compared to 74 percent today.

Yet Indian democracy, despite its shortcomings (many traceable to endemic corruption), has proved remarkably resilient, defying the early obituaries. At all levels of India’s political order, power changes hands regularly through elections. Voter turnout (64 percent in the 2014 national election) is generally higher than in the United States (55 percent for the 2016 presidential election). India’s central and local legislatures are forums for raucous debate, if not always for efficient or enlightened lawmaking. The Indian press operates in numerous languages and with remarkable freedom. The army, the bane of democracy in many developing countries—including India’s neighbor and cultural kin, Pakistan—has stayed out of politics.

Sixty years on, this record is remarkable, particularly for a country that remains largely poor and is a kaleidoscope of languages, religions, castes and cultures. True, Indian democracy has appeared in peril at times—notably during Prime Minister Indira Gandhi’s “Emergency” rule (1975–77), when she curtailed democratic rights and jailed opposition leaders, relying on constitutional provisions available to the largely symbolic Indian presidency. But her confidence, based on the claims of sycophantic advisers, that she would achieve a sweeping electoral victory that would enable the consolidation of an illiberal polity, proved misplaced. The voters handed her a stunning defeat, preserving India’s democratic political trajectory.

THE PRESENT danger does not emanate solely from the pinnacle of the political order, as was largely true during the Emergency. Nor can it be reduced to the personality and proclivities of one political leader. To be sure, the ruling BJP, headed by the charismatic, silver-tongued Modi, champions Hindutva, which effectively conflates being authentically Indian with being Hindu—per a distinctive, rigid definition of what Hinduism entails and represents. But the Hindutva project is also being pushed from below, especially by an organization linked to the BJP from which many of its top leaders, including Modi, have emerged: the Rashtriya Swayamsevak Sangh (RSS, or National Volunteer Society). Complementing the BJP and RSS (Modi joined the latter in 1971 when he was twenty-one, and rose through the ranks to become its national general secretary) are the Vishwa Hindu Parishad (VHP, or World Hindu Council), established by some RSS leaders in 1964; its militant youth wing, the Bajrang Dal; and the Akhil Bharatiya Vidyarthi Parishad (ABVP, or All-India Student Council), a powerful presence on university campuses. These and other like-minded organizations constitute the Sangh Parivar (loosely, the Family of Societies).

In ideological coherence, organizational resources and popular appeal, the Hindutva movement commands greater resources than Indira Gandhi could muster during the brief Emergency years. The acolytes of Hindu nationalism have also proven fervent and skillful in spreading their message, through persuasion as well as occasionally force. Their commitment to religion-based nationalism presents a greater hazard to Indian democracy than the Emergency did, because India contains 170 million Muslims (more than any other country save Indonesia), as well as Christians, Jains, Sikhs, Buddhists, Jews and Zoroastrians. Although Hindutva has encountered resistance from other Indian political parties, the press and civil society, non-Hindus in particular cannot but feel threatened by its words and deeds, which slyly cast doubt on their status as authentic citizens without denying it outright.

Imagine being an Indian Muslim who hears of coreligionists being beaten up, even killed, by Hindu nationalists who consider the cow sacred and do not want a country in which those so inclined can eat beef. Or consider what non-Hindus of any religion, and Indian Hindus who believe that the state should not owe fealty to any single faith—which, incidentally, the Indian constitution stipulates—feel amid cultural campaigns to rewrite curricula and to memorialize a once-glorious Hindu era during which Vedic mathematics and science dominated the world, and the Aryans, whom Hindutva presents not as a people who migrated to India but as indigenous, spread enlightenment far and wide. If you are a journalist, college student, scholar, writer, or activist in a civic group who condemns the chauvinism of Hindutva, you could face vilification and death threats, or even murder.

In short, the specter of Hindu nationalism haunts BJP-ruled India. Attacks on minority communities have become common, and academics, students and journalists who highlight the harassment and intimidation are subjected to public calumny, and have occasionally been killed. Yet top BJP panjandrums make no secret of their animus toward Muslims, as well as other minorities and ideological adversaries, regardless of what religion they practice. The RSS, with its trademark white shirts and khaki shorts, martial drills, patriotic slogans and songs, and distinctive salute (right hand on the chest, the palm facing down), serves as the party’s force multiplier and base. It now feels at liberty to demonize Muslims—essentialized despite being divided by class, language, culture and cuisine, as well as interpretations of Islam—and even paint them as a virtual fifth column for India’s archfoe, Pakistan.

THE FOUNDERS of the modern Indian republic understood that a country of such religious, ethnic, linguistic and cultural diversity required a political order suited to fostering harmony through the habit of compromise. They designed a secular constitution that could accommodate and manage India’s heterogeneity. Yet the Indian conception of secularism differed from its Western counterparts. Instead of creating a wall of separation between temple and state, India’s leaders, most notably its first prime minister, Jawaharlal Nehru of the Indian National Congress (INC), forged a constitutional order that respected all faiths. Seventy years after the country’s independence, those arrangements are now under frontal assault. To understand how India arrived at the BJP moment, it helps to identify the historical catalysts and turning points—including an acknowledgement that the Congress Party has itself undermined the principles with which it was long identified.

From the outset, a small but vocal minority within the Indian political class rejected the constitutional commitment to secularism. Especially in the post-independence era, this staunchly anti-secular element found a home in the Bharatiya Jana Sangh (BJS), an anticommunist, pro-business party that stood for the creation of a Hindu polity. Given the extraordinary role that the INC had played in the national independence movement, and its success in folding a range of political viewpoints into an inclusive structure, the BJS made only limited electoral headway. So did the RSS, which was established in 1925.

The political weakness of the BJS and Nehru’s towering influence within the INC ensured that there were few serious challenges to India’s secular ethos and practices during the first several decades of Indian independence, and that the country made progress on a range of social issues that could have easily rent the nascent republic apart. Between 1952 and 1956, for example, under Nehru’s tutelage, the Indian parliament passed four bills that significantly reformed a range of Hindu customs and practices. Quite predictably, the BJS insisted that Muslim personal laws relating to matters such as divorce and inheritance also be modernized. However, Nehru demurred, arguing that Muslims had just emerged from the trauma of the subcontinent’s partition and that the issue should be deferred. In consequence, Indian Muslims retained a separate legal code on personal matters.