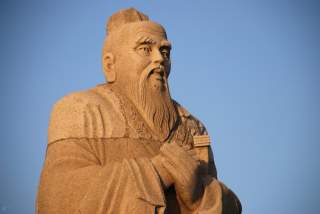 Inside a modern lecture hall at The George Washington University (GW), a well-respected guest lecturer from China addressed me and the other women in his audience as “female comrades.”

I nearly spat out my tea.

It was a lazy April Saturday afternoon in Washington, DC. I had come to GW to attend a symposium sponsored by the university’s Confucius Institute, a Chinese language and cultural center. Meant to be a vehicle for exporting China’s soft power, Confucius Institutes—funded by Beijing and numbering over four hundred—have sprung up around the world during the past decade.

China’s state-sponsored cultural exports inevitably create controversy in the West. Critics warn that educational institutions receiving financial support from the Chinese authoritarian regime risk ceding control of their curriculum, academic freedom and intellectual integrity. Just last year, the University of Chicago severed its relationship with the Confucius Institute due to intense faculty opposition, while the Toronto District School Board terminated an agreement that would have allowed the Confucius Institute to teach Chinese to elementary school children.

Yet whatever role politics might play in China’s soft power expansion, my first visit to a Confucius Institute event proved educational, even if it was pockmarked with numerous cultural incongruities.

The symposium at GW focused on Chinese medicine and featured lectures delivered in Chinese by renowned doctors from China. The audience consisted of mostly Chinese individuals of varying ages and a few Americans who were learning the Chinese language. A woman who once taught Chinese to former Australian Prime Minister Kevin Rudd sat next to me.

In America, none of us in the audience was a comrade, even if a visiting lecturer innocently referred to us as such when answering a question about women’s health issues.

“For Chinese culture to go out [into the world], the biggest challenge comes from ourselves, from our lack of consciousness,” Xu Lin, the Chief Executive of Confucius Institute Headquarters, once said in an interview with a Chinese newspaper. Indeed, the controversies surrounding the Chinese government’s political agenda for the Confucius Institutes have overshadowed the fact that in grand experiments of cultural exchange, the biggest differences are rooted in culture, and they often surface in unguarded and unscripted moments when cultures rub up against each other.

At GW, the cultural incongruities manifested themselves in different ways beyond an innocent reference to “female comrades.” For one, the young Chinese women in the audience answered the questions posed by the lecturers with an eagerness rarely seen in an American lecture hall. Their objective, it seemed, was to please the guest lecturers.

Such behavior would have been expected in a Chinese classroom. After all, Confucian propriety dictates that students respect and even revere their elders and teachers. American students, on the other hand, tend to make a habit of questioning, challenging and ignoring their professors. As such, falling asleep in class is as hallowed an American tradition as telling the professor why he or she is wrong.

So when participation at a symposium was voluntary and nobody was getting a grade, the phenomenon of young women enthusiastically raising their hands seemed like an odd Chinese habit showing up in an American lecture hall.

While somewhat out of place, this habit was at least preferable to another Chinese habit that manifested itself as well: Chinese people cutting in line. During a break between lectures, I went up to the head of the Chinese delegation to ask a question. As I waited for other audience members to finish their conversations with him, a middle-aged Chinese man shoved himself between the speaker and me, and posed his question when it was my turn.

I was in no rush, and asked my question after the middle-aged man departed. But I immediately bumped up against another cultural habit: Chinese people in positions of authority do not like tough or direct questions.

I did not have time to explain that I had had lots of experience with the topic of my question. In both the United States and China, multiple traditional Chinese medicine doctors have promised my ailing father that they could defeat his Parkinson’s Disease, an illness deemed incurable by Western medicine. No Chinese medicine doctor has ever delivered. Once, a Chinese doctor in California declared she could beat the disease in one week and instructed my father to visit her for three separate treatments during that period. Each treatment required a three-to-four-hour round-trip car ride from his house. My father, a firm believer in Chinese medicine and a man desperate for a cure, showed up for the treatments. Afterwards, he still had Parkinson’s, but my mother, his driver to each treatment, suffered a mild heart attack and spent a couple of nights in the hospital.

At GW, my distinguished interlocutor responded that people needed to understand Chinese medicine better. Perhaps he was following the time honored Chinese tradition of offering vague answers to sound profound. More likely, he did not like my description of the more unsavory aspects of his profession.

I was not going to let him off the hook, so I pressed him for a better answer. To his credit, he acknowledged that his profession needed to set better standards and encourage more responsible practices. Recognizing that I was not going to extract more details, I thanked him and walked away.

On topics ranging from the proper diet to the body’s interaction with the seasons to the limitations of medicinal remedies, the Confucius Institute symposium on traditional Chinese medicine succeeded in bringing to one classroom in America sophisticated knowledge and understanding of a topic that is profoundly important to modern Chinese society and its cultural traditions.

Universities and educational institutions will each have to decide if a partnership with a Chinese-government entity undermines the academic values they prize. The Confucius Institute symposium at GW was chalk full of awkward political overtones and cultural incongruities. But if cultural exchanges can help participants become more informed (including about how better to ease the pain and suffering of loved ones), then they have accomplished at least one worthy purpose.

Ying Ma is the author of Chinese Girl in the Ghetto.