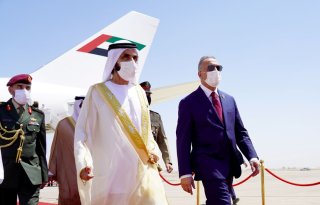 The Middle East appears to be in the mode for reconciliation. Regional rivals and foes are working to mend ties and restore relations. The Gulf crisis has seemingly been resolved with the Al Ula Summit. After almost a decade of hostility, Turkey and the United Arab Emirates (UAE) have engaged in a fast-paced rapprochement process. Similarly, there is a thaw in relations between the UAE and Iran. Normalization talks between Cairo and Ankara are ongoing while diplomacy between Ankara and Riyadh has picked up in recent months. Plus, no longer do the Arab Spring and political Islam, two major fault-lines of discord in the last decade, feature prominently on the regional agenda.

However, despite the flurry in diplomatic activity, no conflict in the region is close to resolution. The Gulf, Libya, Syria, Yemen, the Eastern Mediterranean, and the Horn of Africa remain geopolitical hotspots. Such contradictory developments raise two interrelated questions: What exactly is happening across the Middle East, and, more importantly, what is driving it?

Normalization and rapprochement have been widely invoked to account for the recent flurry in regional diplomacy. However, of the terms, de-escalation is better suited to describe the situation since the ongoing realignment is not the result of a new modus vivendi between regional powers. Rather, it is the consequence of actors revising their geopolitical posture because regional and international contexts favor de-escalation over conflict. In a sense, what we are observing is a temporary freezing of regional conflicts, rather than the successful outcome of genuine efforts to resolve them.

This de-escalation is being driven by a confluence of factors that have shifted the strategic priorities of regional powers, including the U.S. withdrawal together with the Biden administration’s approach to disputes in the Middle East, stalemates in various arenas of geopolitical competition, ideological exhaustion among rivals, and national economic imperatives.

First, the U.S. partial withdrawal from Syria and Iraq, complete withdrawal from Afghanistan, and unwillingness to take on more security responsibilities together with the pivot to the Indo-Pacific have led regional actors to rethink the cost of geopolitical instability. From their perspective, not only is the United States downsizing its security commitments, but it has also become an unpredictable partner. The clearest example of this is the Biden administration not taking sides in the confrontation between the Arab-Gulf states and Iran, a major shift from the Trump administration which wholeheartedly supported the anti-Iranian camp. Instead, this administration is pushing to revive the 2015 nuclear deal with Iran, with little success. These factors have pushed regional players to hedge their options, mend ties with rivals, and cultivate closer relations with other external powers like China and Russia.

To reflect this regional hedging strategy, almost all regional states are deepening their relations with Beijing and Moscow. China has considerably increased its share and role in the region’s economy and Russia in the region’s security. As the prospect of a great power competition between the United States and China, and Russia as well, looms large on the horizon, the Middle Eastern states’ deepening relations with Moscow and Beijing is set to become a major source of tension between them and the United States.

Second, in many conflict zones, stalemate has been the outcome. The Gulf Crisis of 2017 ended with no victor, but many losers. In Syria, the opposition has lost, but the regime has not won. Likewise, despite flare-ups in the Eastern Mediterranean between Turkey and a group of countries allied with Greece and Cyprus (France, Israel, Egypt, and the UAE) the conflict map has not changed in any meaningful manner. The sides could not agree on anything but temporarily refreezing the dispute. Similarly, Khalifa Haftar’s year-long military campaign to control Tripoli with support from Egypt and the UAE ended after Turkey and Russia agreed to a truce. This absence of a clear victory creates more ground for engagement and negotiation amongst the conflicting parties and their international backers.

Third, the region is experiencing ideological exhaustion, which in return has diminished the relevance and intensity of ideological battles that were prominent over the past decade. A decade after the Arab Spring uprisings, no one can claim a victory. In contrast, the list of losers is quite long. Political Islamist actors that were seen as the winner at the outset of the political transitions have later experienced setbacks and losses. From the Egyptian coup of 2013 to the tragic fate of the Syrian opposition morphing into mercenaries and the latest coup of Tunisia’s Kais Said against the parliament, Islamist parties have suffered major defeats.

Although the battle of ideas will not be the defining character of regional politics at the national level, elites and societies across the Middle East remain highly polarized especially in transitioning and conflict countries. In particular, the democracy-authoritarianism divide has become more pronounced with autocratic regimes becoming more repressive. In that sense, the Arab Spring-induced insecurity among autocrats has lessened, but it has not evaporated.

Fourth, geopolitics and ideology have dominated the regional agenda over the last decade. As a result, there has been a decoupling between the foreign policies and economic interests of regional rivals. After the collapse of oil prices in 2014, this gap took its toll on trade and investment cooperation between neighboring countries. The blockade of Qatar in 2017 was financially costly to everyone before the Covid-19 pandemic aggravated the strains and pushed the region into a steep recession. With continued uncertainty about the global economy, states have prioritized economic recovery including through restoring economic relations abroad. This dynamic is already visible in the Turkey-UAE relationship and their respective overtures to rivals. The economic nationalism that is increasingly shaping Saudi Arabia’s external relations could very well open the door for improving ties with rivals Turkey and Iran.

Despite all the talk of the region entering a post-Arab Spring era, from Lebanon to Algeria and Iraq to Sudan and Tunisia, public protests across the Middle East continue. These protests could heighten the insecurity of the authoritarian regimes and reignite ideological struggles. Frozen conflicts can be thawed in response to a host of triggers. A Trump-like figure could potentially be elected in 2024. Plus, as put by U.S. special envoy to Iran Rob Malley, the prospects of reviving the 2015 nuclear deal with Tehran are increasingly bleak. An escalating crisis with Iran could aggravate tensions in the Gulf with spillovers across the wider region.

To avoid a reversal in the ongoing de-escalation, international players should actively support regional actors through multilateral frameworks that solidify and make sustainable the benefits of cooperation over conflict. Initiatives like the Baghdad Conference for Co-operation and Partnership, held in August 2021 and with significant participation by regional leaders, should not be a one-off event. With U.S. support, it should be turned into a platform and process for a multi-stakeholder dialogue on the shared security and development challenges facing the Middle East today including terrorism, refugees, food security, and migration.

Galip Dalay is Richard von Weizsäcker Fellow at the Robert Bosch Academy and doctoral researcher at the University of Oxford.

Tarik Yousef is nonresident Senior Fellow in the Foreign Policy program at the Brookings Institution and former Director of the Brookings Doha Center.