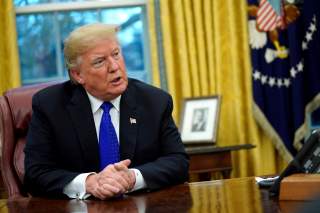 President Donald Trump recently suggested that the United States should start its own worldwide network in order, in his words, “to show the World the way we really are, GREAT!” The president may have been responding to CNN—the global news network that he blames for “portraying the United States in an unfair and false way”—but his suggestion touches upon a very real and pressing need for the United States to more proactively shape global public opinion in a way that expands American influence abroad.

The president, however, is overlooking that the United States already has a dedicated outreach arm, known as the U.S. Agency for Global Media, or USAGM (previously the U.S. Broadcasting Board of Governors). Today, the USAGM presides over a worldwide news network with multiple broadcast outlets, thousands of employees and a budget of nearly a billion dollars.

It is a bureaucracy with a storied history. The Voice of America (VOA), perhaps America's most prominent broadcast outlet, has been in operation since World War II and played an instrumental role in the defeat of communism and the end of the Cold War. Over the years, its efforts have been supplemented by television and radio channels that broadcast to Latin America (Radio Marti), the Middle East (Al-Hurra and Radio Sawa) and Asia (Radio Free Asia). Cumulatively, federal media outlets now reach an audience of over 270 million and do so in more than thirty languages.

President Trump, in other words, already has potent tools available to accomplish his new mission. But is this structure effective? Does it have influence? And does it advance U.S. policy and values? Here, the record is more mixed.

U.S. outreach was undoubtedly dominant during the Cold War, and served as key tool in countering Soviet propaganda and disinformation  But today, that influence—while still powerful in parts of the world—has been diluted by a surge of global news competition from outlets like the BBC, Russia Today, China’s CCTV, Saudi Arabia’s Al Arabiya and dozens of other competitors. Compounding the problem has been the rise of social media, with platforms like Facebook, Twitter and Telegram, as well as an army of bloggers, ushering in a new era of media saturation.

Now that U.S. broadcasting is just one voice in a maelstrom of information, the question of effectiveness has become critical—and that, in turn, requires a rethinking of how the United States carries out its outreach. To be effective no longer means simply having a mass audience. Instead, effectiveness is measured by whether your information is relevant and has value, because audiences trust a particular source and will make decisions based on the information it provides.

The question, then, is really whether U.S. information can be trusted. Such trust does not necessarily flow from a steady stream of good news. Global audiences have a complex and nuanced view of America that is only partially based on our political system—and even that is eroding, as studies show declining global admiration of U.S. institutions.

Rather, trust today is built on the value and utility of the information provided to audiences. The United States has a unique history and appeal—attributes which endure to this day. Today, admiration is not grounded in political heroes or celebrities, but on America’s dynamism in enabling entrepreneurs, supporting innovation, and expanding individual empowerment, freedom of expression and association. As a result, U.S. information is most influential when audiences can draw a direct correlation between our values, ideas and products, and concrete improvements in their lives.

Given this reality, the United States would be best served not by the creation of a wholly new global media network, but by real reform of the existing one. The Trump administration is already weighing reform, but it could go further to recognize what has become a historic inflection point in how the U.S. engages audiences. A further definition of roles within USAGM and higher quality standards at the VOA are important, but there is now an opportunity for truly sweeping change—change designed to transform American broadcasting into an agile, streamlined, digital-first media platform that is organized to engage and empower key audiences no matter where they live.

Rather than building a new bureaucracy, President Trump should work to optimize the one we already have to better communicate America's greatness.