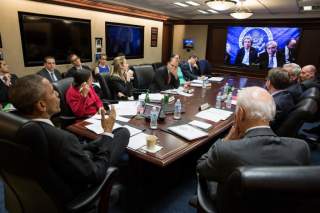 Basketball teams of unexceptional gifts don’t even get a ticket to the dance. This year, three of the teams advancing to the NCAA Final Four were No. 1 seeds in their regions. No surprise there.

Talent matters. That holds true in foreign policy, as well as in sports. So there should be no surprise when a mediocre national-security squad suffers a string of foreign-policy setbacks. Top-rank talent may not guarantee any administration an unbroken winning streak in foreign policy, but it sure improves the odds.

So what should the nation’s next president be looking for when assembling his or her national-security team?

Start with Talent, Not Programs

Managing complicated foreign-policy conundrums requires talented people with insight and wisdom. They need to be skilled decision makers and effective leaders. Such people can be found in government. Unfortunately, government rarely empowers the right people at the right time.

If a president seeks to improve foreign-policy outcomes, simply rearranging the rusty chains that bind our national-security apparatus together does little to help. Jimmy Carter was one president who learned this lesson the hard way.

One of Carter’s campaign promises was that he would exercise better oversight of our foreign-policy machinery. In Jimmy Carter: In Search of the Great White House (1980), Betty Glad documents Carter’s belief that the National Security Council Staff was out of control—an all-powerful cabal undercutting leadership from the top, but at the same time bureaucratic, burdensome and slow moving. Once in the Oval Office, he scrapped existing NSC processes, reorganized and downsized.

For all the rearranging, the Carter “system” didn’t produce better policy outcomes. A string of foreign-affairs debacles, like the botched decision to withdraw U.S. forces from South Korea, raised questions about the soundness of the president and his national-security team.

To manage mayhem, the first and most critical task for a new president is to pick the right people for his team.

The qualifications for any job are a mix of skills, knowledge and attributes. Being an effective strategic leader requires three core characteristics: character, competence and critical thinking.

A Core of Character

The most vital attribute for a top national-security leader is character. Strategic leaders are people of character—leaders who do things for the right reasons.

Complicated problems give rise to a variety of probable solutions, each with its own rationale. Leaders of character put priorities in perspective and keep them in order. While they recognize that multiple priorities must be addressed, they make sure that lesser concerns don’t compromise higher values.

The top priority is always what is in the best of the nation—not the administration, any particular agency, political party or other constituency.

As a second priority, leaders must decide what is in the administration’s best interest. After all if a White House isn’t powerful and successful, it is hard to get anything done.

Third, leaders have to account for what is best for their subordinates and their supporting constituents. Staff and constituents are most motivated to help deliver on a president’s agenda when they feel they are valued and what they do is valuable. Accounting for their interests is important.

Leaders often go wrong by sliding into a twisted-pretzel logic that shifts and inverts these priorities. What’s good for the White House is not always what’s best for the country. Similarly, a team member’s drive to succeed in his or her role should not get in the way of other, more important initiatives. It takes the courage of real character to stay on course.

Harry Truman had to make some of the toughest foreign-policy calls of the modern era, decisions that may have short-circuited his chances for another presidential term. After deciding to fight back in Korea, Truman committed a series of blunders and miscalculations—from the decision not to pursue a declaration of war to mismanaging MacArthur. His popularity plummeted.

Despite the calamities, writes historian Robert Ferrell in his biography of the president, “It was impossible to redeem the errors of the past, but it was possible to make the right decisions for the future.” Truman steered a steady course between widening the conflict and abandoning South Korea, leaving the next president a salvageable situation. Throughout his trials, with great personal effort and integrity, Truman managed to keep the needs of the nation first in his priorities. Consequently, he made the most of the final years of his tumultuous presidency.

Leaders need to be competent in their subject area. They don’t need to know everything, but they have to know what they do know, what they don’t and how to cover the gaps by gaining credible, relevant information and assimilating it effectively. The best national-security professionals are leaders who “know themselves,” understand their own strengths and weakness and know how to best fill the gaps.

There are few better examples of high-level competence in national security than the launch of the Strategic Defense Initiative. Missile Defense was one area where Reagan second-guessed his own policy team. He educated himself enough on the issue to recognize the potential to introduce a game-changer into the strategic competition with the Soviet Union. Then, writes Paul Lettow in Ronald Reagan and His Quest to Abolish Nuclear Weapons (2005), the president began to dig deeper, “acquiring support for the general idea of a missile defense effort from elements of the bureaucracy whose backing and technological assessment he thought he needed to proceed, particularly the NSC staff and the Joint Chiefs of Staff.” Reagan’s effort was a perfect example of blending knowing and learning to achieve an extraordinary policy accomplishment.

If there is one “skill” prized more than any other in a top security team, it is the capacity for critical thinking that leads to solid professional judgments.

Leaders come to the top ranks of national security through many paths—lawyers, doctors, soldiers, scientists and politicians, to name a few. Each profession teaches its own particular way of thinking through tough problems. None is sufficient preparation for the jobs at the top. Not all kinds of problems are the same. Decision makers need to adapt an analytical framework that’s appropriate for the problem—not the other way around.

A resume alone is no predictor of success. Effective national-security leaders rise above their parochial backgrounds and personal preferences, demonstrating the capacity for critical thinking at a higher level. Not all leaders can do that.

Critical thinking becomes sound judgment when leaders show the capacity to make sound assessments based on available evidence, and the ability to make timely decisions and follow through on them to produce right actions. In a study of the run-up to NATO’s intervention in Bosnia, Vicki J. Rast details how President Bill Clinton’s administration suffered from paralysis by analysis. The failed 1993 U.S. intervention in Somalia haunted the president’s team. With the “Somalia Syndrome” weighing heavily on their minds, the White House struggled with the decision to commit forces to another intervention with an uncertain outcome. They “over-thought” and dithered while the crisis spun out of control, and once viable options were overcome by events. Critical thinking is not an excuse for inaction—it is a prelude to correct, decisive action.

Pulling the Team Together

Having a strategic leadership team armed with critical thinking, competence and character is a great start. But the members must be able to function as team. And calling a team “a team,” doesn’t make it so.

President Carter paired his process reforms with what he envisioned as a “team approach” for managing foreign affairs: a troika of National Security Advisor Zbigniew Brzezinski, Secretary of State Cyrus Vance and Defense Secretary Harold Brown. Each was a knowledgeable professional, but the cranky triumvirate didn’t work well together. Vance and Brzezinski, for example, had bitter disagreements over issues like the strategic arms talks with the Soviets.

The problem of grumpy talent is bipartisan. Ronald Reagan had his hands full with bickering between his State and Defense secretaries. For instance, the road to the Iran-Contra scandal started, writes Alex Douville, because “Reagan did not have the confidence to mediate between his two feuding Cabinet secretaries, Secretary of Defense [Casper] Weinberger and Secretary of State [George] Schulz.” Divisive leaders undercut one another and the president.

On the other hand, “groupthink” doesn’t help, either. No White House is served well by coveys of “yes” voices. Eisenhower wanted his national-security team to work like a team, but he also wanted to hear honest feedback and a variety of views. Franklin Roosevelt intentionally recruited a fractious war cabinet—and proved a master at moderating the “creative” chaos he created. Capable leaders know how to stage-manage a “lively” staff—but it starts with having the right team to work with.

Real teams share trust and confidence, respect each other’s equities and can—as a group—properly put their priorities in order.

From the very start of the next administration, the president will need to focus on the subordinate relationships that are key to managing mayhem. In recruiting his team, the president needs to pay close attention to the personal qualities and dynamics among these key groupings: