Is Manila Worth American Lives? 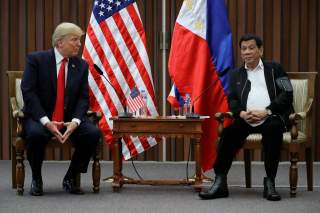 The contested territories, rocks in the case of Scarborough Shoal, matter even less. Ownership offers control of resources, most notably fisheries and hydrocarbons. The extra-national wealth would be useful, but hardly worth full-scale war. Who owns what is a matter that America can largely view with indifference. Perhaps Washington should backstop the independence of friendly nations, but that is very different than defending a gaggle of subsidiary interests.

Nevertheless, the Obama administration increased military ties with Manila, signing the “Enhanced Defense Cooperation Agreement” in 2014. U.S. combat forces aided the Filipino military in battling Islamist insurgents. The Philippines requested logistical aid for forces confronting the Chinese military in the South China Sea. Washington increased the number of exercises and other military activities, and rotated surveillance aircraft through the Philippines. The U.S. also transferred equipment and provided grants, including for construction of facilities expected to eventually house American forces. Defense consultant Jose Antonio Custodio cited “an obvious bending” of the law, adding that, “The U.S. and Philippine governments have always found ways to liberally interpret the provisions of the existing agreements.”

If there was one administration likely to change U.S. policy, it would seem to be the current one. Almost unique among American presidents, Donald Trump maintained a bitter and extended rhetorical attack on the United States as the international chump. Nervous foreign diplomats from allied states ask me if he is serious about demanding higher host nation support and even withdrawing troops.

Yet earlier this year Secretary of State Mike Pompeo warned Beijing against even looking harshly at Manila, lest war with America result. He declared: “Any armed attack on Philippine forces, aircraft or public vessels in the South China Sea will trigger mutual defense obligations.” Philippine Foreign Secretary Teodoro Locsin Jr. generously said his government would accept America’s word, which he interpreted to mean “we have your back.” The U.S. and Philippines also have a dozen projects set under the EDCA, as well as nearly three hundred other joint military activities scheduled this year.

Where is the “mutual” in this relationship? Someday Manila might allow the prepositioning of equipment which might be useful in contingencies elsewhere, but Washington has no shortage of bases in the region. If the U.S. ends up at war in Korea, fighting China over Taiwan, or defending Japan’s claim to the Senkaku (Diaoyu to the PRC) Islands, will Manila join in? If so, with what? Its naval flagship is a half-century-old American Coast Guard cast-off. The Philippines is not arming to deter and defeat Beijing. The Philippines is whining to get America to deter and defeat Beijing.

The greatest heat is generated by the battle over two rocks called Scarborough Shoal (Panatag Shoal to the Philippines and Huangyan Islets to China). Originally administered by Manila, the territory was seized by the PRC seven years ago. Also contested is Mischief Reef, on which Beijing has constructed military facilities despite its location within the Filipino Exclusive Economic Zone. And these are not the only territories in dispute in the region. China and Japan are battling over the Senkaku/Diaoyu Islands, Japan and the Republic of Korea are squabbling over the Liancourt Rocks (Dokdo/Takeshima Islands to the PRC and ROK, respectively). Finally, Brunei, China, Malaysia, Taiwan, and Vietnam variously claim ownership of the Paracel and Spratly Islands. The specifics of each case vary, but collectively such territorial claims have inflamed nationalistic sentiments in many nations.

Until Pompeo’s gratuitous statement, Washington had been cautious in its expressions of support, generally speaking more action taken by unnamed parties in the Pacific. After all, there is nothing at stake that justifies America making Manila’s contested claim essentially its own. And doing so inevitably creates bad incentives. The Duterte government has less reason to invest more in the military. It can confidently be more reckless and assertive. And thereby—intentionally or not—might pull the U.S. into a war with nuclear-armed China over an issue of no importance to Americans.

Indeed, in March Philippine Defense Secretary Delfin Lorenzana announced that if the Trump administration did not clarify Scarborough Shoal status under the “Mutual” Defense Treaty, Manila might end the alliance relationship. Lorenzana explained that “It is not the lack of reassurance that worries me. It is being involved in a war that we do not seek and do not want.” He added that “If the Philippines does not want to be involved in a war, it can opt out on that basis.”

If Manila doesn’t believe the contested territories are worth war, then why should the U.S. believe so? Far better for the Philippines to expand its defense relationship with other parties. Indeed, three years ago at Manila’s request, Tokyo transferred two coast guard ships to the Philippines. India and Vietnam also could do much more to assist the Duterte government.

A separate issue of interest to Washington in East Asian waters is freedom of navigation. However, that doesn’t warrant intervening in often convoluted territorial arguments. The U.S. has mounted Freedom of Navigation Operations, or FONOPS, operations in waters claimed by Beijing. Observed Pompeo: “I think the whole world understands that the Trump administration has made a true commitment to making sure that these seas remain open for the security of the countries in the region and the world, open to commercial transit.”

Sovereignty questions are not paramount for navigation. Even in EEZ or territorial waters, international law recognizes a general right to transit freely. Nor is the PRC likely to end commerce which has benefited it and most everyone in the region. It would be different in wartime, but then all that would matter would be the respective navies’ fighting capabilities.

How much naval power America needs to protect its interests is a matter of contention. Earlier this year author Mark Helprin complained that Washington must “alter the correlation of military forces in the Western Pacific, and indeed in the world, so that it no longer moves rapidly and inevitably in China’s favor.” If not, he warned, “the Pacific Coast of the United States will eventually look out upon a Chinese lake.”

In fact, Beijing’s ability to operate along America’s west coast will be even more limited than Washington’s ability to operate along the PRC’s east coast. Nor have the Chinese demonstrated much interest in doing so, if for no other reason than projecting power in that way would be so expensive. China lacks nearby bases and the U.S. could load up the mainland with plenty of ship-killing missiles.

And if Helprin or anyone else seriously believe that America’s Pacific Coast might be at risk, then it would be better to concentrate resources and money on defending the American homeland than the Filipino islands. Defeating ever-growing Chinese forces so close to their home would require an expensive, exhausting, and permanent military expansion. One the PRC would have every incentive to match.

The Philippines might be a nice place to visit. But it isn’t a nation whose security America should guarantee. The United States certainly shouldn’t protect Manila’s sovereignty over territories which the latter is unable to defend. Nor to let the authoritarian ruler of a decrepit government of peripheral interest to America decide when Washington should go to war.

The PRC is likely to pose the greatest challenge to the United States in the coming years. It is in Washington’s, as well as Beijing’s interest to keep that competition as peaceful as possible. America should not go to war for anything short of fundamental, even vital interests. None are at stake in the Philippines, let alone Scarborough Reef.

Doug Bandow is a Senior Fellow at the Cato Institute. He is a former Special Assistant to President Ronald Reagan and the author of several books, including The Politics of Plunder: Misgovernment in Washington.