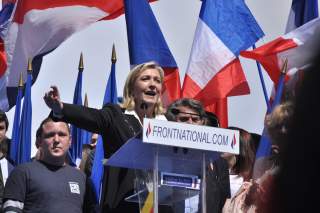 Think of François Fillon as a more polished and experienced Ted Cruz. He might have been president of France until everything came crashing down.

Fillon is a former French prime minister and admirer of Margaret Thatcher whose libertarian-influenced agenda includes a pledge to ax half a million civil service jobs. He was initially dismissed as an also-ran in the center-right Les Républicains presidential primary, up against the seasoned Nicolas Sarkozy and the moderate Alain Juppé. Instead, Fillon thrashed them both, and polls showed him an early favorite for the French presidency, backed by energized conservatives and the Catholic Right. Eschewing first-past-the-post, France holds a runoff election between its top two finishing presidential candidates if neither secures a majority, and forecasts last year showed the finalists would be Fillon and the National Front’s Marine Le Pen. It was to be a rumble on the right, and Fillon was predicted to win in a rout as French leftists and centrists clothespinned their noses and voted to block the radioactive Le Pen.

Or at least, that’s what was supposed to happen. Instead, Fillon was quickly submerged in controversy as it came out that he’d funneled 900,000 euros in public money to his family, a scandal that became known as “Penelopegate” after his implicated wife. An investigation was launched and Fillon’s poll numbers sagged into third place, drawing an intervention from the omnipresent Sarkozy and whispers that Juppé might take over as nominee. But Juppé ultimately declined to run, cognizant of being a moderate beached in a year of fury, and Fillon remained defiant. He would only step down, an aide said, if a planned rally last Sunday turned out to be a dud. Lo and behold, tens of thousands of conservative faithful turned out, and he limped onwards.

France’s political dichotomy has thus been plunged into the unknown. The major parties are sidelined for now, with Fillon a boulder on the back of the center-Right Républicains and the center-Left Parti Socialiste floundering under the stewardship of detested current president François Hollande who is not standing for reelection. Amidst all this, the polling service Oxoda now finds Le Pen running neck-in-neck with another candidate, Emmanuel Macron, an independent whose En Marche! movement is serving as an outlet for the forlorn political center. Macron is a novelty in French politics: an investment banker who was appointed economic minister at the age of thirty seven and who’s still never been elected to public office in his life. He has a youthful charisma that this cliché-deploring writer only reluctantly describes as “Kennedyesque” and his rallies have grown exponentially in size since he entered the race.

The 2016 presidential election in the United States embodied the old versus the new, with Hillary Clinton the conventional and choreographed handmaiden of our hoary political consensus and Donald Trump the populist stick of TNT primed to blow underneath. Assuming present trends hold, the French election this April will be one step advanced, leapfrogging over the mainstream parties entirely and pitting against each other the two flavors of reform that are most likely to dominate Western politics in the years to come. Neither Macron nor Le Pen believes France can continue on its current track and both are proposing ambitious overhauls to the French social contract. After a year that’s seen economic stagnation and rowdy strikes, protests targeting abusive cops and demonstrations against immigration, terrorist attacks, soccer riots, and the southward seeping shock of Brexit, the only thing certain in France is that much has to change.

Le Pen’s appeal is obvious. She’s the Gallic Trump, France’s vessel for the West’s recent flirtation with populism. Head of the Front National, which had long been dismissed as bigoted until she vigorously resuscitated it and expelled its former leader and her father Jean-Marie Le Pen, she’s successfully blended anti-immigrant and anti-Islamic politics with a dedication to the welfare state that isn’t shared by more established French conservatives like Fillon. The nut of her message is that French institutions, benefits, handouts, society, all of it, ought to be reserved for the French and not its newcomers. Because the European Union stands for the globalism and multiculturalism she abhors, she energetically backed Brexit and has promised to hold a referendum on France’s membership in the EU.

The parallels between her candidacy and the Trump Train are undeniable: French voters shrugging that they’ve tried everything else so may as well take a gamble on the neophyte, blue-collar workers ditching the socialists after decades of perceived neglect, immigration as a political keystone joining Left and Right in fury wrought from economic pain. In northeastern France, industrial workers battered by globalization and the shuttering of their blast furnaces—“cathedrals” they call them—are breaking for Le Pen. In the rural middle, farmers, their livelihoods buttressed by Brussels, are stomaching Le Pen’s anti-EU rhetoric in favor of her promise to displace their loathed political class. The cultural flashpoints touted by the Front National—like its pledge to ban the chaste “burqini” swimwear popular among Muslims; “France isn’t burqinis on the beach. France is Brigitte Bardot,” Le Pen told CBS News—have real resonance with both demographics.

Like Le Pen, Macron is also determined to discomfit the French political establishment, which he views as quiescent and self-serving, and he too repudiates traditional party labels, defining himself as “neither left nor right.” But once you place him off the traditional political grid, it becomes evident he’s Le Pen’s antithesis in nearly every other way. He’s a devotee of Europe who believes the solution to the EU’s woes is reform rather than the scrap heap. He advocates for refugees whom he says present an “economic opportunity” and have “remarkable qualifications.” He espouses that inchoate mixture of social liberalism and economic liberalization with which many young people functionally identify. He understands that France’s overregulated and hamstrung economy can’t continue to function as is. He warned President Hollande that a proposed 75 percent tax on millionaires would turn France into “Cuba without the sun.”

The Le Pen-Macron dichotomy, which in many ways runs orthogonal to traditional Left and Right, is far more representative of where the peoples of the West are right now than the mainstream party duopoly. The issues are many. Do economies function better open or half-closed? Is a job something portable and ephemeral or is it a singular and sturdy column of well-being rooted in place? Can the globalization genie be put back in the bottle? Are we citizens of nations or citizens of nations and the world? Should our cardinal civic virtue be tolerance or patriotism? Le Pen’s and Macron’s answers to those questions, splayed on their respective platforms, could not be more diametrically opposed.

France is thus a microcosm of the present, fraught, unsteady Western world, and her election could be a dress rehearsal for our coming political realignment. The conjecture on the lips of European elites is whether Le Pen, whose brand of disruption is far greater anathema to them than Macron’s, can win the presidency. Conventional wisdom dictates that this won’t happen, that Macron will crush Le Pen in the runoff election, flush with support from Socialistes and Républicains determined to obstruct the Front National. But don’t be so certain. Portents were to be found at that Fillon rally last weekend where, amidst pouring rain and wind, conservative activists brimmed with tea party-esque rage towards their own party grandees. “If Fillon is out,” one demonstrator warned, “many of us will vote extreme, I am convinced.” If Le Pen can shepherd those disgruntled Républicains foot soldiers into her fold for the runoff, her chances will improve significantly.

Of course, the polls show . . . but who really cares what the polls show? They failed to register the last two nationalist tremors and it’s entirely possible they’re about to miss another one.