The Maritime History of a War Weary Naval Fleet 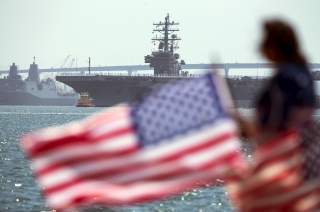 I like John Lehman’s new book Oceans Ventured: Winning the Cold War at Sea. It reminds me of how I won the Cold War with a little help from a few of you slackers.

Well, I may have had a little more help than that. After all, I was a dissolute high-schooler for part of the interlude Lehman retells, which roughly spans from 1980 to 1991—then a dissolute college kid, and then a dissolute surface-warfare officer in training. But I made my way onto the wine-dark sea in time for the Cold War’s endgame!

The author served as President Ronald Reagan’s secretary of the navy from 1981 to 1987. Alongside Chief of Naval Operations James Watkins, he was the principal architect of the Reagan administration’s aggressive new Maritime Strategy. Lehman’s book Command of the Seas set forth the rationale for an offensive-minded strategy many years ago; Oceans Ventured: Winning the Cold War at Sea recounts the operational details of how the U.S. Navy and Marine Corps put the strategy into effect in concert with fellow U.S. armed services and treaty allies. There’s much here for today’s naval magnates to ponder as they try to help the U.S. Navy regain its competitive footing vis-à-vis near-peer opponents such as the Russian Navy and China’s People’s Liberation Army Navy.

If there were a one-liner that sums up the Lehman/Watkins strategy—adopted in classified form by 1982 and made public in the U.S. Naval Institute’s Proceedings in 1986—it might be this: no more passive defense. This marked a significant turnabout from the 1970s. Secretary Lehman rightly points out that the U.S. Navy was a spent force coming out of the Vietnam War. It degenerated into a “hollow” force at the same time the Soviet Navy went on the march under the tutelage of its founding father, Fleet Adm. Sergei Gorshkov. Hollow forces tend to assume a defensive crouch vis-à-vis rival pugilists rather than compete with derring-do. And indeed, U.S. and allied navies more or less wrote off northern waters as a Soviet naval preserve. They were a Soviet sanctuary or “bastion” where ballistic-missile submarines could shelter.

The American naval establishment transcribed this reticent mindset—Lehman brands it a “Maginot Line” mentality, and this is no compliment—into operations. In the Atlantic Ocean the NATO allies rigged a barricade across the “G-I-UK gap”—the waters separating Greenland from Iceland and Iceland from the United Kingdom—in hopes of confining Soviet surface forces and especially attack submarines to the icy waters off Eastern Bloc shores. Engineers strewed acoustic sensors along the seafloor while NATO antisubmarine forces arrayed themselves behind the line in hopes of tailing and, in wartime, sinking Soviet units that crossed the G-I-UK picket line into the North Atlantic. If they succeeded, Western surface traffic could lumber across the ocean unmolested.

Meanwhile Western navies planned to form convoys to escort transports carrying manpower and war materiel across the Atlantic to Western Europe to help beat back a Soviet ground offensive into West Germany. Convoys, too, fall into the category of passive defense. Escort vessels await attack and then try to fight off the predators when they appear. The passive approach can work. Convoy strategies sufficed for Great Britain during the Napoleonic Wars and for the Allies during the world wars. But they do surrender the initiative to entrepreneurial foes, who enjoy the liberty to choose the time and place of battle. Moreover, navies built for convoy duty tend to be made up of large numbers of lightly armed combatant ships optimized for antisubmarine warfare. These are not forces that can wrest command of the sea from antagonists that deploy warships bristling with heavy armaments and back them up with land-based air power.

This was a glaring flaw in Western fleet design during the 1970s. A navy must win command before it can exercise command, using the sea as a thoroughfare for military and commercial shipping. Yet the passive approach appeals to navies that find themselves floundering owing to budgetary woes, recruiting shortfalls, or other troubles. It is—or appears to be—a way to skirt the economics of sea power when times are tight.

As the Center for Analyses noted in 1996, material and human maladies afflict a hollow force like the 1970s U.S. Navy. Its ships fall short of their design potential. Maintenance problems hobble its endeavors. “Poor quality sailors seem the rule,” while “meaningful training is both scarce and questionable.” Laments CNA, the U.S. Navy endured “all of these problems and more” during the 1970s and early 1980s. Such woes sapped American strength while imprinting defensive habits of mind and deed on a sea service that historically thrived on carrying the fight to distant foes in their own waters.

In short, the Maritime Strategy represented an effort to rebuild U.S. naval power and notify the world that the enterprising U.S. Navy of old was back. It announced that new ships and weapons would join the naval inventory. It changed the tone, rejuvenating morale in the ranks. And it called for arraying that newly resuscitated sea power around the Soviet periphery. Deploying a spread offense at sea, believed naval officialdom, would siphon Soviet military resources from the central land theater in Western Europe.

Meanwhile, mounting northerly offensive operations would alleviate the menace to convoys making their way from North America to Europe. Soviet attack submarines would retreat to marine bastions in marginal seas around the Warsaw Pact periphery, there to guard ballistic-missile submarines—the Soviet Union’s undersea nuclear deterrent—from NATO attack. In short, the U.S. Navy and its allies would seize the offensive, radiating power onto Eurasian shores while forcing the Soviet Navy into passive defense. Secretary Lehman and Admiral Watkins sought to engineer a strategic role reversal.

The point: to fortify conventional deterrence. Lehman estimates that the Reagan administration restored 90 percent of American deterrence during its first year in office. It commenced revivifying the material dimension. Augmenting defense budgets made resources available to procure new weaponry developed during the lean years of the 1970s. The Aegis combat system, Tomahawk cruise missiles, and Los Angeles-class nuclear attack boats were only some new weapon systems and platforms inaugurated into the fleet during the 1980s. And the administration issued a statement of strategic purpose by instituting a series of exercises in the high north. Hence the book’s name—a play on Ocean Venture 1981, which dispatched an eighty-three-ship NATO fleet to the northern ramparts of Scandinavia. Says Lehman, the maneuver sounded the Maritime Strategy’s “first thunderclap.” Increasingly ambitious exercises followed in the Atlantic, Mediterranean Sea, and Pacific in ensuing years.

Some years later Vice Adm. Hank Mustin encapsulated the strategy’s principles in his fighting instructions to the NATO Striking Fleet. Stripped to its essence, the Maritime Strategy enjoined naval commanders to fight far forward, arrive at scenes of battle early, harness geography and terrain for operational and strategic advantage, and deploy joint and allied combat power to win a decisive victory at sea. Display the capability to do that effectively and a sense of encirclement would haunt the Soviet leadership. Naval operations would convince Moscow, each day, that today was not the day to roll the iron dice in the Fulda Gap. By the late 1980s beleaguered Soviet leaders took to presenting their Western counterparts with maps depicting the Soviet Union surrounded by American and allied naval forces. They pleaded for clemency during East-West meetings relating to arms control, but to little avail.

In John Lehman’s telling 1986 amounted to a year of miracles. During exercise Ocean Safari 1986 the NATO Striking Fleet demonstrated its capacity to stage carrier flight operations within Norwegian fjords, using terrain, deceptive measures, and stringent controls on electromagnetic emissions to help carriers mask their whereabouts and evade attack while lofting warplanes into Soviet airspace. After digesting what surveillance planes and ships had observed, the Soviet military leadership informed its political masters that they must triple the budget for the Soviet Northern Fleet and supporting air forces. Otherwise they courted defeat in their own backyard. Yet a vast budget boost was a nonstarter in light of the sputtering Soviet economy. From then on Moscow became increasingly pliant as strategic competition became increasingly unaffordable. Strategic and fiscal realities drove the Soviet leadership past a psychological culminating point.

And that’s the gist of Oceans Ventured: Winning the Cold War at Sea. Let’s survey a few nuggets from the book that appear especially pertinent to today’s world—a rough counterpart to the world in 1980. The following themes stood out in no particular order: first, being fun-loving is an underrated habit for strategists and operators. Secretary Lehman shows every sign of having been a happy warrior while overseeing the naval service. (Talk to him in person and he seems that way to this day.) He reports flying out to aircraft carriers riding the waves, tagging along on simulated combat missions, and otherwise taking a direct hand in fleet maneuvers. Doughty warriors need not be grim of spirit. In fact, Lehman seemingly took delight in trolling the Soviet leadership with his Maritime Strategy and the shiny new implements the U.S. Navy and Marine Corps fielded to execute it. That madcap attitude is worth cultivating. Let’s troll China, Russia, and Iran early and often.