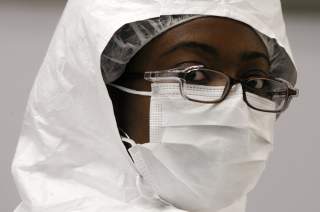 The Trump administration and House Republicans have proposed a hard-power focus. However, it is important to diversify our toolbox in advancing U.S. influence abroad, rather than solely doubling down on the military instrument at the expense of other valuable means. Robert Gates, secretary of defense under both George W. Bush and Barack Obama, has observed:

“We must focus our energies beyond the guns and steel of the military, beyond just our brave soldiers, sailors, Marines, and airmen. . . . [B]ased on my experience serving seven presidents, as a former director of CIA and now as secretary of defense, I am here to make the case for strengthening our capacity to use ‘soft’ power and for better integrating it with ‘hard’ power.”

Disproportionately relying on military power and investments leaves chips on the table unused. Supporting global health security and development advances American interests and influence as well, and should as such be prioritized.

INVESTING IN global health is not solely an avenue to reinforce the virtuous identity of our nation, but generates tangible positive returns. Such returns include the safety of American citizens at home and abroad—as the highly dynamic nature of infectious diseases necessitates. With such investments, we can strengthen our relationships with economic, diplomatic and strategic partners while simultaneously contributing to sustainable productivity for those countries and our own.

Managing epidemics requires the United States to sustain efficacious bilateral programs such as PEPFAR, PM and USAID’s TB program. Backing collective instruments such as the Global Fund—which is responsible for supporting 47 percent of HIV treatment, 65 percent of malaria treatment and 84 percent of TB detection and treatment worldwide—is smart foreign policy. Whereas intergovernmental organizations like the United Nations and World Bank have had a mixed track record at best, by design and in practice the Global Fund has been accountable, inclusive of civil-society voices, and able to mobilize companies and foundations’ resources and know-how. It has also evolved and innovated where needed. Since 2015, assessments of multilateral aid agencies promulgated by the governments of United Kingdom, Australia and the Netherlands, and two reputable nongovernmental watchdogs—the Multilateral Organization Performance Assessment Network and PublishWhatYouFund—have given the Global Fund high marks. Its purpose, impact and model (where the UN, or some partnerships that are triumphs of form over substance, fall down) are precisely what the United States should advance.

In regard to infectious diseases, global prosperity and security are only as strong as their weakest links. Warfare and violence on the one hand, and flimsy, corrupt or brutal governments on the other, are not the only weak links affecting our vital interests. Without proper surveillance, prevention measures and treatment programs, disease outbreaks will cross international borders. Without U.S. leadership on global health, we squander past investments that have demonstrated through hard numbers their big impact, economic value and opportunities to reap the single, most successful area of “soft power” influence in the last two decades. The stakes are anything but low.

Mark P. Lagon is chief policy officer of the Friends of the Global Fight Against AIDS, Tuberculosis and Malaria, and distinguished senior scholar at the Walsh School of Foreign Service at Georgetown University. He served as ambassador-at-large to Combat Trafficking in Persons at the Department of State, 2007–09. He thanks Sydney Spencer of George Washington University for her research contribution to this essay.

Image: A worker is seen in the mosquito formulation and vialing room at Sanaria Inc. facility in Rockville, Maryland, October 26, 2007. The insects in the facility are dissected for the motherlode that they carry -- baby malaria parasites, with which founder and chief executive officer Dr. Stephen Hoffman hopes he can do what has been impossible -- make a vaccine against malaria. REUTERS/Jim Young (UNITED STATES)