Mattis Could Resolve the Israeli-Palestinian Conflict 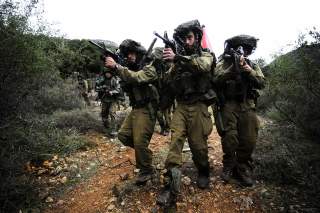 America’s forty-fifth president has indicated on more than one occasion that he would like to see his son-in-law and trusted advisor, Jared Kushner, negotiate a resolution of the Palestinian-Israeli conflict—a deal that has eluded all of his predecessors. While there is no reason to doubt Kushner’s abilities, President Trump might consider the importance of involving another member of his team—Secretary of Defense James Mattis—if the history of the failed efforts to resolve the conflict is to be defied.

Here is why: first, in a July 2013 Aspen Security Forum, Mattis—who was a retired U.S. Marine Corps general at the time—correctly identified the imperative and America’s national interest in addressing it. He explained why resolving the conflict was critically important for Israel. Mattis assessed that the current situation was “unsustainable” and that settlements in the West Bank were obstructing the possibility of a two-state outcome between Israelis and Palestinians. “It’s got to be directly addressed,” he said. “We have got to find a way to make the two-state solution that Democrat and Republican administrations have supported.”

Mattis further observed that if Israel continued to expand its settlement presence, then it would put its long-term character as a Jewish and democratic state at risk and possibly become an apartheid state. He then proceeded to explain why addressing the Palestinian-Israeli conflict was also important to U.S. national interest. “I paid a military security price every day as the commander of CENTCOM because the Americans were seen as biased in support of Israel,” he said, “and that moderates all the moderate Arabs who want to be with us, because they can’t come out publicly in support of people who don’t show respect for the Arab Palestinians.”

The second reason why Mattis is uniquely positioned to address the Palestinian-Israeli problem is this: he is now in charge of the most important realm that has paralyzed the Israeli side of the required peacemaking effort—the security realm. Security was not and is not the most difficult issue dividing Israelis and Palestinians, but for Israelis it is the most important one. Why? Most Israelis who are at the center and center-left of their country’s political map do not push their government to resolve the conflict because they are terrified. Why? Because implicitly, if not explicitly, even they—let alone those on the right and center-right of the map—accept the assertion that all concessions that Israel has made in the past two decades have placed them in greater jeopardy. They see the 1993 Oslo Accords as having resulted in the murderous 2000–2005 second Palestinian Intifada. They see the May 2000 withdrawal from South Lebanon as having led to the 2006 Second Lebanon War. Additionally, they see the summer 2005 withdrawal from Gaza as having already led to three military confrontations with Hamas.

Moreover, most Israelis accept the proposition that to enable the creation of a Palestinian state, Israel would have to withdraw from the West Bank. If the withdrawal results in consequences similar to Israel’s previous withdrawals from South Lebanon and Gaza, then the ramifications of such a withdrawal would be far worse for Israel’s safety and security. Why? Because in contrast to South Lebanon and Gaza, the West Bank is adjacent to Israel’s center core, which is where 80 percent of its population resides. The majority percentage of Israel’s GDP is also produced in that area.

Mattis is now in a position to initiate a security dialogue with his counterpart in Israel and to preside over a parallel dialogue between the Joint Chiefs of Staff—as well as the Israel Defense Forces general staff—on how to secure Israel under conditions that would allow the implementation of a two-state solution to the conflict. In the history of the increasingly intimate U.S.-Israeli defense relationship, this important issue never became part of the conversation. Indeed, during the last attempt to resolve the conflict (the negotiations launched by former Secretary of State John Kerry in 2013) the IDF was blocked from engaging retired Gen. John Allen, then senior advisor to the secretary of defense.

While Israel alone would judge what risks it can take for the sake of peace, the separation between this critically important issue and all other dimensions of U.S.-Israeli defense cooperation never made sense. The lack of resolution of the Israeli-Palestinian conflict affects Israeli security and the interest of the United States. Hence, finding a way to resolve the conflict without jeopardizing Israel’s security should become an important dimension of the defense dialogue between the two countries. Mattis is now in a position to make sure this happens.

The third reason why Mattis is uniquely positioned to help resolve the conflict is that the Trump administration’s most effective partner may be Mattis’s Israeli counterpart, Minister of Defense Avigdor Lieberman. In a January 22 meeting in Jerusalem with former CENTCOM commander David Petraeus, Lieberman said that America’s challenge was to create a regional “anti-terror coalition” to fight Islamic terrorism, which should include moderate Arab nation-states and Israel. Mattis replaced Petraeus as CENTCOM commander in 2010.

According to the Israeli Ministry of Defense’s official communiqué, Lieberman told Petraeus that “the success of such a coalition will also provide the basis for a comprehensive regional resolution of the Arab-Israeli conflict which would include a resolution of the Palestinian issue [based on] a territory and population swap.”

Lieberman is a resident of the West Bank settlement of Nokdim. He is widely viewed as a hard-line right-wing Israeli leader and has consistently assessed the Palestinians as too weak to be able to address Israel’s security concerns in a bilateral peace deal. Importantly, what he told Petraeus was not that the conflict cannot be resolved, but rather that it cannot be resolved bilaterally. Instead, Lieberman views the moderate Arab states—Egypt, Jordan and Saudi Arabia—as the key to ending the present impasse. For that, however, they need to assume the role of the “responsible adults” by designing together with Israel a regional security system. Such a system would provide the framework for cooperation between those key Arab countries and allow Israel to offset the risks associated with the concessions it would need to make for a resolution of the conflict to be achieved. “For some 24 years the efforts to resolve the conflict bilaterally have been tried and failed,” the communiqué states. Thus, “the conflict will only be resolved in a framework of a comprehensive regional settlement.”

Lieberman’s advocacy of this idea is not new, but it has been repeatedly dismissed as an excuse for avoiding a serious bilateral engagement with the Palestinians. Yet the logic of the regional approach was always difficult to challenge. This is because two of the conflict’s core issues could never be resolved except in a regional framework: Jerusalem and refugees. Jerusalem is an issue because Jordan, Saudi Arabia and Morocco all have a direct interest—as well as a formal standing—in Jerusalem’s holy basin. Palestinian refugees are an issue that cannot be resolved without Arab states participating in the refugees’ permanent resettlement.

In the absence of a Henry Kissinger or Jim Baker–class architect, the idea of a regional framework for resolving the Palestinian-Israeli conflict has remained impractical at best. As a military officer who fought in the Middle East and a former commander of CENTCOM who knows the top echelons of the armed forces of Egypt, Jordan, Saudi Arabia and the smaller GCC states, Mattis is best positioned to attempt to construct the grand bargain that Lieberman desires.

Two final points: first, the official communiqué regarding Lieberman’s conversation with Petraeus was careful to mention that the most challenging aspect of his proposal—namely the bilateral Israeli-Palestinian dimension of the deal—would be based on “a territory and population swap.” This points to Lieberman’s often-repeated argument that if the primary imperative of resolving the conflict is demography, then the agreement should allow Israel not only to annex the large settlement blocks on which some 80 percent of Israeli settlers reside on less than 2 percent of the West Bank, but also to annex to the future Palestinian state the large Israeli-Palestinian population that resides in the so-called “triangle” adjacent to the 1967 line.

The complications associated with Lieberman’s particular land-and-population swap proposal are considerable, if not insurmountable, as it is unlikely that Israel’s supreme court would ever allow to disenfranchise hundreds of thousands of Arab-Israeli citizens. The relevant point here is that Lieberman’s suggestion is based on the same logic that underlined Mattis’s comments in Aspen: that the demographic issue needs to be addressed.

Finally, in advancing the design of a regional framework for resolving the Palestinian-Israeli issue, Mattis may find some Arab leaders to be more reluctant than others to assume the risks involved. That will not be surprising. Leaders often find it easier to complain than to assume the risks associated with the attempts to address the subject of their complaints. This is where the already-famous impatience of America’s new president may come handy. Trump has perfected the art of shaming and Mattis would be able to argue with moderate Arab leaders convincingly that a failure to support the U.S.-led effort would not be tolerated by America’s new leader. Thus, Trump’s unique character may yet prove an important asset in the heroic effort that would be required to resolve the Palestinian-Israeli conflict.