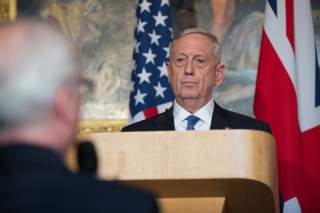 A group of lawmakers has begun pressuring Defense Secretary James Mattis to look into whether China’s effort to acquire additional access to the largest dedicated infrared telescope in the Northern Hemisphere would allow it to spy on some of the Pentagon’s space secrets.

House Armed Services Strategic Forces subcommittee chairman Mike Rogers and ranking member Jim Cooper, with chairwoman Elise Stefanik and ranking member Jim Langevin of the House Armed Services Emerging Threats and Capabilities subcommittee, sent Mattis an April 26 letter describing their concerns about the East Asian Observatory’s access to the United Kingdom Infrared Telescope on Wednesday. The Chinese Academy of Sciences funds the observatory in conjunction with Japan, South Korea and Taiwan. The foreign research group wants access to the telescope, which is leased by the University of Hawaii and operated under a Scientific Cooperation Agreement led by the University of Arizona.

Funding for the telescope will cease this year, and now university operators need a new money windfall so that they can continue using it to conduct research.

Lawmakers note in their letter that the University of Hawaii and its partners have been debating about accepting an East Asian Observatory offer to provide $1 million in funding a year for five years to keep the research wheels moving at Hawaii. Government documents obtained by the National Interest show that the multimillion-dollar offer would pay for about 50 percent of the telescope’s operations and maintenance costs. Both the government documents and lawmakers warn that in return for that funding the observatory wants “independent operation of UKIRT and access to previously collected data archives,” which is a “serious concern,” lawmakers explain to Mattis in their letter.

“Apparently, absent other competitive offers, the University of Hawaii would be inclined to accept the offer from EAO,” the letter states. “Therefore, we request you provide us further information on your assessment on the national security implications regarding foreign operation of this telescope, and as applicable, your short and long term plan to protect the related national security interests.”

The National Interest reported last week that  space experts are concerned that the East Asian Observatory funding offer would allow it to observe the unique details of U.S. space assets. Government documents show that the foreign research group would be able to see the electromagnetic waves emitted or received by an antenna, determine whether an antenna is active or not, find the position of artificial satellites, identify cooling and heating rates and spectral signatures, identify an object’s size, and gain access to other potential secrets. Additionally concerning is the conflict of interest surrounding the telescope’s cameras and spectrometers, which are restricted by International Traffic in Arms Regulations. A group of independent scientists raised this issue back in 2013, but their warning didn't gain traction with government officials until recently.

University of Hawaii spokesman Dan Meisenzahl previously declined to confirm whether the university has been in negotiations with the East Asian Observatory, but he made clear that legal restrictions make it unlikely that a foreign party would be able to gain independent access to the telescope. The university has worked with the observatory group in the past, but that relationship is not unique, he said.

Still, the pending investment alone is enough to rattle lawmakers on Capitol Hill. In their letter to Mattis they note that the independent scientists recommended that U.S. national-security interests should be a strong consideration in negotiating a new lease of the telescope.

China has a long history of looking for loopholes that would give them access to U.S. national security.

Last month, Fuyi Sun, a fifty-three-year-old Chinese national, pleaded guilty to violating the International Emergency Economic Powers Act after he was caught trying to illegally export to China a type of high-grade carbon fiber used primarily in aerospace and military equipment, according to a Department of Justice press statement. And last year Chinese national Su Bin pleaded guilty in 2016 to participating in a multiyear conspiracy to hack into the computer networks of major U.S. defense contractors and steal data relating to the U.S. military's C-17 transport aircraft and fighter jets. Bin, who was fifty years old when he admitted to the crime, had planned to share the stolen sensitive military and export-controlled data with China, according to a Department of Justice press statement.

Claims of foreign investments threatening U.S. national security sometimes come across as protectionism, yet at other times the warning flags are valid, Doug Bandow said. Bandow is a senior fellow at the Cato Institute and a former special assistant to Ronald Reagan.

“Past behavior would suggest that the Chinese may very well have legitimate scientific or commercial interest in something like this," Bandow said. "But they usually are aware of methods to take advantage of access to technology. Any deal should take that into account.”