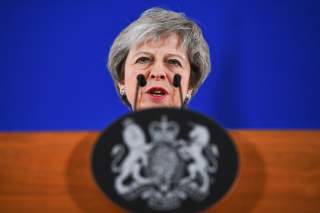 For a while now, the refrain in London has been that Theresa May is a prime minister “in office but not in power.” But even this stinging witticism was not enough to capture the situation yesterday, when May lost a House of Commons vote on her plan to withdraw from the European Union (EU) by a thumping 230 votes—the largest government defeat in over a century. It was a humiliating loss, with no fewer than 118 (over a third) of May’s own Conservative members of parliament (MPs) voting against her.

In normal times, May would be out of a job. But these are not normal times, and the prime minister looks likely to cling to office in the short term. One reason is that the Conservative Party’s rulebook says that leaders can only face one internal challenge per year, and May fended off such an attempt only last month. And so while some Tory backbenchers might be seething at May’s haplessness, they have lost the opportunity to replace her with a more effective colleague.

The only other way to topple the prime minister would be for her government to lose a vote of no confidence in the House of Commons. May will face exactly such a test later today. Yet despite her torrid time yesterday, the prime minister will probably defy the odds and secure the support of most MPs when push comes to shove. This is because even the most disloyal Conservative lawmakers prefer May’s leadership to a Labour government headed by their arch-rival, Jeremy Corbyn. The same goes for the Democratic Unionist Party (DUP), the small Northern Irish party that has been propping up May’s government since June 2017 (but voted against May yesterday).

And so it is that a prime minister who just suffered the biggest parliamentary defeat of any government in modern times and whose plan for exiting the EU—arguably the most important issue to face the country since World War II—has been trampled on by MPs from all sides, might yet still formally enjoy the confidence of the House of Commons and be tasked with taking Britain out of the EU. It is an absurd situation. The prime minister lacks all power, authority, credibility, trust, and respect—but lumbers forward regardless. She is an undead prime minister, defying the usual logic of political mortality.

Assuming she remains in office beyond the next few days, May will visit Brussels and discuss next steps with her EU interlocutors. For when all the dust has settled, Britain and the EU still need to finalize an agreement on how Brexit’s withdrawal from the EU ought to be managed. In May’s ideal world, the EU would agree to concessions hefty enough to change the political calculus of MPs in Westminster. However, all signs are that EU negotiators will not budge on the main tenets of the withdrawal agreement, which they point out has already taken years to negotiate.

One obvious possibility is that May will try to buy more time by asking the EU for an extension to the two-year negotiating period, which is due to expire in March. Indeed, there are reports that Brussels has been preparing for just such an outcome. On its face, this makes a lot of sense: two months is probably not long enough for Britain’s leaders to find common ground, and so more time will be needed. But more time for what? The EU has already made it clear that there can be no question of revising the existing withdrawal agreement, which means any extra time would have to be spent beavering away at the home front. If yesterday’s vote is anything to go by, it is painfully unclear whether any amount of extra time would be enough to change the minds of the most skeptical MPs.

A more extreme option would be to call off Brexit altogether—if only for the time being. This would be deceptively easy to do: the European Court of Justice has already ruled that the government has the power to cancel the Brexit process—“exit Brexit”—if it so chooses. This option has the advantage of being wholly in the gift of the British government (i.e., it would not depend upon the EU’s agreement) but, if tried, it would almost certainly provoke uproar among Conservative MPs and the country at large. (This “nuclear option” could be deployed as a specter to frighten pro-Brexit MPs into backing May’s withdrawal agreement.)

Third, May could ask Parliament to relinquish control over Brexit and pass the buck to the electorate. This could take the form of a fresh election (in hopes that a newly assembled set of MPs might be able to settle upon a way forward) or a second referendum (the so-called “People’s Vote” option). Both options would be mechanisms to “take the temperature” of the electorate and thus glean some sort of guidance for parliamentarians to act upon.

At the moment, however, there appears to be no parliamentary majority for holding a second referendum, not least of all because there would have to be extensive wrangling over what question to put to the electorate. And there is even less chance of two-thirds of MPs voting for a fresh election (the number required by the Fixed-Term Parliaments Act). While the Labour Party leadership might be champing at the bit, the same cannot be said of those nervous Conservative and DUP MPs who fear losing power to Labour if an election is held under present conditions.

This leads to the fourth option, of Britain “crashing out” of the EU without any deal in place to soften the blow. This is actually the default option, and will happen automatically on March 29 unless Parliament enacts legislation to avert it. A clear majority of MPs regard this “no-deal Brexit” outcome as something akin to economic Armageddon: it would lead to chaos at Britain’s ports of entry, uncertainty over supplies of goods (including food and medicine), and a whole host of costly legal issues. But as May found out yesterday, pulling together a parliamentary majority in favor of an alternative plan is no easy task. No-deal Brexit is thus a real possibility.

The problem is that a sizable minority of MPs—mostly Conservatives, but also perhaps the DUP and a small group of Labour rebels—would happily see Britain crash out of the EU in a chaotic fashion if the alternative was to halt or cancel Brexit. To these hardcore Brexiters, the most important thing is that Britain leaves the EU—whatever the cost. Although they are relatively small in number, this hardcore group of Brexiters is still large enough to wield an effective veto over anything that May proposes unless the prime minister can reach a modus vivendi with the opposition Labour Party. As of yet, there have been no efforts at cross-party bridge-building.

There is a fifth option, however: that May’s deal could pass at a second attempt. While this might seem terribly unlikely at the moment, given the scale of May’s recent defeat in the House of Commons—a whopping 116 MPs would have to change their minds in order for May’s deal to pass if put to another vote—it could feasibly happen if enough MPs become fearful of the two extremes outlined above: no Brexit and no-deal Brexit. Either the hardline Brexiters could be persuaded to swallow May’s deal as a way to secure Brexit in at least some form, or else a group of (Labour) moderates could be cajoled into supporting the deal to avert a no-deal calamity.

It is impossible to know which, if any, of these options will play out. None of them enjoy broad-based support in Parliament or the country at large. None of them are painless. Instead, MPs must choose from a menu of undesirable and divisive options. Right now, they are having extreme difficulty settling on a choice. But at some stage before March 29, Britain’s leaders must come to a collective decision on what they want, not just what they don’t want.