McCain's on the Warpath... Again 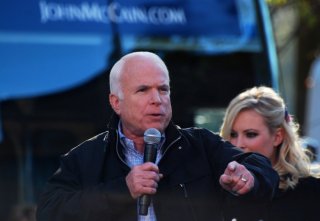 The Republicans have yet to take control of the Senate, but Senator John McCain isn’t waiting.

McCain has always been a reliable critic of the Obama administration, and has at times freelanced his own foreign policy. Still, in the month since the GOP’s midterm election victory, McCain has been on the warpath.

Most notably, on Wednesday, McCain sparked a diplomatic crisis with Hungary, a NATO ally of the United States, when he called Hungarian prime minister Viktor Orban a “neo-fascist.” Speaking on the Senate Floor, McCain slammed Orban and claimed that Hungary “is on the verge of ceding its sovereignty to a neo-fascist dictator, getting in bed with Vladimir Putin.” To ensure he got his point across, the Republican senator reiterated these points in a statement later released by his office.

As one would expect, Hungary reacted with indignation. Soon after McCain’s comments were reported, the foreign ministry in Budapest summoned the U.S. chargé d’affaires over McCain’s comments. It also directed the Hungarian embassy in Washington to contact McCain’s office.

While refusing to comment on whether it had been in touch with McCain’s office yet, a spokesperson for the Hungarian embassy told the National Interest: “Orbán has been democratically elected and Hungary is a functioning democracy, a member of NATO and the EU, and an ally of the United States…. Accusing the government of going to bed with Putin is absurd and alleging that the Hungarian PM is a ‘neo-fascist dictator’ is not based on any evidence and is totally unacceptable to the government of Hungary.”

The State Department also disavowed McCain’s comments. State Department spokeswoman Marie Harf told reporters on Wednesday, “I think it’s no surprise that there are a number of views Senator McCain has espoused that we don’t share…. I would put this in that category.”

But as Harf was quick to note, it’s ultimately less about what McCain said and more about how he said it. The Obama administration has long been warning about the democratic backsliding in Hungary under Orban, and has increased its criticism in recent months. For example, in his speech to the Clinton Global Initiative in September, President Obama listed Hungary as a country where “endless regulations and overt intimidation increasingly target civil society.”  The following month the administration announced visa bans on six Hungarian officials for suspected corruption. As Harf put it, the administration shares some of the same concerns as the Republican senator, but “wouldn’t share the same words that Senator McCain did.”

This is characteristic of neoconservatives, who often display a willful neglect, if not outright hostility, for diplomatic tact, which has been particularly damaging to their ability to manage allies. Indeed, McCain’s diplomatic squabble is not completely dissimilar from the one former Defense Secretary Donald Rumsfeld sparked when he chastised “old Europe” for not supporting the invasion of Iraq in 2003, and claimed NATO’s center of gravity was shifting eastward.

McCain’s neo-fascist remark was made during a disparaging rant on the Senate floor over President Obama’s nominee to be the next ambassador to Hungary. In the case of many of President Obama’s ambassador choices, it’s hard to blame him. While presidents have long rewarded political supporters with ambassadorships, some of Obama’s choices have been especially cringeworthy.

The new U.S. ambassador to Hungary, for instance, is Colleen Bradley Bell, a longtime producer of the popular soap opera, The Bold and The Beautiful. Bell “earned” her diplomatic posting by raising $2 million for Obama’s reelection campaign. McCain first clashed with Bell (and many of other Obama bundlers-turned-ambassadors) during her confirmation hearing last winter, when McCain stumped Bell with the “gotcha” question of “What are our strategic interests in Hungary?” And Bell wasn’t even the least qualified nominee at that particular hearing!

McCain’s evisceration of hack ambassadors is an admirable example of the Senate performing its constitutional “advice and consent” duties. However, some of his other inroads into administration personnel decisions have bordered on the ridiculous.

Such was the case last week when McCain released a statement praising Chuck Hagel’s tenure as secretary of defense and slamming Obama for “micro-managing” him before forcing him to resign. The merits of the criticisms were not the issue; the messenger was. McCain did not just personally oppose Hagel’s confirmation as secretary of defense, a position that has rarely faced much scrutiny from the Senate. Much more importantly, McCain led the way in mounting the first successful filibuster of a cabinet-level official in American history.

Even before then, during Hagel’s extraordinary long and tense confirmation hearing, McCain had the most confrontational exchange with Hagel. This was prompted by McCain’s demand that the former senator from Nebraska acknowledge the Iraq surge had been an unqualified success. Hagel refused and McCain went on to spearhead the filibuster campaign to block his confirmation. Subsequent events in Iraq have vindicated Hagel.

Furthermore, even after he relented on actively blocking a vote on Hagel’s nomination, McCain still argued that “I don’t believe he is qualified” to be secretary of defense. McCain’s close friend and colleague, Lindsey Graham, went further calling Hagel, a former Republican senator, “one of the most unqualified, radical choices for secretary of defense in a very long time.”

In his defense, McCain has gone out of his way to help the White House avoid a similar crisis for Hagel’s successor. For example, McCain recommended President Obama select former Sen. Joe Lieberman (I-Conn.) to be Hagel’s successor. More realistically, he voiced his support for Ashton Carter before the latter had been officially nominated.

Still, McCain’s suggestion—which was only given at the White House’s request—that Obama pick Lieberman as the his defense secretary is telling in that Lieberman would have almost certainly been secretary of defense in a McCain administration. Although the Senate has a constitutional duty to advise and consent, they are only expected to reject candidates who are completely unqualified for the positions for which they’ve been nominated, not because they wouldn’t have been nominated if they were president.

But this seems to be precisely what McCain is doing now. It’s hard to reach a different conclusion after McCain announced on Thursday that he is placing a hold on Tony Blinken, whom Obama nominated to be the next deputy secretary of state.

Like Hagel, McCain initially claimed he was blocking Blinken’s nomination because “He's totally unqualified,“ an extraordinary claim from someone who once deemed Sarah Palin fit to be the vice president of the United States. Unsurprisingly, McCain later admitted to Reuters that he was blocking Blinken’s nomination because he disagreed with his views on Iraq. Once again, McCain has redefined qualified to mean whether one agrees with his views.

Denying Blinken the position of deputy secretary of state because of his views on Iraq would be perfectly reasonable—if McCain were president.

Zachary Keck is Managing Editor of The National Interest. You can find him on Twitter: @ZacharyKeck.