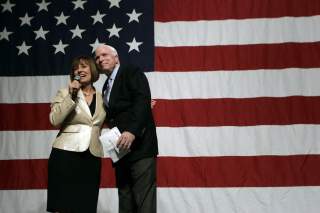 I met John McCain when he was Navy Liaison to the Senate, and became friendly with him when he moved to the House of Representatives, in part because he succeeded one of my heroes in Congress, John Rhodes, a fierce partisan and strong party leader who retired in part because his Republican Party, with a new collection of junior firebrands like Newt Gingrich, moved in a direction that he did not enjoy. McCain in the House was also a firebrand—hot-tempered, volatile and intense—but his deep dedication to the institutions of governance and to the regular order were evident then. That dedication to the regular order, at a time when the majority Democrats did not give a lot of attention or deference to the minority Republicans, often triggered an intense response.

I was not always comfortable with McCain’s approach, language or policy positions—he was a sharp-edged conservative—but for all the reasons people now recognize his extraordinary persona, I liked him immensely, and admired him for his deeper values. Back then, I knew he had been a POW during Vietnam, but I really did not know the details and he never talked about it.

I was not a close friend of John’s—more a friendly acquaintance—when he moved to the Senate. But I had enough of a strong relationship with him that I could get in to see him readily when I wanted to do so. That got me an audience in 1997 to talk about campaign-finance reform. I went in to his office with trepidation. My message was not a comfortable one. McCain had by that time become the leader in the movement for campaign-finance reform, with his bipartisan bill done with Democrat Russ Feingold. McCain-Feingold, as it was called, was the vehicle embraced by reform groups and lauded on the editorial pages of the New York Times and Washington Post.

But it was a flawed bill. Its core was public financing of elections accompanied by spending limits, both planks that would get unstinting opposition from most Republicans and could not pass muster with the Supreme Court under the standard set by Buckley v. Valeo. I had convened a small working group of scholars and practitioners with the goal of coming up with a practical bill to aim directly at the major problems in the system—unlimited soft money, and a loophole in the Buckley decision that enabled outside groups to spend unlimited sums, undisclosed, on sham “issue ads,” which were not even thinly disguised campaign ads.

I took our product to McCain with trepidation. I was telling him his baby was flawed and needed to be significantly modified. I had visions of being thrown out of his office on my ear. Instead, John listened carefully, asked a bunch of pointed and informed questions, and then made his position clear: he did not want a symbolic issue with accolades. He wanted a law, with genuine reform to alter the corrosive role of big money in campaigns. Feingold agreed, to his great credit since he was going to get pushback himself from the left, and the bill was indeed changed to reflect the practical concerns.

Of course, it was still staunchly opposed by Mitch McConnell, who was furious with McCain for challenging his authority. As if that would deter John McCain. There were plenty of setbacks from that time forward, but almost miraculously, with McCain’s dogged efforts, it got enacted into law with George W. Bush’s acquiescence, and then, in 2002, it was embraced by the Supreme Court.

The sorry history of dark money in campaigns has been made more sorry with the subsequent Citizens United decision along with its progeny—things that would not have happened if Sandra Day O’Connor had not resigned prematurely from the Supreme Court. But this piece is not about campaign-finance reform. It is about John McCain, who wanted to do the right thing and not just the popular thing, who fought tooth and nail to make it happen, and who always had an open door for me to discuss other reform issues.

I was fortunate to get to know the man, not just the legislator. When I read the remarkable book The Nightingale’s Song by journalist Robert Timberg, which detailed graphically the gruesome, unspeakable torture McCain suffered in the Hanoi Hilton, I was able to talk to him about it. I said that I would not have lasted thirty seconds; he talked to me about the human spirit and the resilience he was sure I had, as he had shown, when one’s fundamental values and love of country are on the line. I was with him in his office when we learned that our mutual friend David Ifshin, a radical anti-Vietnam War activist who broadcast from Radio Hanoi into the Hanoi Hilton when McCain was there, but who had bonded subsequently with John, died of cancer at age forty-six. We talked about human relationships, about the need to understand and forgive, to build bonds out of acrimony. His eulogy at David’s funeral was simply inspiring.

As so many have said since his illness, John could be maddening. I disagreed profoundly with many of his votes, positions and actions, not just the selection of Sarah Palin. But so what? John believed in facts and science, in the importance of rules and laws, of compromise through debate and deliberation. If he had been elected president, then he would have governed with integrity and probity, representing all of us and America’s core values. He would have been a superb president, protecting our security, our interests, and the most vulnerable among us—a sharp contrast with the current occupant of the office.

John was an extraordinary man, a man of values, courage, integrity, a patriot who put country over party and meant it, who tried every day to learn from his flaws and mistakes, who made sure that he built bonds with lawmakers across the aisle because it was the right thing to do and the way to solve our problems and make our political system work as intended. If my life was on the line, there is no one I would rather have by my side than John McCain. He leaves a deep hole at a time when we need him more than ever.

Norman Ornstein is a resident scholar at the American Enterprise Institute.