Is McCarthy About to Declare War on Democrats? 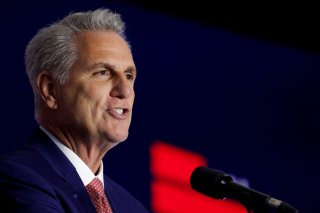 In a speech at the Republican Jewish Coalition conference in Las Vegas this past weekend, Rep. Kevin McCarthy (R-CA), the likely incoming speaker of the House, doubled down on a promise he made earlier this year to strip progressive Rep. Ilhan Omar (D-MN) of her committee assignments, particularly her seat on the House Foreign Affairs Committee, if he were to get the speaker’s gavel.

Back in January, McCarthy pledged to remove three Democrats—Reps. Adam Schiff (D-CA) and Eric Swalwell (D-CA), along with Omar—from committees, in retaliation for Democrats voting to remove Rep. Marjorie Taylor Greene (R-GA), from her posts on the Budget Committee and the Committee on Education and Labor in 2021. Speaking on Saturday, McCarthy, the current House minority leader, said, “I remember what she said about Israel. I remember what she said about the relationship. I remember it so much that I promised you last year that as speaker, she would no longer be on Foreign Affairs. I’m keeping that promise.” He repeated the threat the following day in an appearance on Fox News.

The roots of the Right’s animosity toward Omar are pretty obvious. Omar, one of the few incisive critics of U.S. foreign policy and one of only two Muslim women (and three Muslim people) in Congress, has been a frequent target of attacks from Republicans. She has been accused of anti-Semitism a number of times; in a tweet sharing the video from his recent speech, McCarthy called her “anti-American.” Former president Donald Trump told her and three other Congresswomen to “go back” to the countries they came from in 2018.

Some of the past smears, notably Taylor Greene’s attack last year in which she called Omar “pro-Al-Qaeda” and “bloodthirsty,” and Rep. Lauren Boebert’s (R-CO) suggestion that Omar was a terrorist, have been blatantly Islamophobic. Omar has also displayed a rare willingness to criticize the effects of American foreign policy broadly, and its relationship with Israel in particular.

Omar addressed this history of attacks in a statement released Monday, which read in part, “From the moment I was elected, the Republican Party has made it their mission to use fear, xenophobia, Islamophobia and racism to target me on the House Floor and through millions of dollars of campaign ads.”

The statement pointed out the presence of anti-Semitism from GOP members, before continuing,

McCarthy’s effort to repeatedly single me out for scorn and hatred—including threatening to strip me from my committee—does nothing to address the issues our constituents deal with. It does nothing to address inflation, healthcare, or solve the climate crisis. What it does is gin up fear and hate against Somali-Americans and anyone who shares my identity, and further divide us along racial and ethnic lines. It is a continuation of a sustained campaign against Muslim and African voices, people in his party have been trying to ban since Donald Trump first ran for office.

Schiff and Swalwell—both of whom were harsh critics of Trump but whose politics have tended to be more centrist than Omar’s—also hit back at McCarthy over his threats.

Jeremy Slevin, the senior communications director in Omar’s office, said on Twitter that “This has nothing to do with antisemitism and everything to do with silencing her by any means necessary."

For McCarthy, the threat may also stem from a desire for retribution for some personal attacks. In his talk in Las Vegas, the congressman said that he “remembered what she said about [him],” presumably referring to Omar’s past tweet which said that McCarthy’s support for Israel was “all about the Benjamins.”

McCarthy’s lumping in of the two congressmen from California may be intended to shield him from being called sexist, racist, or Islamophobic, but it simultaneously makes it easier for Democrats to argue that the attacks are being purely driven by politics, rather than due to some kind of principled stand against anti-Semitism. In some past instances, other Congressional Democrats have remained silent or even joined Republicans in their condemnation of Omar.

This whole ordeal also offers an indication of how McCarthy might run Congress if he does indeed control it for the second half of President Joe Biden’s term. Various Republican members of the legislature have stated that they will seek to impeach Biden, though the impetus for impeachment remains unclear. Republicans have also indicated a desire to investigate the president’s son, Hunter, and his chief medical advisor, Dr. Anthony Fauci. On Tuesday, McCarthy teased a “major” announcement about Alejandro Mayorkas, the secretary of homeland security, during his visit to the border. Some have suggested that McCarthy will announce that he plans to impeach Mayorkas.

In a split Congress, and with a Democrat in the White House, any legislative ambitions that McCarthy may have for the next two years will be limited. If his threat towards Omar and other early actions are any indication, if he becomes the speaker, McCarthy will be motivated largely by political warfare.

Blaise Malley is an Associate Editor and writer at The National Interest. His work has appeared in The American Prospect, The American Conservative, Responsible Statecraft, and elsewhere. Follow him on Twitter @blaise_malley.