McConnell Says 'Case Closed,' But is It? 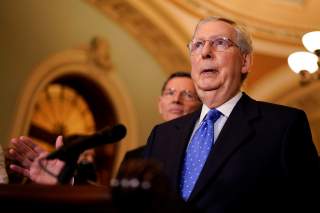 The two-word Republican mantra has changed from “no collusion” to “case closed.” This morning, Senate Majority Leader Mitch McConnell (R-KY) expounded on the congressional Republican near-consensus.

With the conclusion of the special counsel investigation, congressional Republicans believe it’s time to move on. McConnell quoted the primary conclusion of the Mueller Report, that “the investigation did not establish that members of the Trump campaign conspired or coordinated with the Russian government in its election interference activities.” McConnell referred to the Democratic Party’s repetitious questioning of the 2016 election results as a kind of “Groundhog Day spectacle.” That’s because the opposition party was busy going through the “five stages of grief.”

The meat of the speech focused on former President Barack Obama’s record in office and advocating that the United States take a harder line against Russia. McConnell gave freshman Senator Mitt Romney (R-UT) a pat on the back for his well-tread admonishment of Obama’s treatment of Russian-American relations during a 2012 presidential debate. This is odd, since the same Senator Romney referred to his own reaction to the Mueller Report’s conclusions as “sickened at the extent and pervasiveness of dishonesty and misdirection by individuals…including the president.” According to the Senate majority leader, Obama’s approach “could have used more Ronald Reagan, and less Jimmy Carter.”

“So, remember, Russia set out to sow discord. To create chaos in American politics and undermine confidence in our democracy,” Mitch McConnell said. “But on that front, given the left’s total fixation on delegitimizing the president Americans chose, and shooting any messenger who tells them inconvenient truths, I’m afraid the Russians hardly need to lift a finger.”

McConnell praised the tough stances taken by the Trump administration since 2017. This includes criticizing the Nord Stream 2 pipeline between Russia and Germany, enforcing a “red line” in Syria by bombing the Assad government twice, and withdrawing from the Intermediate-Range Nuclear Forces (INF) Treaty. The latter is an odd comment, since it was President Reagan (McConnell’s erstwhile example of a great leader) who signed the INF Treaty in 1987. These comments are also contrary to Donald Trump’s longtime preference to “get along with Russia.”

Since Special Counsel Robert Mueller, the liberal “secular saint,” was unable to deliver the coup de grace, Democrats are “angry that the legal system won’t undo the 2016 election for them.” While “[t]he facts let them down,” McConnell believes that politically the Democrats have to keep feeding the “Outrage-Industrial Complex.” That is why they’ve fixed their ire on Attorney General William Barr. The controversy over Barr’s conduct since the conclusion of the report is nothing more than the Democrats finding a new target. According to McConnell, since the administration didn’t prematurely end the investigation and instead of sitting on the final report released it expeditiously to the public, any accusation of obstruction of justice doesn’t hold water.

“Case closed,” pronounced McConnell. Calling any threat of impeachment “laughable,” he made it clear that under these circumstances’ Senate Republicans would not vote to remove the president if the Democrats chose to pursue him. Whispers of dissatisfaction and defections, made louder after recent bipartisan votes that bucked the president (see TNI’s coverage here and here), were silenced. Speaker of the House Nancy Pelosi (D-CA) continues to say that investigations into the Trump administration should take a backseat to pushing for Democratic policy, which she believes has a better chance of winning voters in the 2020 presidential election. Public support for impeachment proceedings and new investigations remains far below a majority.

Hunter DeRensis is a report at The National Interest.