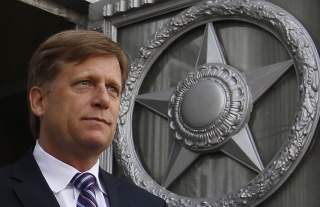 FOREIGN POLICY REALISM has always straddled the worlds of diagnosis and prescription, offering both a means for understanding how states behave in an anarchical international system and an approach to formulating policy rooted in unsentimental calculations of power relations and national interest. In the case of Russia, a number of realists cautioned that post-Soviet Moscow would react defensively to NATO expansion and to America’s insistence that it has both the right and the obligation to spread democracy in Russia and beyond. In retrospect, their predictions that Russia would draw closer to China and push back against U.S. interventionist policies with increasing strength as it recovered from its post-Soviet collapse appear accurate. As George F. Kennan observed about NATO expansion: “There is going to be a bad reaction from Russia, and then [the NATO expanders] will say that we always told you that is how the Russians are—but this is just wrong.’’ In Kennan’s view,

The ways by which peoples advance toward dignity and enlightenment in government are things that constitute the deepest and most intimate processes of national life. There is nothing less understandable to foreigners, nothing in which foreign interference can do less good.

While realists may have done a good job of anticipating Russian behavior, they have been far less successful in predicting and shaping America’s own. Even nonrealists would acknowledge that it does not serve U.S. interests to prompt Moscow and Beijing to overcome their longstanding mutual suspicions and cooperate against Washington, yet that is what American policies have effectively done. Moreover, the extraordinary animosity plaguing the current relationship between the United States and Russia cannot be explained simply by pointing to divergences in their respective national interests or values. Several other prominent American relationships also feature significant conflicts of national interests and values gaps, including those with China and Saudi Arabia. But the U.S.-Russian relationship is teetering on the edge of outright conflict. What went wrong?

Stanford University Professor Michael McFaul—who served in the Obama administration first as a senior National Security Council staffer and later as U.S. ambassador to Russia—seeks to offer an answer in his new memoir, From Cold War to Hot Peace: An American Ambassador in Putin’s Russia. In McFaul’s account, America bears some small measure of responsibility, but Vladimir Putin and Russia’s authoritarian turn are the main culprits. He traces the evolution of the current bilateral mess from Gorbachev through Yeltsin to Putin, arguing that the U.S.-Russian relationship would be in a much happier place had a different leader—such as slain opposition figure Boris Nemtsov—wound up in the Russian presidency and a more democratic political system taken hold in Moscow. Putin’s zero-sum world view and need for an external enemy to justify internal repression have fueled his anti-American approach and led directly to the situation we now face. McFaul is not without what he calls old-fashioned Montanan optimism, suggesting that harmony can return to the relationship once Putin has departed from the scene. Underlying this optimism, however, are some questionable assumptions: that Putin is an outlier on Russia’s political spectrum, rather than a reflection of its center of gravity, history and traditions; and that a more democratic Russian government would align more closely with American policy preferences.

McFaul’s book impressively melds his personal experiences in Russia with political theory into a smoothly flowing narrative. He leads readers on a grand march through Russia’s post–Cold War history and provides a front-row seat to a series of White House and Kremlin meetings that addressed great affairs of state. He is remarkably candid about his struggles to wear the hats of both dispassionate academic and ardent activist, and wrestles openly with his difficulty as a government official in balancing engagement “with both Russia’s government and civil society.” He details a long list of Russia’s accusations against him for interfering in its domestic affairs as ambassador and acknowledges that he made some missteps in dealing with the Kremlin-orchestrated campaign of harassment against him in Moscow. But he is unapologetic about throwing himself enthusiastically into the midst of Russia’s democracy movement earlier in his career as a trainer, coach, adviser and organizer, which he contends was not “meddling,” but rather an effort to put himself on the “right side of history.”

McFaul displays an admirable willingness to engage in self-criticism, acknowledging that both he and the U.S. government made important mistakes in dealing with Moscow, some of which contributed to Russia’s decision to ban him from returning to the country. But his criticism is of the tactical rather than strategic variety. He indicates that he should have recognized earlier, for example, that Russia’s economic reforms need not take precedence over building democracy, and that America should have recognized the dangers of not doing more to support and consolidate Russia’s democratic revolution. Our failures, he suggests, need not prompt us to rethink our evangelism; America both can and should spread democracy. It just needs to do so more effectively.

According to McFaul, the liberal internationalist school erred in execution, not conception. In pointing his finger at the Kremlin, he underplays the inherent tensions in pursuing a transformational agenda in Europe and the Middle East while trying to assuage Moscow’s fears that Washington is seeking regime change in Russia itself. Moreover, his diagnosis of the problems plaguing the U.S.-Russian relationship offers few clues about the way forward. If cooperation on shared concerns in the world cannot move forward absent democratic change inside Russia, and Putin has made encouraging such change from the outside all but impossible, what then is Washington to do, beyond hoping that change happens soon? His answer—a combination of “select containment” of the Russian government and “select engagement” with Russian society—has largely been tried and failed. Skeptics of McFaul’s eupeptic approach might well argue that doubling down on a losing approach makes for long odds of success.

One of those skeptics is Keith Gessen, a professor of journalism at Columbia University, who looks at the problematic U.S.-Russian relationship through a similar conceptual lens—that of the importance of individuals and leadership in shaping foreign policy—but offers a different take on where fault lies. In a recent article in The New York Times Magazine, “The Quiet Americans Behind the U.S.-Russia Imbroglio,” he suggests that one place to look for answers to why the U.S.-Russian relationship went so wrong—though far from the only one—is within the philosophical battles inside the small American community of “Russia hands.”

Three things stand out about this community. First, it has suffered a precipitous decline in expertise, prestige and talent since the Cold War. America’s Soviet-watchers constituted a large and deeply expert cadre that stood at the pinnacle of the policymaking community and dominated international relations and comparative government faculty in academia. By comparison, America’s Russia-watchers of today are a smaller, less expert and less respected group. As the older generation of Russia hands has retired or left the field for greener pastures, few of the best and brightest in the new generations have entered the Russia profession. Like McFaul, many of those that did choose to work on Russia focused on what became known as “transitology,” the study of how states transition from authoritarian governments and state-controlled economies to free-market democracies.

Second, Russia hands have lost considerable bureaucratic clout within the U.S. policy process. As Yeltsin-era reforms morphed into authoritarian revanchism under Putin, the excitement of building a brave new democratic order in Russia waned. Russia increasingly became an afterthought in interagency discussions of higher U.S. priorities in Europe, the Greater Middle East and East Asia. “Russia was unique in that it’s a country that was a factor in almost all the major things the U.S. government did, but it wasn’t in any place the most important factor,” explains Thomas Graham, who served as Senior Director for Russia on the National Security Council staff under George W. Bush. In the Cold War period, Gessen writes, U.S. foreign policy was focused on the Soviet threat, and Russia hands frequently took the lead, but in the post-Soviet era the reverse has been true. Moscow was often seen as too prone to stake out positions opposing U.S. policies, and too weak to matter much when it did protest. To a significant degree, the course of U.S.-Russian relations has been shaped by decisions made about other issues in which America’s Russia hands were secondary players.

Most important, Russia hands have been dominated by what Gessen calls “two powerful strains of internationalist thinking,” the radical “neoconservatives,” who call for universal democratization by force if necessary, and the moderates, who believe the United States should spread democracy as far east into Eurasia as possible through encouragement and support rather than force-feeding. Michael Kofman, a U.S. expert on Russian military affairs, puts it more colorfully:

There are the nice missionaries who knock on your door and say, “Hey, have you heard the good news about democracy, freedom and liberalism?” And then there are the crusaders who are trying to claim the heathen Eastern European lands for democracy and freedom.