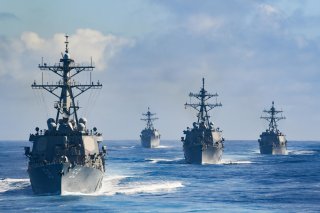 Since the People’s Republic of China’s (PRC) inception over seventy years ago, China’s reunification with Taiwan has been its paramount foreign policy objective. Chinese president Xi Jinping has made repeated statements that China’s patience for Taiwan to accept its offer of peaceful reunification is running out. Over the past two decades, China has greatly increased its amphibious assault capabilities. Meanwhile, the frequency and scale of Chinese fighter and bomber incursions into Taiwan’s Air Defense Identification Zone (ADIZ) during the past year have been unprecedented, with more than 1,400 incursions, accompanied by large People’s Liberation Army Navy (PLAN) exercises off the coast of Taiwan, since Joe Biden became president.

Last month, Beijing took the unprecedented step of claiming full sovereignty over the Taiwan Strait and warned the United States against any attempt to circumnavigate it with its warships without its permission. The Biden administration has expressed concern that China would take military action against Taiwan within the next eighteen months, including a blockade of foreign ships sailing in and out of the Taiwan Strait. In response to the increasing threat, the Biden administration has dispatched a carrier battle group led by the USS Ronald Reagan to take a position east of Taiwan in an attempt to deter such Chinese aggression.

Now, there are indications that Beijing may use House Speaker Nancy Pelosi’s visit to Taiwan as a convenient pretext to finalize preparations for a long-planned air and sea blockade of Taiwan under the pretext of “thwarting her conspiracy to support Taiwan secession and split China.” Amidst increasing tensions over her planned visit, Biden and Xi convened an urgent video conference on July 27 during Xi warned Biden against U.S. interference in China’s plans to reunify with Taiwan. “Those who play with fire will perish by it,” Xi said. “It is hoped that the U.S. will be clear-eyed about this.” Beijing’s readout added the statement that the PRC should be “prepared for the worst scenario, especially military preparation,” for a potential conflict with the United States.

China’s Global Times state media reported that its military is mobilizing for war in preparation for a potential pre-emptive attack against Taiwan in response to Pelosi’s visit. Further, it warned the United States against a military response, saying it would lead to a “severe military conflict.” It added that Taiwan will be where the United States finally shows its “true paper tiger face” and that China does not fear any escalation in the advent Washington decides to take military action against Taiwan. Not uncoincidentally, China began conducting major ground and naval live-fire exercises in the Taiwan Strait on July 30, the very day that Pelosi departed for her tour of Asia. Following Pelosi’s arrival yesterday, China announced the People’s Liberation Army (PLA) would hold “live fire” air and naval exercises surrounding Taiwan and intrude on the island’s territorial waters from August 4-7, placing the PLA in position to begin a blockade after the exercises conclude.

For the past several years, I have been predicting Chinese aggression against Taiwan would likely occur sometime between 2021 and 2025. Since that time, the correlation of forces has continued to shift in Beijing’s favor with China now possessing the largest army, the largest navy, and the largest coast guard with the largest economy in the world and a manufacturing industrial base nearly twice as large as the United States’. China has also fielded DF-17 hypersonic missiles, DF-21 and DF-26B anti-ship ballistic missiles, and extremely powerful electromagnetic pulse (EMP) weapons, which could disable entire U.S. aircraft carrier battlegroups or even knock out the entire electrical power grids of the United States and its allies.

While many analysts claim that Russia’s continuing invasion of Ukraine, which has lasted over five months thus far, has caused China to postpone its plans to invade Taiwan, the truth is likely the opposite; Russia’s invasion of Ukraine is actually serving to increase the incentive for China to begin military action against Taiwan to take advantage of the current U.S. military preoccupation in Europe. Last week, Sen. Chris Coons (D-DE) stated that Chinese leaders may have learned from the Russo-Ukrainian War that they need to “go early and go strong” before Taiwan is able to strengthen its defenses, adding that “we may be heading to an earlier confrontation — more a squeeze than an invasion — than we thought.” Xi is likely planning on a show of strength potentially including reunification with Taiwan before the twentieth Communist Party Congress in November. Such a historic accomplishment would help him secure an unprecedented third term as China’s president.

According to a recently leaked PLA military leadership video recording of a joint civil-military meeting that appears to be genuine, China is mobilizing its economy and military for war. This top-secret war mobilization meeting occurred on May 14 and discussed the need to convert 365 10,000-ton Roll-on Roll-off (RoRo) ships to carry tanks and vehicles for an amphibious assault role and recruit tens of thousands of additional troops by the end of June, suggesting that China may be contemplating major aggression later this year. Chinese leaders also discussed the need to protect the forward deployment of China’s nuclear missiles and to conduct naval and coast guard missions “outside the first island chain” formed by the Japanese islands, Taiwan, and the Philippines. This suggests China’s offensive plans may be much broader than merely securing Taiwan’s capitulation.

On May 23, the day after this Chinese military video clip went viral, Biden was asked if the United States would defend Taiwan militarily against Chinese aggression. He replied by stating, “That’s the commitment we made.” However, given Biden’s prudent refusal to send U.S. troops to fight Russia in Ukraine, it seems highly unlikely that Biden would order U.S. military forces to defend Taiwan from Chinese military aggression, especially if it did not include an actual Chinese invasion of the island nation.

According to the Department of Defense’s 2021 annual report on the Chinese military threat, China could attempt an air and naval blockade of Taiwan to coerce its surrender, likely accompanied by the seizure of Taiwan’s offshore islands and potentially missile strikes on key Taiwanese military targets such as anti-ship and surface-to-air missile sites. Any U.S. attempt to break the Chinese blockade would likely result in China firing on U.S. ships and aircraft, leading to the outbreak of World War III in the Pacific. China would claim that it was not blockading Taiwan but rather enforcing a quarantine upon its own sovereign territory, which is not considered an act of war under international law, further reducing the chances of a direct U.S. military response.

As noted in the report, such a Chinese air and naval blockade would likely be preceded by massive cyberattacks against Taiwanese critical infrastructure including an attempt to jam or disable their communication systems to cut off their access to the outside world. Chinese leaders might deny responsibility for widespread power, internet and communications failures in Taiwan, perhaps blaming non-state hackers. A recent spate of such failures in Taiwan might well have been a test run for this planned Chinese cyber offensive given that, just like America’s own electrical power grid, Taiwan’s power grid utilizes dozens of large Chinese transformers which likely have back-doors that enable the PRC to turn them off or provide false readings which can cause such widespread power failures without being able to detect foreign interference. Such a cyberattack could knock out Taiwan’s Command, Control and Communications (C3) system and disable GPS satellites, rendering it unable to coordinate its defenses. Further, it could disable its gas pumps, causing its military vehicles, aircraft, and warships to quickly run out of fuel along with its cars, trucks, and trains, paralyzing Taiwan’s food distribution system. It would also disable Taiwan’s running water and water purification systems while taking down its emergency medical, fire, and law enforcement services, resulting in a breakdown of law and order. This might cause Taiwan to capitulate to China within a matter of weeks.

However, there have been indications that China may be preparing to implement its blockade strategy against Taiwan much sooner while occupying various island groups surrounding Taiwan, including the Pacific islands far to the southeast. National security expert Jeffrey R. Nyquist has been warning about the increasing threat from the Sino-Russian military alliance for more than two decades. Nyquist recently interviewed a Chinese military expert associated with Lude Media, which disseminated the leaked video. Their most recent information confirms that the Chinese plan is likely to initiate a blockade, rather than invade, Taiwan beginning in August.

China would then invade a number of islands surrounding Taiwan along with largely undefended and mostly sparsely populated island nations in the first and second island chains. Potential Chinese targets for military occupation include the Japanese Senkaku Islands, Micronesia, Fiji, Kiribati, the Marshall Islands, the Solomon Islands, Nauru, Palau, Tonga, Tuvalu, Vanuatu, East Timor the Bismarck Archipelago, the Paracel Islands, the Spratly Islands, and Brunei. According to the Chinese military expert Nyquist interviewed, if the United States reacted with direct military force to Chinese aggression, then China would initiate conventional or even nuclear strikes on U.S. military bases in Japan, South Korea, the Northern Marianas, and Guam). If the U.S. responded by attacking mainland China, Beijing would retaliate with a nuclear first strike upon the U.S. homeland.