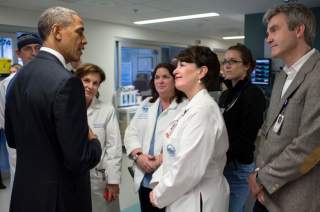 Medicare is still in trouble. The Medicare Trustees just issued their 2015 report. Like last year’s report, it says that the Hospital Insurance trust fund will enjoy a few years of surpluses, followed by deficits, ending in insolvency in 2030.

The trustees’ report is a bracing corrective to the complacency and demagoguery that often mars the ongoing Medicare debate. Facts, as President John Adams once remarked, are “stubborn” things.

The Big Fact is that Medicare, as currently constituted, is piling up enormous financial burdens for current and future workers. The Medicare Actuary says that taxpayers now face a Medicare unfunded liability ranging from $27.9 to $36.8 trillion. In plain English, this means that over the next seventy-five years (the so-called long-term “actuarial window”), Washington politicians have promised seniors tens of trillions of dollars of Medicare benefits that are not paid for. In other words, they’re running up a huge debt.

The $9-trillion difference between the two Medicare debt estimates reflects the necessarily broad range of uncertainty that must accompany such long-range projections. The lower number is based on the assumption that “current law” (such as Obamacare) remains intact; the higher number is based on a more realistic “alternative” assumption: that current law will not remain in force. In any case, both the trustees’ “current law” and the “alternative scenario” debt projections exceed last year’s estimates by more than $1 trillion. In short, Medicare’s long-term financial status worsened.

Real reform of the financially troubled Medicare program is still not a priority on Washington’s policy agenda. The president’s health law promises Medicare savings and improved health outcomes from various “delivery reforms,” but the jury is still out. CBO evaluations of previous reforms found them to be unimpressive.

The major Medicare changes enacted by the president and his congressional allies impose hundreds of billions of dollars in Obamacare payment reductions for medical professionals. Yet independent analyses by CBO and the Medicare Actuary—as well as independent, nongovernmental research organizations—suggest that such Medicare cuts are both unrealistic and unsustainable.

The largest share of Obamacare’s payment reductions will fall on Medicare Part A institutions: hospitals, nursing homes, home health agencies and even hospice-care organizations. If one assumes current law, say the Medicare trustees in this year’s report, “By 2040, approximately half of hospitals, 70 percent of skilled nursing facilities (SNFs) and 90 percent of home health agencies (HHAs) would have negative total facility margins, raising the possibility of access and quality of care issues.” [Emphasis added.]

For its part, Congress passed the Medicare Access and CHIP Reauthorization Act of 2015 (MACRA). The law repeals the sustainable growth rate (SGR) formula for updating Medicare physician payment and replaces it with an alternative physician payment system. Professional medical organizations desperately wanted the physician payment change, and liberals wanted the Children’s Health Insurance Program (CHIP) reauthorized. So, Congress not only increased Medicare spending, but also added an estimated $141 billion to the deficit over the next ten years.

For all of that, Medicare doctors and patients are likely to end up with a bad bargain. On page 2 of their report, the Trustees say, “While the physician payment updates and new incentives put in place by MACRA avoid the significant short range physician payment issues that would have resulted from the SGR system approach, they nevertheless raise important long-range concerns…The Trustees anticipate that physician payment rates under current law will be lower than they would have been under the SGR formula by 2048 and will continue to worsen thereafter. Absent a change in the delivery system or a level of update by subsequent legislation, the trustees expect access to Medicare—participating physicians to become a significant issue in the long-term under current law.” [Emphasis added.]

So, Republicans and Democrats in Washington are promising more, delivering less, piling up deficits and debt, reducing Medicare payments and threatening seniors with reduced access to care. That, in a nutshell, is the Medicare status quo.

There is a better way. Congress could borrow the best features of Medicare Part D, the drug program and the Medicare Advantage program, and create a defined-contribution (“premium support”) system for the entire Medicare program. With enrollees armed with a generous government contribution, health plans and providers would be forced to compete on a level playing field in the delivery of care.

This approach has a terrific record. The CBO reported that Part D drug costs came in at 50 percent below original projections, and its premiums have been remarkably stable. Medicare Advantage plans have shown that they can deliver Medicare’s traditional benefits cheaper than traditional Medicare itself, and the trustees now say that they are on track to enroll 35 percent of all Medicare patients by 2022. In 2013, the CBO reported that Medicare premium support, and the intense competition among health plans and providers inherent in this approach, would save serious money for both seniors and taxpayers alike.

Real Medicare reform, based on the free-market principles of choice and competition, would realign economic incentives of plans and providers, drive innovation and productivity, improve health outcomes and enhance patient satisfaction.

Congress can, of course, elect to do nothing. Seniors can then taste, first hand, reduced access to quality health care, and taxpayers can experience crushing taxation and massive debt. There will be plenty of blame to go around. Politicians are good at that.